Story “For Some, Online Persona Undermines a Résumé,” in today’s Times, quotes Washington University in St. Louis Vice Chancellor Mark Smith, “‘I think students have the view that Facebook is their space and that the adult world doesn’t know about it. But the adult world is starting to come in.'”

Back in December, I blogged about the kind of things that kids reveal online that they shouldn’t. After all, it’s information predators might be hungary to get. But employers are a concern, too, and their reaction can profoundly affect young adults’ lives.

Regardless of the audience, predators or employers, people that reveal too much on blog or social sites can find themselves in a heap of trouble (I’m dropping the “networking” from “social.” It’s oh-so last week, already).

One recruiter checked out a job prospect’s Facebook and there “found explicit photographs and commentary about the student’s sexual escapades, drinking and pot smoking, including testimonials from friends. Among the pictures were shots of the young woman passed out after drinking,” according to the Times story. The recruiter wasn’t pleased. “‘O.K., so much for that.'” (By the way, since we’re briefly discussing “the young woman passed out,” I highly recommend The Center on Alcohol Marketing and Youth report: “Underage Drinking in the United States: A Status Report, 2005.” Chart is from the report.) 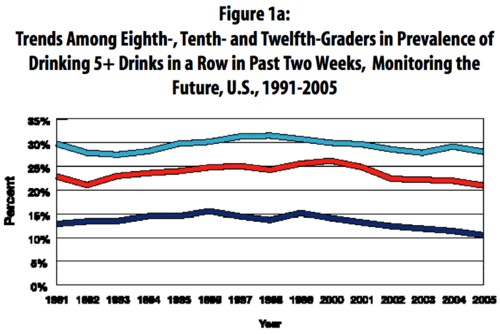 People have to be wise about this stuff, even though it stinks of double standard. Companies employ lots of people with bad habits—they may not be on public display somewhere. So, if a company shows interest in two candidates with some disdainful habits, one doesn’t get the job simply because his or her personal life is more public but the other is hired because his or her sins, so to speak, are hidden?

The broader issue is one of privacy. You don’t have any. Laws already give employers the right to everything—including e-mail sent on their servers. But that openness—some might call invasiveness—doesn’t necessarily stop there. If a potential employer can Google you, be wary of what he or she might find.

The Times story, by reporter Alan Finder, quotes Experience CEO Jennifer Floren, “‘This is really the first time that we’ve seen that stage of life captured in a kind of time capsule and in a public way.'”

Word to the wise: Behavior tolerated in a frat house is more likely to be viewed like a cat house if put up online.