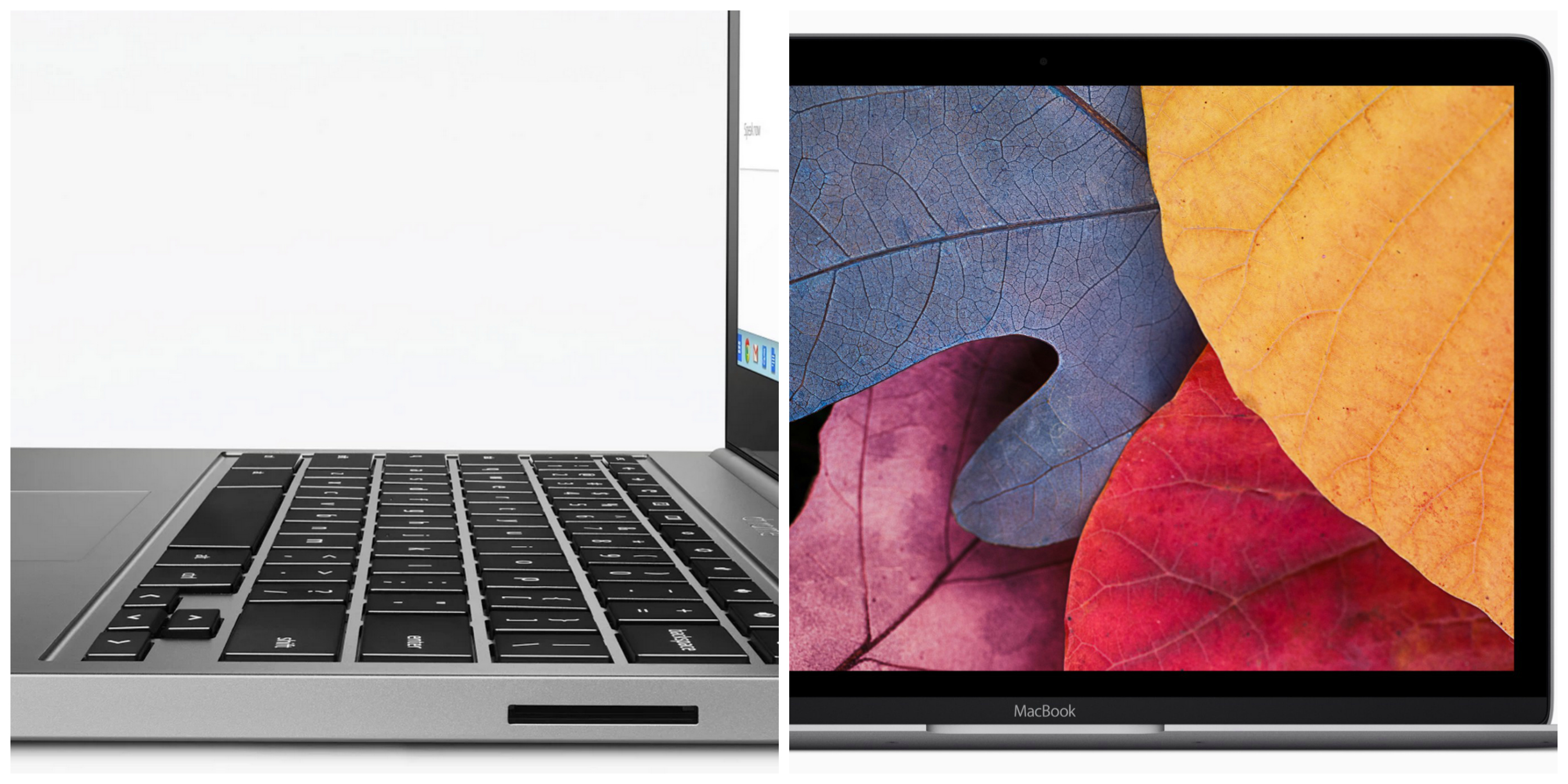 Audience
Based on specs and real-world usage scenarios, both computers are limited in different ways and their target buyers are quite unlike. Stated differently: Both notebooks are for niche markets.

Google indicates that Pixel is a platform development machine that also can be a workhorse for anyone living a connected-lifestyle in the browser. People wanting to access legacy apps are most likely to be less satisfied with the Chromebook. The computer is a powerhouse, as specs reveal, but Chrome OS and the need for Internet access should concern many potential buyers.

On the other hand, the new MacBook is capable of running most desktop OS X applications, with a catch. While there is RAM aplenty, the 1.1GHz or 1.2GHz Intel Core M processors are not desktop-class. The laptop is more like a tablet with attached keyboard without touchscreen. Apple makes considerable performance trade-offs to deliver smaller size and lighter weight. Developers, gamers, and power users should look to laptops running Intel “i” processors.

Microprocessors
That’s good transition then to how much oomph these laptops deliver. As stated above, the new MacBook uses Intel’s low-voltage, low-power-consumption dual-core M chips. By contrast, the new Chromebook comes with either 5th-generation Core i5 or i7 processor, running at 2.2GHz or 2.4GHz, respectively. By that measure the Google machine enters a whole other class that the Apple laptop can’t match.

Graphics Chips
Intel HD Graphics 5300 in the MacBook and 5500 in the Pixel. 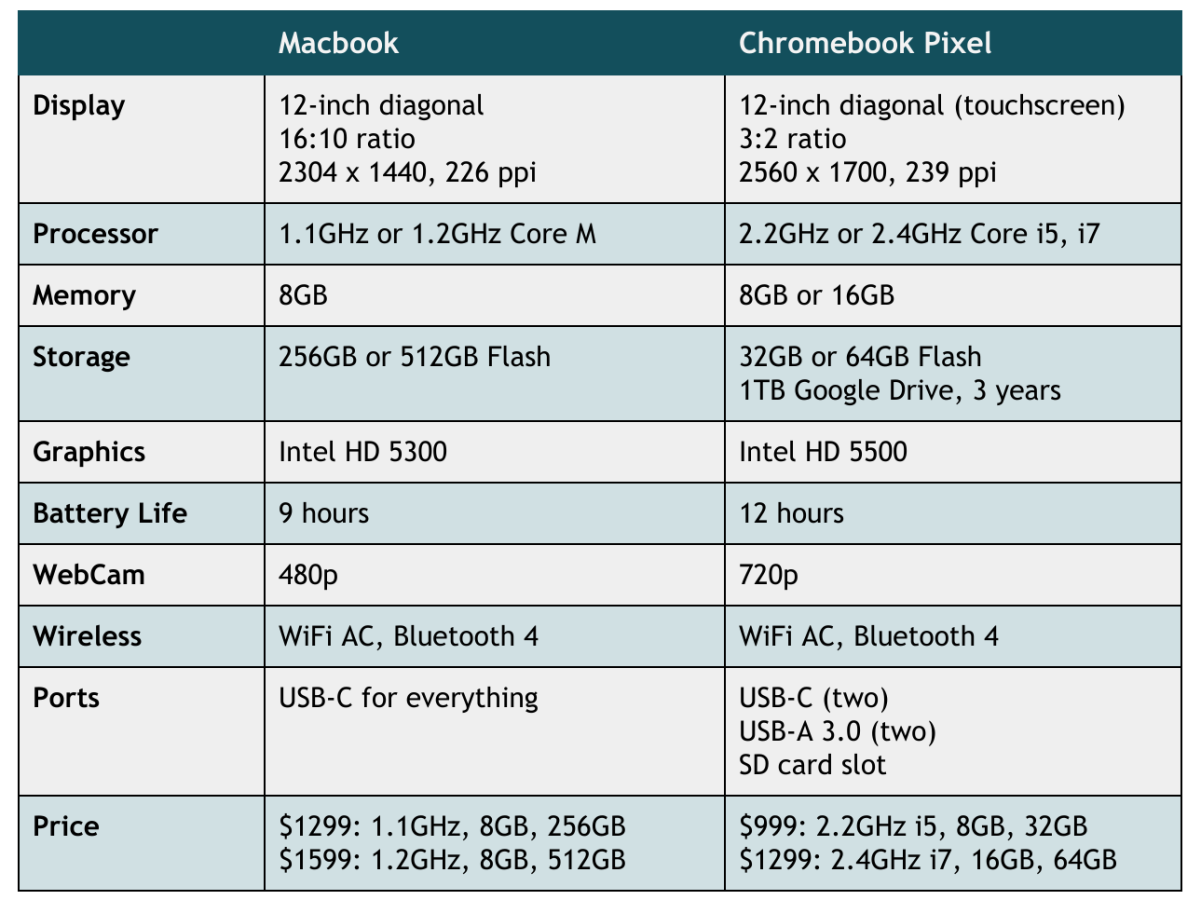 Displays
Panels on both measure about 12 inches diagonally, but a foot for one isn’t like the other, because of screen ratios. The Mac is 16:10, making it more rectangular, while the 3:2 Pixel is more squarish. As such, the Google laptop screen is roomier and better adapted for scrolling webpages, which is sensible considering the browser motif. The Apple computer’s display is wider, which is better for apps—particularly working in several side by side.

Two distinctions that could matter to some buyers: Chromebook Pixel packs a touchscreen, and it is quite bright: 400 nits. For MacBook, Apple re-engineered the touchpad, which, obviously, offers quite different usage scenarios than a touchscreen. At this writing, I can’t confirm brightness, but if comparable to MacBook Pro with Retina Display then about 300 nits, or dimmer than the Pixel.

Battery Life
Apple asserts about 9 hours web browsing. Google says 12 hours. The fruit-logo company’s claims can’t be assessed until there are, at the least, professional reviews. They’re out yesterday for the Pixel, and 11 hours real world looks like the consensus. Pixel also features fast-charging, which jacks up the battery life by 2 hours when plugged in for just 15 minutes.

Memory and Storage
Both laptops are available in two configurations. The 1.1GHz MacBook comes with 8GB RAM and 256GB SSD for $1,299, while the $1,599-priced 1.2GHz model keeps same memory but doubles storage. The i5 Pixel also has 8 gigs of memory but just 32GB SSD, while the i7 laptop doubles both. The Chromebooks sell for $999 and $1,299, respectively.

The high-end Pixel provides a whole lot of memory for the price—compared to just about any other laptop, not just the MacBook, in the cost class.

Storage lacks, which is deliberate. The Apple machine is meant to run applications and manage much of the content locally; storage aplenty is necessary. By contrast, Chrome OS presents the browser as main motif, running webapps connected to remote servers. Google expects users to store content in the cloud, particularly on Drive. As such, Pixel comes with 1 terabyte of free Google Drive storage, which must be redeemed within the first 180 days after log-in setup.

Keyboards and Touchpads
Apple re-engineered both to accommodate the enclosure’s ultra-thin design. The keys are shallow—snugger to the chassis surface, compared to other laptops. As such, the keys use a different spring mechanism that is wider than the traditional one. Meanwhile, the new trackpad is more pressure sensitive but without movement. By contrast, the Pixel packs the more typical island-style keyboard with glass trackpad. Both keyboards are backlit, with the Pixel lights up in response to fingers’ proximity.

Ports
The approaches here couldn’t be more different, or controversial. The MacBook provides a single USB-C port, which means users must buy dongles for additional devices, which can’t connect when the laptop is charging. That’s a compromise for thinness and lightness. Some users will want this benefit over connectedness; others will croon complaints.

Pixel provides ports aplenty. There are two USB-C, so you can charge on either side or connect to power and another device. Meanwhile, there are two Type-A USB 3.0 and SD card reader. But expandability makes Pixel chunkier and heavier than the MacBook.