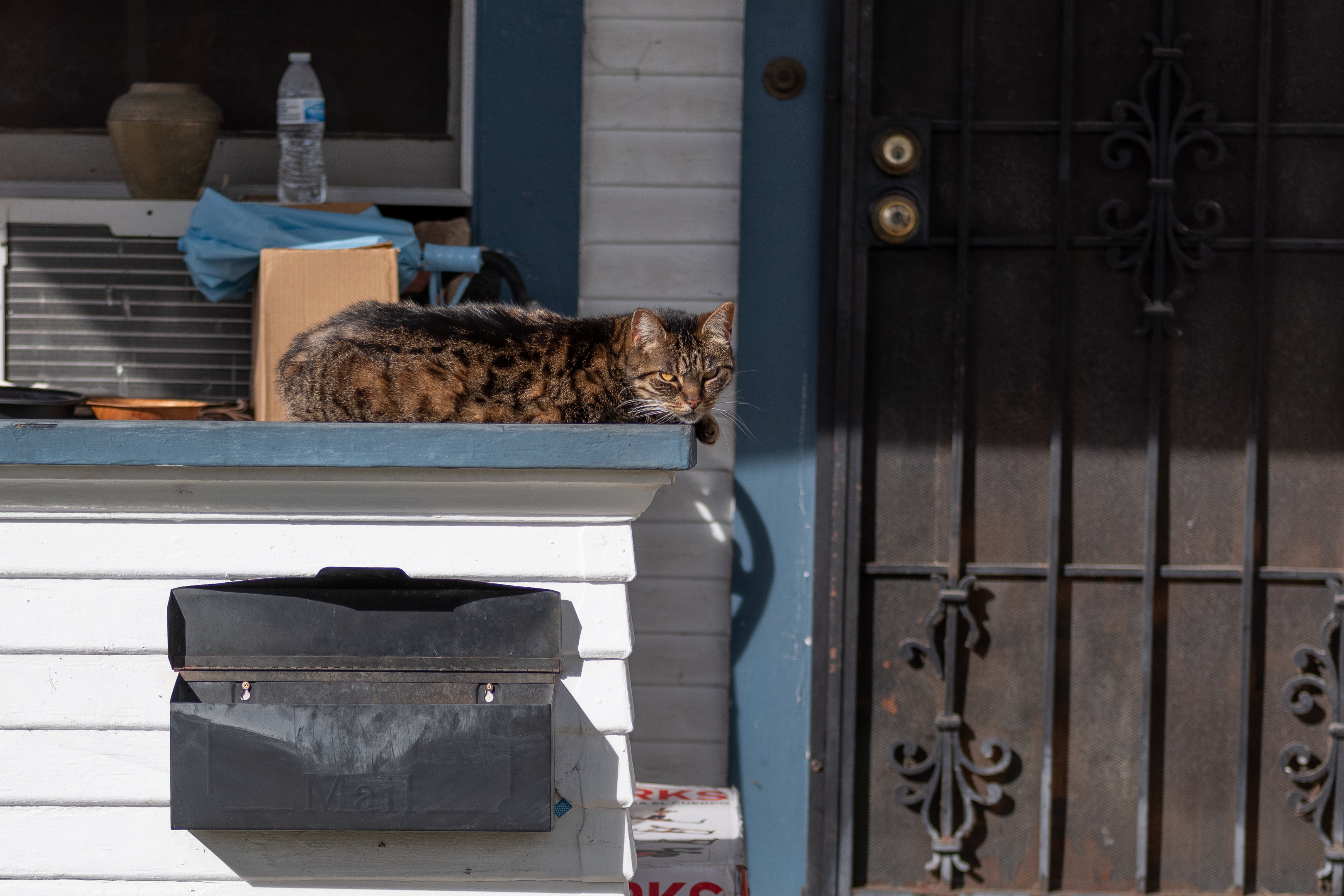 In October 2018, I quit Nextdoor. But this week, I reactivated my account to participate in the ongoing discussion about the two animals. Debate has been fierce, particularly ethics, such as the cats’ abandonment or capture and release. Following the morning chat with neighbors, I commented on the realtor’s post that asked for assistance trapping or rehoming the cats, expressing concern about their future if removed.

“I am working directly with someone at the Rescue House, and if they are deemed not adoptable, they will not be put down”, she answered. “Feel free to have anyone call me and I can explain…I understand their concerns and these cats will not be euthanized”.

Couple hours later, when I walked by, two cage traps could be seen on the porch, where the cats are used to being fed. I happened by later and saw Lupe part-way inside one cage eating and soon after sitting outside grooming. Concerned, I kept close watch and just happened to see the cage door close behind her. I phoned the agent, who came by about 30 minutes later.

The tabby was upset to say the least, bellowing harrowing howls. Repeatedly. I helped the agent finish up a temporary space for Lupe—in an empty bedroom where food, water, and litter box waited. I set up a folding table under a window, and we pulled down the curtain so that she could look out. Then I covered the table with the cloth and blanket to create a dark, safe place to hide beneath. I got the cage open and eventually tipped her out. She ran to the closed window and jumped onto the sill. I carried out the trap, and shut the door.

Leaving her made me feel disheartened. Often on my walks, I would see Laramie and Lupe, who are the last two free-roamers on that particular block. Their across-the-street territorial mates are gone. Monkey passed away a year ago, and Smokey disappeared a few months later.

Lupe’s capture was remarkably easy, because of trust—her loyalty to an owner who abandoned her. She was caged in the same place where, every day for years, the former tenant put out food for her and her companion. You could see Lupe most mornings, on one of the porch railings, basking in the sunlight and waiting for her kibble. Laramie is street-smarter, and more skittish. He will be more cautious, methinks.

The realtor is anxious to move the cats because she expects that the property, which listed for sale three days ago, will go into escrow tomorrow. The house is a 660 square foot ramshackle that will require near-complete renovation to be habitable. The place is an absolute mess. Yet despite its small size and current condition, the house lists for $525,000 because of University Heights location and zoned double-size lot. Offers are already in and expected to be accepted. I hope the place goes to a real home owner rather than an all-cash investor. Whichever isn’t as important as when; the agent told me that, as someone who loves animals, she won’t risk the cats being endangered by being left behind and to the fate of the soon-to-be future owner(s). She also wants them to be checked out by a veterinarian.

I shot the Featured Image, using Fujifilm GFX 50R and Fujinon GF63mmF2.8 R WR lens (f/2.8, ISO 100, 1/1500 sec, 63mm; 9:18 a.m. PST), on Feb. 16, 2019, which was supposed to be Lupe’s last day. But the next morning, before driving off to another state, the former tenant found her too difficult to put into the cat carrier. So she stayed behind with Laramie. Now her last day has truly come. Lupe is an Alabama Street roamer no more. Rescue House volunteers will soon whisk her from the bedroom prison and carry her off in a smaller one; it’s any guess how long she will be caged.

The least I could do was make sure she had a window to look out and place to feel safe. It’s much less than Lupe deserves.

Update March 4: Laramie was snagged overnight, and he was more easily trapped than I expected. Trust. He was caught where food would normally be placed. The agent reported the news on Nextdoor this morning.

Update March 5: The agent says that Lupe accepts pats, and both cats use the litter box. If Laramie warms up to human interaction, likelihood increases that the rescue group will find a home for them. Oh, and the house is in escrow.

Update March 7: Today and yesterday, my wife and I visited the cats, gave them fresh food and water, and cleaned their litter box (and bedroom where they are kept). Last night, a Rescue House volunteer visited them. I asked the agent about the volunteer’s reaction to Laramie and Lupe: “She thinks they’re lovely and they just need time to decompress”. Their next destination will be a foster home.

Update March 10: Days between, Anne and I continued to monitor the cats, change their litter, and put out fresh food and water. Late-afternoon, the primary volunteer from Rescue House came for Laramie and Lupe. She mainly, with my assistance, put each cat in a carrier—and the agent took them to a fosterer in Pacific Beach.

The host lady’s beloved kitty recently passed away, and she has no other. So Laramie and Lupe will go to where they can stay together, without any territorial spats with other beasties. Who knows, maybe the home will be permanent. Whether or not, the RH volunteer assured me that they would be adopted together. And so their last day became a last week, ending up better than where they were (gulp, I hope).

Update June 14: I periodically check the Rescue House adoption page, hoping that neither cat is listed (because their foster place became their permanent home). Both are listed, encouraging they are adopted together.

Update Feb. 10, 2020: For nearly a year, I have checked to see if the cats had been adopted. They continued to be listed, available together only, until a few weeks ago. Then they vanished from the Rescue House site. Eight days ago, I emailed Rescue House asking about them. Today came wonderful response: “Hi! Yes, they are adopted! Wooo Hoooo!”