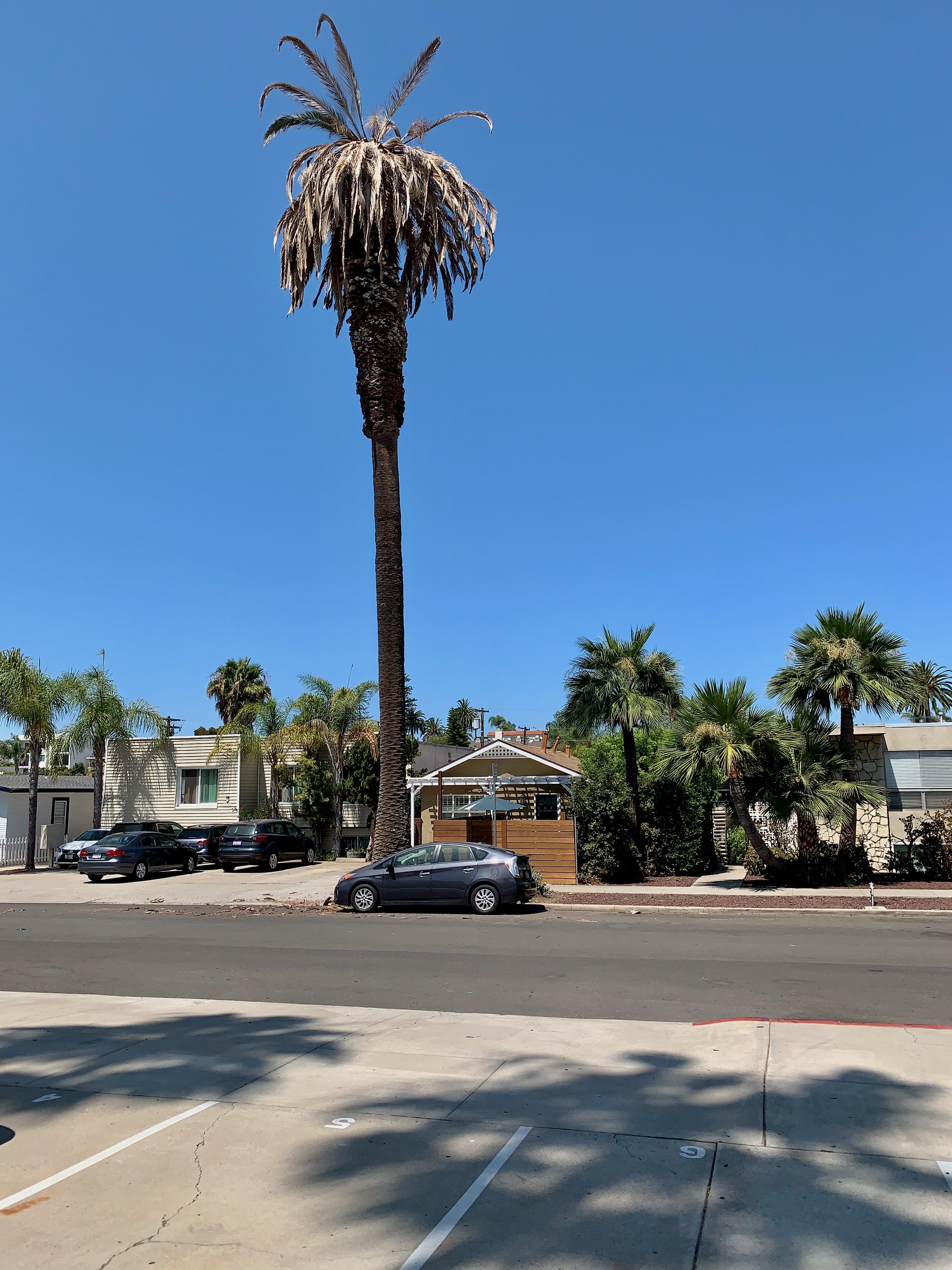 The majestic palm infested with South American Palm Weevils did not come down today as planned. Tree cutters arrived around 7 a.m. PDT—four vehicles, which included lift and shredder. But the workers met an obstacle—a lone car curbed below the palm and smack beneath the sign warning: “No Parking, Tree Removal, 7-19-21, 7 a.m. to 5 p.m.” Two hours later, with no one come to move the auto and tow-truck unavailable, the frustrated tree-cutter chief abandoned the project for another. He told me that his crew couldn’t return any sooner than Wednesday (July 21), because of other commitments.

Unexpected: As I approached, a woman appeared from one of the houses and opened the car door. I flagged her down and explained that she was lucky not to have been towed. Surprising first response, and revealing: “Oh, the date on the sign changed”, attached to the tree above her vehicle—like the previous one. Her reaction tells me that she must have known not to park, particularly beneath the tree. She was apologetic, and explained that she had been working long hours, got home late, and slept in on our her day off. She thanked me, thinking that I had intervened, petitioning not to tow. I hadn’t and politely explained so.

While the palm remains for a few more days, the wildlife does not. Birds flew all about the tree as recently as July 15—maybe even the next day, when the cutter crew chief posted the “No Parking” signs for the 19th. But something changed, and I wonder if in preparation for removal special scent or chemical was applied to discourage birds and ground animals like squirrels. What I know: Gone is the chirping of little birds and squawking of crows; none can be seen fluttered about our parking lot or up into the palm; all but one squirrel disappeared, and it keeps clear of the tree.

I look across the street and see the equivalent of a living thing on life support. The body remains, but the essence is gone. With wildlife’s sudden departure and risk that weevils could infect two other palms of the same species—located at opposite ends of the block—my mood has changed: I would rather the euthanasia had been executed as planned. Greatness gone, the mighty palm still towers magnificently but no longer living space and refuge. Sigh.