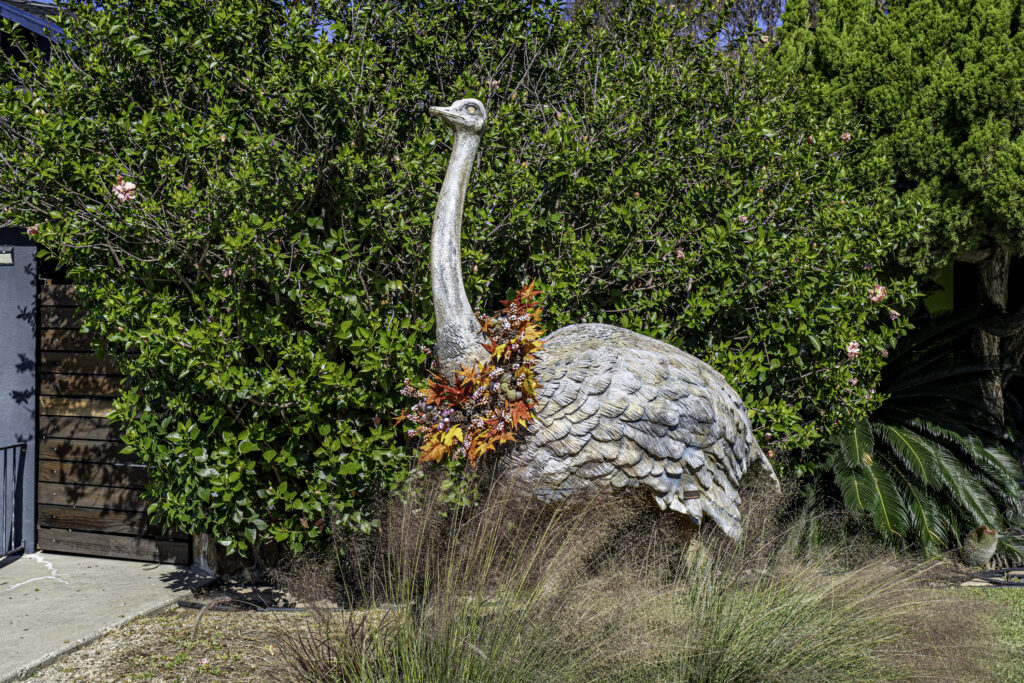 Around the turn of the last century, Bentley Ostrich Farm relocated to my neighborhood but closed in 1929. The feathers were less in demand as a luxury, and economic crisis began its grip on the nation. Many, but by no means all, of the birds were relocated to San Diego Zoo.

One of the fixtures—or monuments to the past—is this ornamental ostrich located outside a home on Mission Cliff Drive. I walked over there today after seeing a sign that Cupcake—one of the “Cats of University Heights“—disappeared on Nov. 8, 2022. Coyote sightings are way up, and the Norwegian Forest Cat’s owners live nearby along one of the canyons. I hope that Cupcake simply is trapped somewhere.

The Featured Image, captured using Leica Q2, isn’t composed as I would prefer. But compromise was necessary to remove distracting elements, which include a parked car and portions of the house. Vitals, aperture manually set: f/5.6, ISO 100, 1/320 sec, 28mm; 12:54 p.m. PST.

The autumn wreath wrapped around the neck is what drew my attention, thinking that this is one large bird that needn’t worry as Thanksgiving approaches. But he shouldn’t gloat about turkeys slaughtered for the holiday feast. Surely somewhere demand remains for ostrich features.

The post’s title, which also could metaphorically apply to our politically-divided nation, derives from the English proverb.