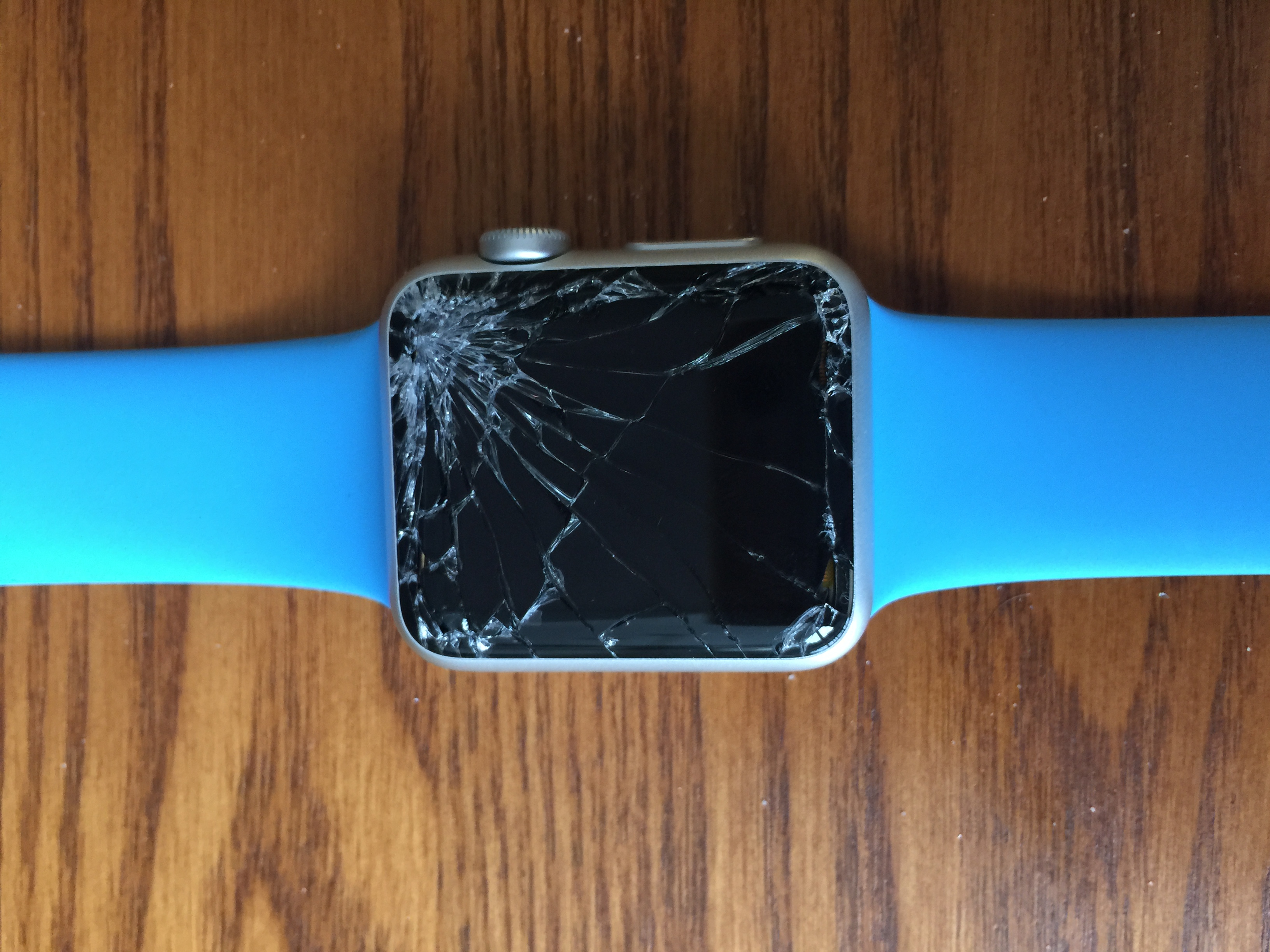 Saturday afternoon, new Apple Watch owner Ken Lecomte posted a frightening photo to Google+: His device with shattered screen. The spider-spray pattern is eerily familiar—one seen so many times—like an iPhone clumsily dropped to floor or pavement. The fruit-logo company boasts about the gadget being a wrist computer, but should it be as easily breakable as the other that customers carry?

I contacted him yesterday, and he shared his story, providing photos that also authenticate him as the watch’s owner. The problem with Ken’s story isn’t truthfulness but lies spun around it. Fanboyism is a cancer that spreads across any tale like his. Already, accusers flame his original post and others resharing it. Apple defenders are venomous. “I’ve been amazed with the amount of negativity”, he says. “It seems a lot of people just can’t believe that Apple could make a product that could break or have a design problem”.

Meanwhile, Apple critics call for label strapgate; there have been too many “gates” already. We don’t need another caustic moniker. In this toxic climate, legitimately aggrieved customers cannot easily step forward. The focus should be the device and whether there is a design flaw or owner error.

Cautionary Tale
Ken preordered two Apple Watches, his and hers, just after Midnight PDT (3 a.m., for him) the day preorders started—April 10. Like many other buyers, he owns iPhones and Macs and looked enthusiastically to receiving the smartwatches—42mm Sport for himself and 38mm for his wife. “Mine is still on backorder”, he says. “Hers came first, so she told me to use it until mine got here. She knew I would be pouting until mine arrived otherwise”. The watches cost $349 each.

“I had the watch less than 24 hours, so I was still familiarizing myself with it”, he says, when the “incident happened on my first venture from my home with the watch”. From the start, he struggled with the watchband, which he claims “is difficult to put on and attach. There is no buckle”. A post sticks through the watchband, “and you have to push a hole over the post and have it securely fastened. Then you have to tuck the tail of the band into a slot in the band. Just go to an Apple Store and watch people trying to put it on for the first time” and “see some frustration”.

For the Sport watchband to be most secure on the wrist, the tail tucks beneath. The design isn’t typical, where the end stays on top of the strap held down by a loop. Ken has two Apple Watch bands. With the larger one, the strap end is too long to comfortably tuck. So he uses the shorter, which, on his wrist, pushes the post into one of the last two holes. 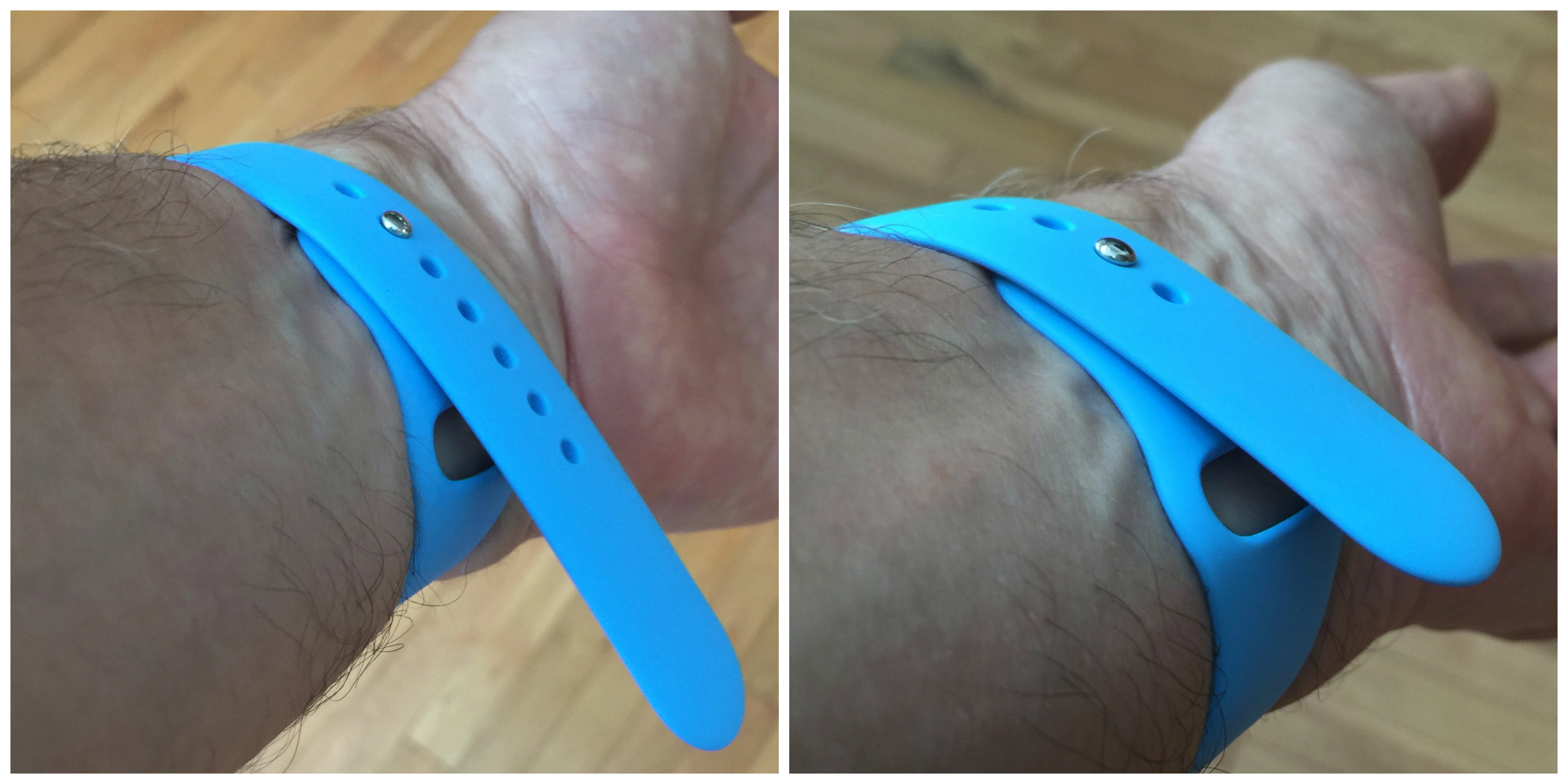 “With hindsight being 20/20. I realize that was my undoing”, he says. “If the tail comes out, it’s easy for it to catch on your clothes when you’re using your pockets. I think that’s what happened to me”. While leaving the local hardware store, “I pulled my keys out of my front pants pocket—the watch fell off my wrist and hit the floor. I’m guessing the tail had pulled out of the watchband and got caught on my belt on the way out”.

Ken “hadn’t been wearing it long enough to see that the tail might possibly pull out during normal use”. He emphasizes: “My complaint with Apple is the strap is not long enough to allow you to use the last two holes in the strap and still have sufficient tail to secure it in the slot. If it is not safe to the last two holes, they shouldn’t be there”. Referring to the two side-by-side photos: “As you can see, the tail is too short on the short band”. With the other there is “too much tail”.

Is the complaint fair, though? I called several Apple Stores asking about how best to secure the bands, and each specialist recommended making an appointment to try on the timepieces. There are three band sizes for the Modern Buckle type or two for standard Sport. Choosing the right one is a major reason for the fitting. Looked at that way, responsibility for properly securing the band falls on the owner. However, if the mechanism is unusual, and the fittings seek to overcome the idea that “you’re wearing it wrong”, blame belongs more to the design.

From Shock to Disbelief
Fanboy-rallying on both sides of the incident starts from a simple emotion: Disbelief. How could a watch so easily come free from the wrist and, more significantly, suffer so much damage from a fall? Ken shares their feeling, particularly as a long-time customer. “Apple and I go way back”, he says. “My first computer was an Apple II+ back in 1978”. However, for business purposes, he stopped using the company’s products  “when the Mac came out” but resumed last decade with purchase of an iPod.

“That’s when the halo effect kicked in”, he says. He missed out on the first iPhones, being a Verizon subscriber. “By the time the 3GS came out, I couldn’t stand being without it any longer, so I switched to AT&T and bought phones for myself, my wife, and two of my employees. I’ve purchased multiples of every phone Apple has made since then, and I’m currently using a 6 Plus. I currently have three iPads—the original, the third-generation, and the Air 2. I also have a Mac Mini, a MacBook Air, and an Apple TV, latest generation”. 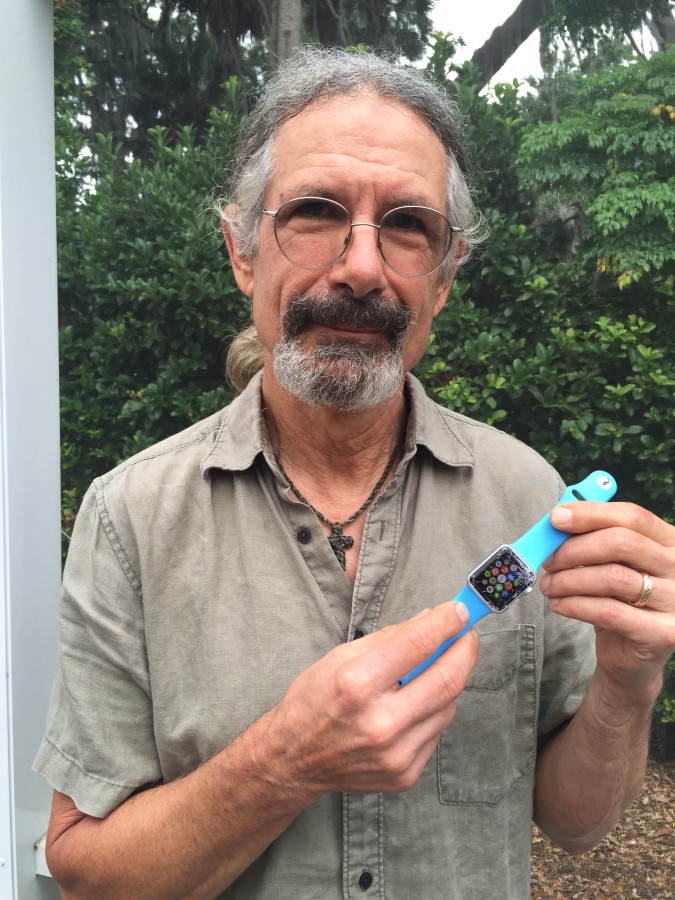 As a long-time Apple adopter and also small business owner, Ken understands customer care, which he expected for his troubles. He made a Genius Bar appointment at the local Apple Store, in Orlando, Florida. There he learned that “breakage wasn’t covered under warranty and the charge would be $229”. I contacted several Apple Stores today, confirming that a shattered screen is considered to be an “out-of-warranty” repair for all models and that the fee for Sport is indeed $229.

Ken asked to speak with a manager, who “offered me no satisfaction either”. Besides the privilege of paying for the repair, the watch would need to be picked up at the local Apple Store—a two-hour roundtrip drive. He tried another approach, later telephoning the company’s support service “to see if they would do any better”. While on the phone, he emailed a photo of the watch. The support specialist “reiterated that breakage was not covered under warranty”. Apple offered to send a shipping box, with turnaround time of about 10 days. “Now the price was $257”, he sighs.

Ken “didn’t buy AppleCare+“, which for an additional $49 would have assured cheaper replacement—another $69. “I don’t have it on any of my other products either. I prefer the self-insure. For the most part this has worked out fine”. Not in this instance. He would still be out $118 total but could have walked out of Apple Store with a replacement device for considerably less than either $229 or $257.

The question is this: Who is to blame? If Ken was careless, Apple shouldn’t be obliged to pay for his mistake. On the other hand, should a watch screen so easily shatter when dropped, regardless of whether band design or owner error is to blame? I’ve worn watches since age 10 and have dropped many. Never once has the glass cracked or shattered.

The same day, Consumer Reports released its more scientific test of Apple Watch screen durability. The Sport model isn’t as tempered as either the more costly standard or Edition models, which use sapphire crystal. Still, Sport survived quite well.

Nevertheless, in retelling Ken’s story and doing supporting research, a question nags me: Is the lower-quality screen and standard band Sport’s undoing? If the strap end doesn’t secure beneath the band, the post pops out, and the watch falls off the wrist, what then? Is that a design flaw or does blame belong to the watch wearer?