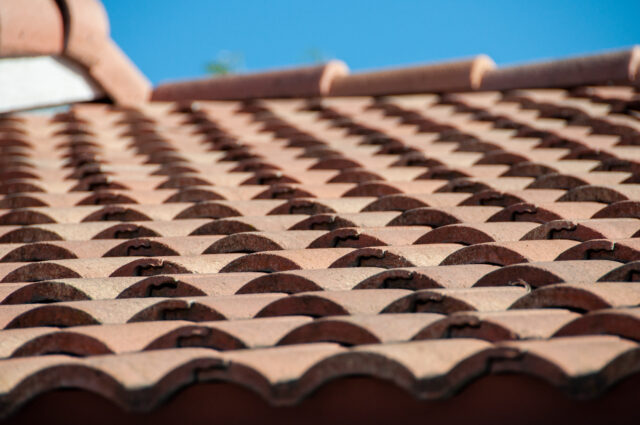 Reviewing older photos, I decided to give the Featured Image another chance—pulling it from the reject pile, so to speak. I used Nikon D90 and 18-200mm f/3.5-5.6 G ED-IF AF-S VR DX Zoom-Nikkor lens to […] 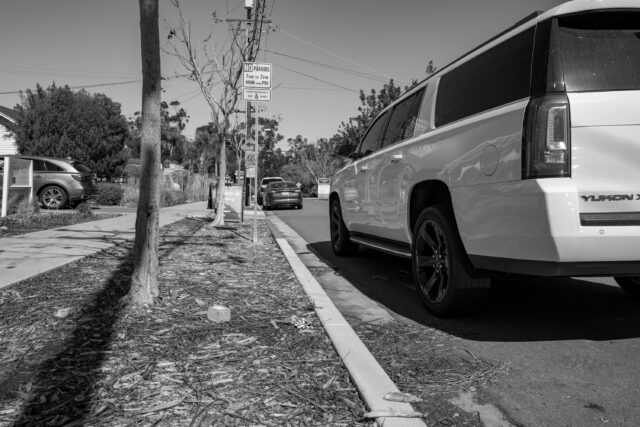 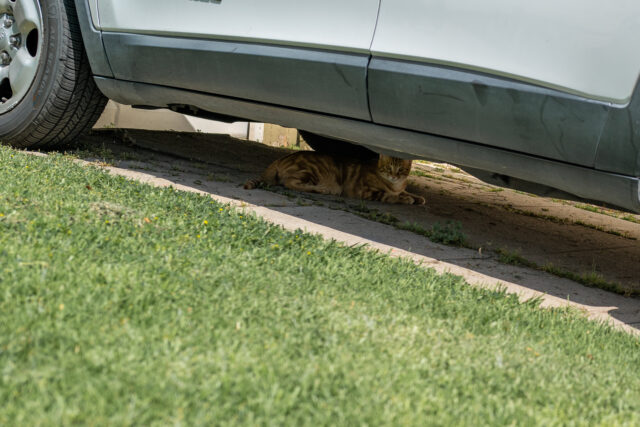 On April 17, 2021, as my wife and I walked westward along Meade, approaching North, an orange tabby moved up the steps and onto the porch of the property where lives Captain Blackbeard. The cat door that lets Blackie come and go responds to his microchip. The interloper could make no unwanted entrance. As we drew near, the kitty, earning nickname Tango, skirted under a parked car in the driveway—where I captured the Featured Image using Leica Q2. Vitals, aperture manually set: f/2.8, ISO 100, 1/2500 sec, 28mm; 10:51 a.m. PDT.

Among the edits, done in Adobe Photoshop Lightroom Classic, I reduced the intensity of green in the grass, which otherwise distracted from Tango rather than color-complemented his fur coat. 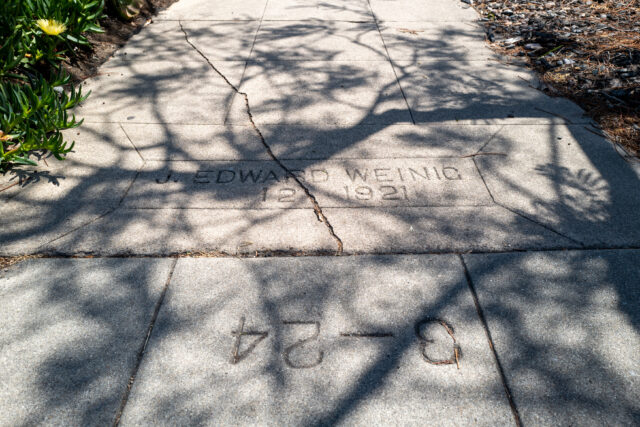 I am the last person to know anything meaningful about construction—particularly the cement and/or concrete traipsed upon everyday. While I walked along Hamilton Street, between Madison and Monroe, in San Diego’s North Park neighborhood, a year etched in the sidewalk stopped my motion. Could that rectangle of pavement really have been placed in December 1921? Think about the century of feet pounding by.

As I stepped back, a gentleman and his basset hound came out of a residence. We spoke briefly, with my question asked, and he expressed how the neighborhood came to be over a series of waves, so to speak. He is correct. 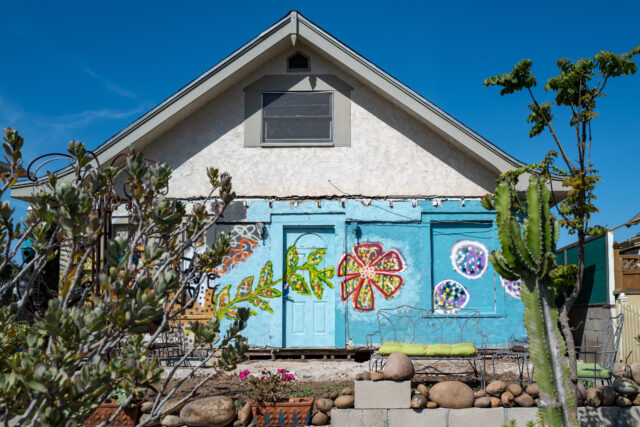 I don’t know what to make of this decorative derelict—or seemingly so seen from the front (looks like the alley-facing portion of the property might be inhabited). I shot the Featured Image, using Leica Q2, […] 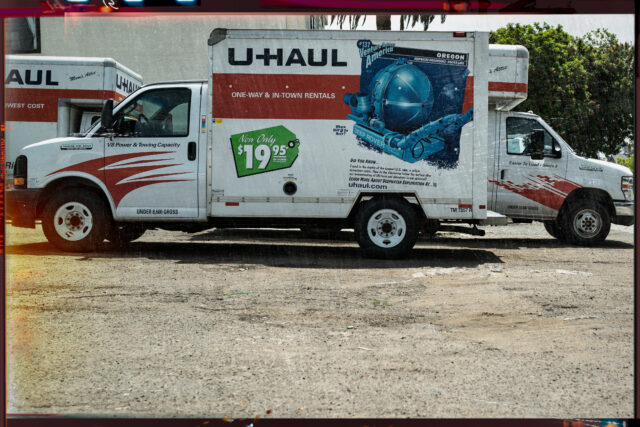 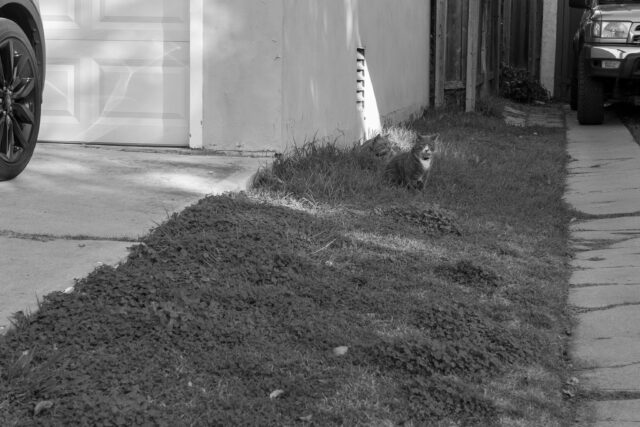 Louisiana Street frenemies Ash and Nelson hang out on Jan. 9, 2021. I regretted carrying along Leica Q2 Monochrom, because their portrait would have been so much better in color. Nelson’s orange fur really pops […] 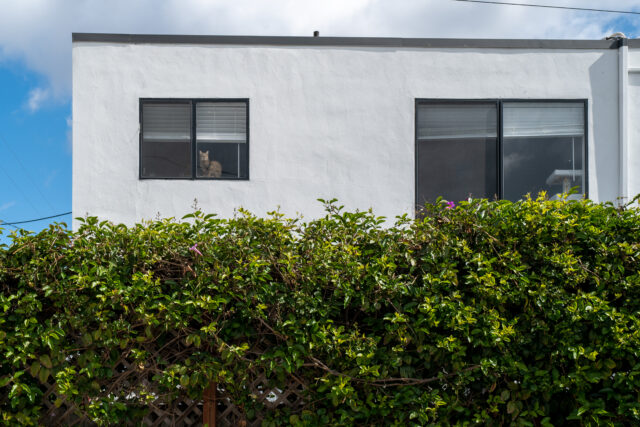 For about two months, I have watched for a feline to appear in a second-floor cat tree. Among the handful of sightings, glass glare from the morning sun made any meaningful portrait majorly difficult to capture. What luck! On April 27, 2021, the beastie materialized in a different window, which also was free from obstruction below. For fixed, rapt gaze, and proud posture, the orange tiger-stripe earns nickname Majestic. 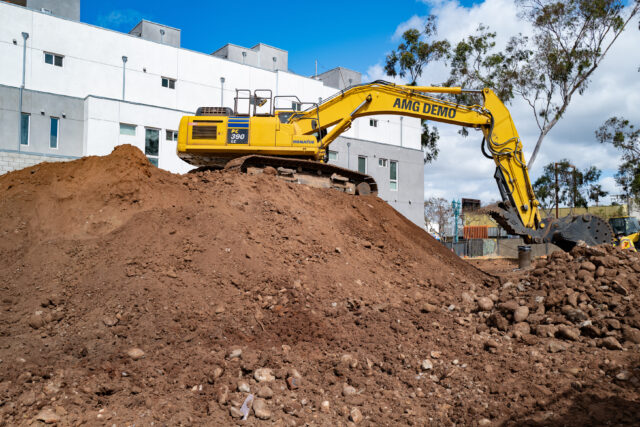 The big digger seen at the corner of El Cajon and Mississippi on April 12, 2021 triumphs atop a mountain of dirt upon which once stood three buildings; in San Diego’s University Heights neighborhood. Someday soon, another cathedral of unaffordable housing will rise like the Tower of Babel.

My prediction: Cities all over the country are currently overbuilding to accommodate the massive Millennial population from which fewer babies are being born. Fast forward a decade, perhaps just five years, and rising Baby Boomer deaths coupled with falling birth rates will lead to a glut in housing—particularly multi-family properties. Is this construction site one of many future ghettos? 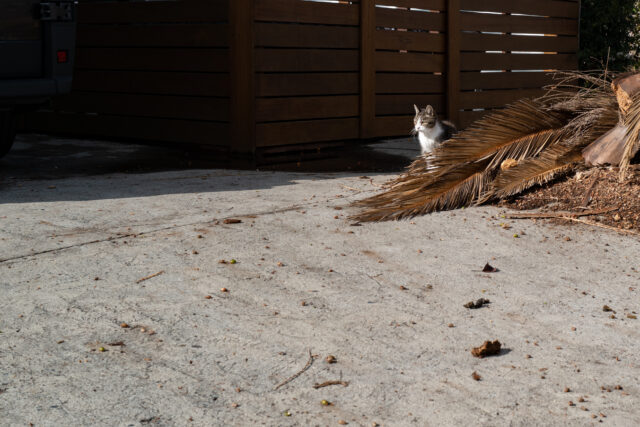 Aged Annie joins the series as the 400th profile since number one on Oct. 17, 2016. I first photographed her on Oct. 7, 2020, but the Featured Image is from Jan. 24, 2021—same day that I shot fallen fronds from the slightly-shaved Bearded Tree, which is now gone. I delayed posting her portrait, hoping to also add her housemate, who is let out (and brought inside) earlier in the morning than I typically meander by the property. The other cat also hides from me among the parked cars.

But considering this milestone post, and deciding which kitty to mark it, sweet, slow Annie had to be the one. Both beasts live on Alabama, making her the 64th featured from the street between boundaries Adams and Lincoln. She resides on the same block as Bella, Fuki, Mane, Mitsie, Mustachio, Peanut, Penny, Rocky, and Schroeder. 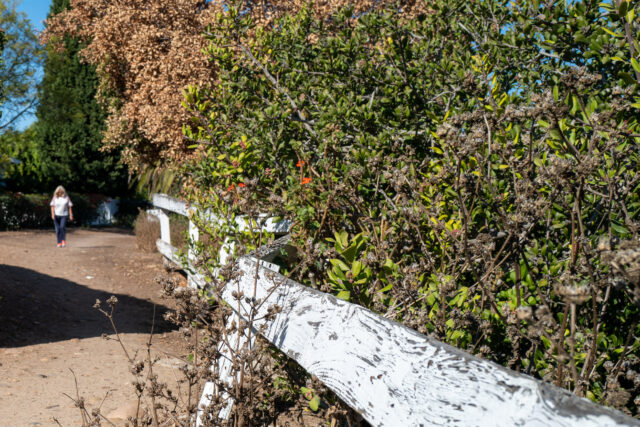 Since shooting the Featured Image on Nov. 11, 2020, I have edited and cropped numerous times, trying to get the right look. Nothing suits me, and I cannot explain reasons for finally publishing other than perhaps good example of failed attempts.

I had hoped the decaying fence, set against shrubs and trees, would produce feeling of being back in another era. Eh, no. The woman’s presence is happenstance, and her contribution to the composition is timeless only because of context: SARS-CoV-2 (severe acute respiratory syndrome Coronavirus 2)/COVID-19 had pretty much everyone wearing masks—nuttily even outdoors. But not this lady, whose uncovered face prevents the moment from being dated. 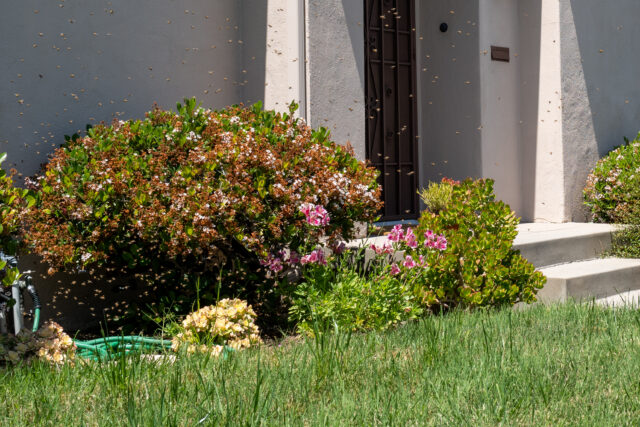 This afternoon, while walking and talking to my sister who lives in Florida, I came across bees buzzing around a front yard along Mississippi between Mission and Monroe here in San Diego’s University Heights neighborhood. I excused myself briefly and shot a short video using iPhone XS.

Strange thing, when finished I observed the insects swarming about the next property. That kind of deflated my working presumption of a disturbed nearby hive. So I snagged another short video, followed by the Featured Image taken using Leica Q2.