Too Many people are making too much about ComScore’s searcher penetration data, which released on August 14. Microsoft and Yahoo executives shouldn’t get their hopes up, nor should analysts, bloggers or journalists writing about the data otherwise be misguided. Similarly, ComScore has overstated Microsoft-Yahoo combined search potential.

It’s no secret that Google is the US search leader, with 65 percent share in June, according to ComScore. Yahoo and Microsoft, respectively, had 19.6 percent and 8.4 percent search share. ComScore wrongly combines the share to get 28 percent (I’ll explain why it’s wrong later).

The ComScore data has the Web all gaga—and this one is no lady—about how MicroHoo search would be in striking distance of Google. But such speculation is a pile of poop. Would people please clean up after their animals? The first and most fundamental mistake is ComScore combining Microsoft-Yahoo search share or searcher penetration, because:

These are all reasons why Google has little, if anything, to fear from a combined Microsoft-Yahoo search—and that’s without fully accounting for the time horizon, perhaps two years, before Microsoft brings something meaningful to market. 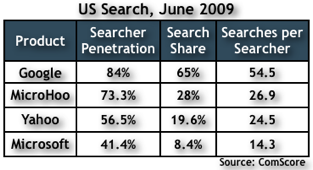 What a Theory
Here’s how the pundits’ and ComScore’s “MicroHoo catching Google theory” works: Combined search share tops 30 percent, while Microsoft improves Bing search so that people want to use it instead of Google; advertisers join the ride.

For some reason, ComScore leaves the dirty work of touting combined search share to Craig Macdonald, Covario Chief marketing officer, who in ComScore’s Friday press release asserted that, separately, Microsoft and Yahoo “are unable to efficiently meet the inventory needs of advertisers which are attainable through Google.” He continued:

The combination of the two platforms, however, gives advertisers the ability to reach about 30 percent of the search market in a more efficient manner—which may drive an increase market share post-integration. A market share of 30 percent also represents a critical threshold that many marketers feel is necessary for them to justify the investment of national marketing dollars in a particular program.

Really now? So, marketers waited until Google had 30 percent share before investing advertising dollars? I don’t think so. Something else revealing: For about two years, starting in 2003, Microsoft and Yahoo had the same search and paid search architectures, which according to legacy ComScore data, put them, combined, ahead of Google. Both companies still fell behind Google in part because the synchronous relationship between search share and advertising is a myth. The platform matters more. Google’s platform has many attributes similar to Windows, in terms of how the ecosystem developed and sustains. Google’s informational platform will be displaced no easier than Windows—and look how many tech companies failed trying.

While they are still looking up at Google in terms of market share, they have a real opportunity to make headway given that nearly three-quarters of all searchers conduct at least one search on these engines every month. The challenge will be to create a search experience compelling enough to convert lighter searchers into regular searchers which is generally easier than converting new users. Though clearly easier said than done, if they were to equalize the number of searches per searcher with Google they would command more than 40 percent market share.

The statistic’s implications shouldn’t be understated, and they are obvious when taking a look at pretty much any other market. There are bazillions of examples where competitors have about the same or near equal penetration, but not equal market success. One: According to Beverage Digest, Coca-Cola Co.’s US market share was 42.7 percent in 2008, compared to 30.8 percent for PepsiCo. The two companies have about equal penetration based on distribution.

Somewhat related, there is another knock against searcher penetration, and it comes from ComScore’s Friday press release:

Loyalty is one of those intangibles not easily disrupted. Do you chose Burger King over McDonalds? Windows PC or Mac? Coke or Pepsi? Coke won the cola wars. According to Beverage Digest, Coke’s marketshare was 17.3 percent in 2008, followed by Pepsi at 10.1 percent and Diet Coke at 10 percent. Combined, the two main Coke beverage have nearly three times Pepsi’s marketshare.

Pepsi has done better gaining drinkers through other beverages, such as my fav: Mountain Dew, which has great taste, smart branding (It’s now Mtn Dew) and outstanding demographic marketing. Regular Dew ranked #4 in US marketshare and Diet Dew, the year-over-year leader in volume growth, ranked #9. Mtn Dew is the original energy drink, decades before any other. But Mtn Dew isn’t Coke. Mtn Dew is a good beverage, but it’s no cola and not successful enough for Pepsi to beat Coke. The point: Market incumbents aren’t easily displaced. Microsoft is the aforementioned example with Windows, but there are others.

At the turn of the century, Internet Explorer commanded well over 90-percent browser usage share. Mozilla set off a new round of competition with the 2004 release of Firefox. Apple and Google later released browsers for Windows. Today, competition is fiercer than during the late-1990s browser wars. Internet Explorer’s eroding usage share is now a monthly headline at many tech blogs or news sites. But it’s slow erosion. According to Net Applications, in July, IE usage share was 67.68 percent down from 79.49 percent in August 2007. Second-ranked Firefox had 22.4 percent usage share, up from 15.45 percent during the same time period. Comparatively, I expect MicroHoo to make share gains no more dramatic than Firefox, without some unforeseen circumstance or force outside Google, Microsoft or Yahoo influence.

Microsoft and Google are engaged in a platform war, of which search is but a part. Search share or searcher penetration are really meaningless if the platform isn’t there. Right now, for Microsoft, it’s not. The utmost important question: From Bing and Yahoo search can Microsoft build a new platform capable of rivaling Google? You tell me.

Do you have a search story that you’d like told? Please email Joe Wilcox: joewilcox at gmail dot com.