News has gone social, claims Pew Internet. LOL, tell me something I don’t know. 🙂 Pew’s report, “Understanding the Participatory News Consumer,” is an informational treasure trove for journalists or would-be journalist bloggers. But it would be much better had Pew surveyed Americans under 18. Instead, the organization surveyed 2,259 US adults, ages 18 or older, between Dec. 28, 2009 and Jan. 19, 2010. Crucial demographic “Internet users” is 1,675. Why did Pew ignore the most important socially active demographic group? Teenagers?

The report officially released today, but I downloaded it last night. Seventy-one percent of adult Americans get news online, which Pew says works out to 94 percent of US Internet users. Whoa. What’s more interesting is how they get their news. Among this group:

Pew looks at what social news means to journalists, not just news organizations: 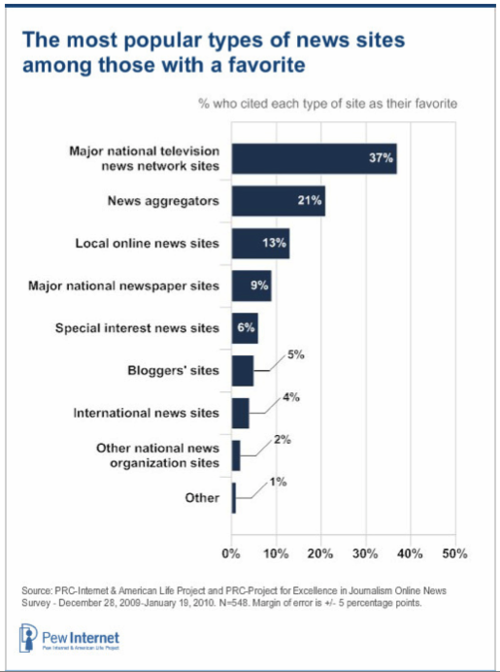 Social sharing is crucial regardless. Nineteen percent of US Internet users use Twitter or other status update services. Pew also found that 99 percent of Twitter users fit in the “online news consumers” classification. More from Pew: “Twenty-eight percent of those who are in the online news consumer cohort say they get Twitter updates about news from friends and colleagues they follow on Twitter and 18 percent follow the Twitter feeds of news organizations or individual journalists. Combined, that amounts to 6 percent of all internet users who get news via Twitter feeds.”

That number doesn’t seem like much, but how hard is it to write a 140-character Tweet? I signed up for Twitter on Dec. 26, 2006 and used it little until mid 2008, when I started massing followers. Twitter is a tool no journalist can ignore.

Ouch, does that hurt! I need to make social sharing a higher priority at this blog. 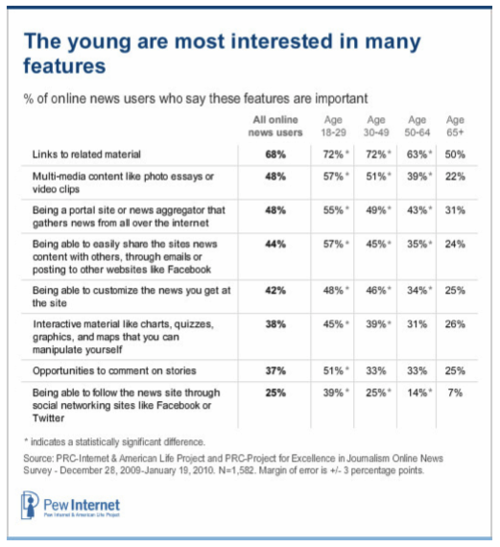 I’ve summarized but just a few pages from the 51-page Pew report. It’s a must-read for any journalist looking to survive dramatic social media changes. They’re still relatively new. YouTube officially opened in November 2005. Facebook opened to the public in 2006 and Twitter a few months later. Most of the most popular or growing popular tools for community and self expression launched within the last three years:Disqus, FriendFeed, tumblr, Twine, Qik and USTREAM, among many others. Apple’s iPhone released in June 2007—yet another social sharing tool now taken for granted (along with a slew of new smartphones).

New social sharing services seemingly appear every day. Google Buzz and Chatroulette are among the most recent. The message from these social sharing changes in context of the Pew report is clear: Journalists must either adapt or die.