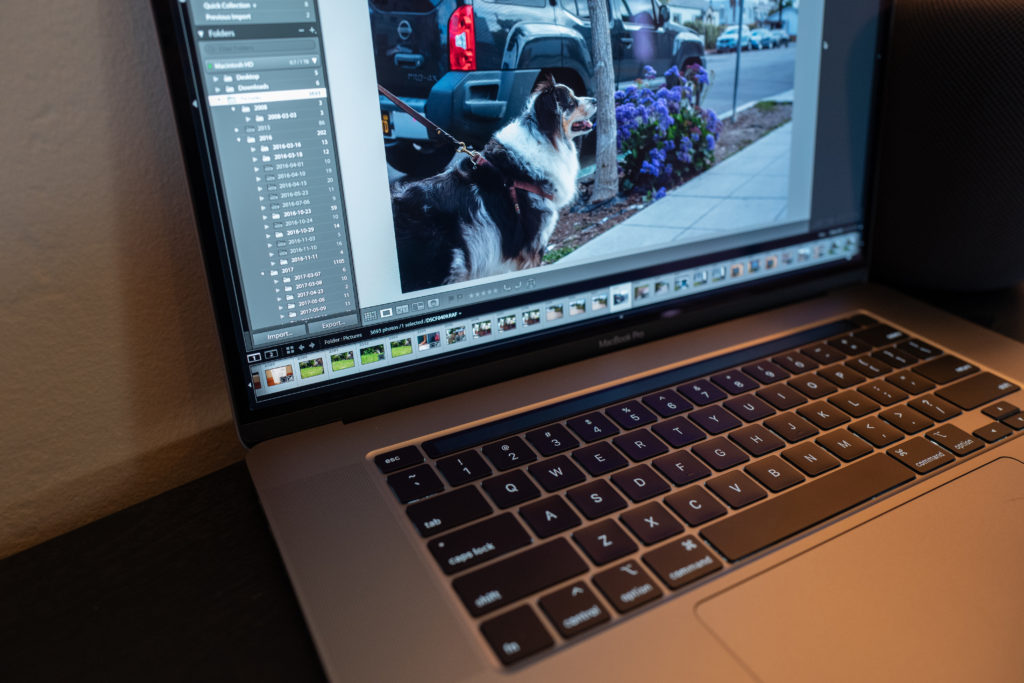 Three years ago today, I purchased the first-generation 15.4-inch MacBook Pro with the much-maligned Butterfly keyboard and Touch Bar. The laptop has been a fine friend, whose time in the Wilcox household soon ends—maybe. I always planned to keep the beast at least through the end of its Apple Care warranty period. But about four months ago, several keys started misbehaving—letters “B”, “C”, and “X” and the spacebar among the offenders. I never imagined how widely used is “B” until it stopped rendering or started repeating. Autocorrect made matters worse, when compounding mistakes with new ones.

I keep my computer fairly clean and figured that the Butterfly’s particle problem wouldn’t affect me. That was true for more than 30 months use. Believing rumors that Apple readied a 16-incher with new keyboard, I hobbled along, waiting for its release rather than taking my MBP in for warranty repair. Backing up data, wiping the disk, and restoring macOS is a pain. Why interrupt my workflow twice? So when the fruit-logo company finally announced the newer model, 14 days ago, I ordered one hours later. The laptop delivered a week ago, but I didn’t complete the switchover until last evening.

The newer MBP is eight cores and the older four—both more than adequate to meet most of my computing activities. The 15.4-incher goes to Apple Store today for Butterfly keyboard repair, and if the design is similar to MBP 13 the battery will be changed, too. Refurbishing doesn’t get much better than those two components. While I lean towards keeping the larger laptop, the decision isn’t final and won’t be until conducting a final side-by-side comparison.

Here’s the thing: I prefer the screen on the older MBP, which looks considerably brighter to me. The two machines are supposed to be 500-nits, but I don’t see it and don’t have means of measuring. Searching online Mac forums, I see that other owners complain about similar comparative dimness. Additionally, the extra weight—4.3 pounds to an even four—and heft pushes past the pleasing threshold. My 2016 vintage laptop feels plenty fast enough and meets most of my needs, as previously stated—and I prefer the subtlety significant design differences.

The other thing: While other users complained about the clickity-clack of the Butterfly keyboard and the firmer feel, I didn’t. The MBP 15’s svelter size, accommodated by the design, supported by reducing the number of port types, was a benefit that I appreciated. The 2019 replacement is chunkier and too much like its forebear from four years ago. But, I must admit to typing considerably faster and more accurately using the updated scissor-switch keyboard. Computing performance is smoother, too, and battery life is supposed to last longer. If display is the dealbreaker, I keep the old and save beaucoup bucks by returning the other. If keyboard is the dealbreaker, I continue with the newer.

Odds are 50-50, at this juncture. The screen dimness bugs me immensely. But faster typing is a big bonus. Both attributes affect my productivity. The sensible choice may be to wait for the next iteration. Time will tell, but not too much longer. The permissible return window on the MBP 16 is 14 days. Should I decide to part with the 15.4-inch notebook, Apple will credit nearly $1,000 for a trade in; selling is another option, although that may be challenging during the sales-frenzied holidays.

Update, 7 p.m.: My MBP 15 is at Apple Store, for what I believe the Genius referred to as top-panel replacement, which includes battery along with the keyboard—and, presumably (because I forgot to ask), Touch Bar, too.

I spent some time with a 16-inch display model, which, coincidentally, sat alongside 12.9-inch iPad Pro. Subjective brightness is comparable to my machine and observably dimmer than the iPad. Difference in brightness was brazenly obvious, in fact. Something I wonder: Display panel on the tablet, and my in-for-repair MBP, is glossier than the one on the newest Apple Pro notebook. Could apparent, subjective brightness have something to do what that?