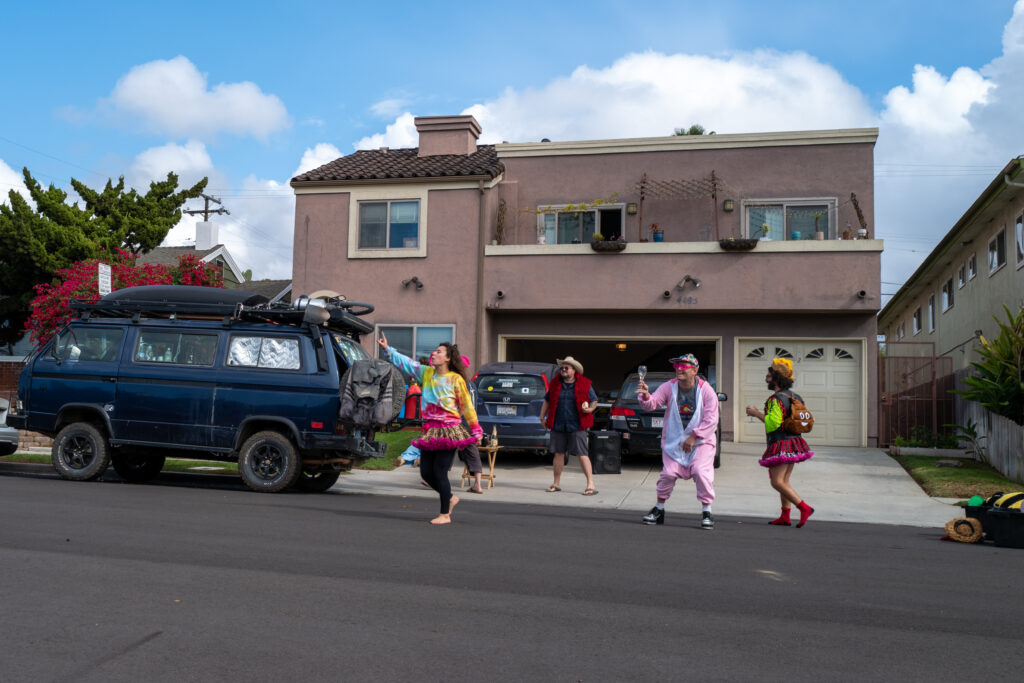 The media has no authority under the Constitution to declare a winner, but doing so invigorated people supporting Biden—but many more, by my observation, who opposed Trump. The Featured Image, from November 7, as news spread about Biden’s news-media-sanctioned victory, shows some of my neighbors dancing to music blasting from a large speaker in their driveway. I captured the street shot from the hip while walking, using Leica Q2. Vitals, aperture manually set: f/8, ISO 100, 1/125 sec, 28mm; 12:33 p.m. PST.

Weeks before the election, I read or heard somewhere that the Biden camp planned to apply lessons learned from the George W. Bush-Al Gore election controversy of 2000. While Gore waged a legal battle to selectively recount votes in Florida, Bush acted like he already had won the war;  he didn’t wait for an outcome, brazenly filling cabinet posts and making policy pronouncements.

Biden planned to act similarly, soon as the media declared him the winner. Thus he became president-elect, even though there is no official title as such and no news media declaration has legal standing. What’s that saying? Possession is nine-tenths of the law. While Trump wrangled with states and the courts about alleged election fraud, Biden assumed aristocratical attire, figuratively speaking. He played President convincingly enough. But, to reiterate, he had no standing whatsoever without Murphy’s blessing from GSA.

She writes about why she waited 20 days after the election:

Contrary to media reports and insinuations, my decision was not made out of fear or favoritism. Instead, I strongly believe that the statute requires that the GSA Administrator ascertain, not impose, the apparent president-elect. Unfortunately, the statute provides no procedures or standards for this process, so I looked to precedent from prior elections involving legal challenges and incomplete counts. GSA does not dictate the outcome of legal disputes and recounts, nor does it determine whether such proceedings are reasonable or justified. These are issues that the Constitution, federal laws, and state laws leave to the election certification process and decisions by courts of competent jurisdiction. I do not think that an agency charged with improving federal procurement and property management should place itself above the constitutionally-based election process. I strongly urge Congress to consider amendments to the Act.

As you know, the GSA Administrator does not pick or certify the winner of a presidential election. Instead, the GSA Administrator’s role under the Act is extremely narrow: to make resources and services available in connection with a presidential transition. As stated, because of recent developments involving legal challenges and certifications of election results, I have determined that you may access the post-election resources and services described in Section 3 of the Act upon request. The actual winner of the presidential election will be determined by the electoral process detailed in the Constitution.

The most obvious trigger for Murphy to act: Concession, which Trump hasn’t given to Biden. That, combined with legal challenges and states not having certified votes, caused dilemma. She also writes, about her decision—and the consequences of waiting:

I was never directly or indirectly pressured by any Executive Branch official—including those who work at the White House or GSA—with regard to the substance or timing of my decision. To be clear, I did not receive any direction to delay my determination. I did, however, receive threats online, by phone, and by mail directed at my safety, my family, my staff, and even my pets in an effort to coerce me into making this determination prematurely. Even in the face of thousands of threats, I always remained committed to upholding the law.

As I walked by my giddy, dancing neighbors 16 days ago, two people moseying some social-distanced meters in front of me yelled: “Is it official?” To which someone answered: “It’s official!” Not by any meaningful legal measure. But today, it’s official: Joe Biden is “apparent president-elect”, according to GSA. Only in a few weeks, when electors cast their votes—and more than 270 are for Biden, as expected—will he be winner of the 2020 Presidential Election.