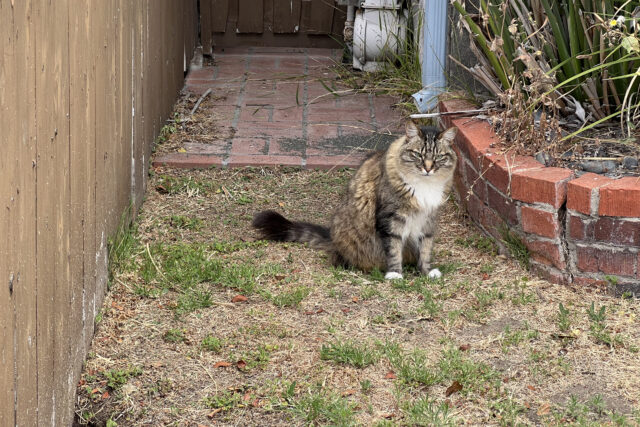 We present another special guest, spotted between Arizona and Hamilton, which is about one-and-half-blocks beyond the neighborhood boundary into North Park. This fine feline calmly crossed Monroe a few meters ahead as my wife and I walked today. My feet carried me across the street, where I used iPhone 13 Pro to capture the Featured Image. Vitals: f/2.8, ISO 32, 1/132 sec, 77mm; 10:11 a.m. PDT.

The eleventh honorary member of the series joins: Buddies, Candy, Chill, Envy, Mona, Moophie, Ninja, Promise, and Sammy, and Tom and Jerry. Darth Mew initially belonged to the group, until later turning up in University Heights. 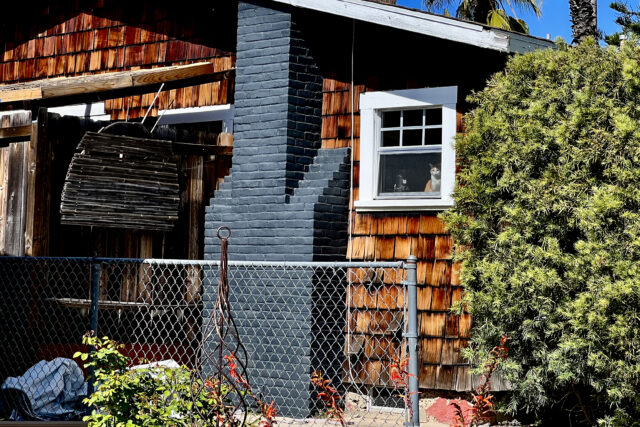 Backlog cleanup continues—reaching behind to Feb. 25, 2022, and the ninetieth profiled putty seen behind glass or screen. I spotted the shorthair while walking along Louisiana Street, then discretely but quickly pulling out iPhone 13 Pro for a single shot. I sometimes worry that puttering about for too long might offend a pet owner, and permanently end a cat’s window wanderings. 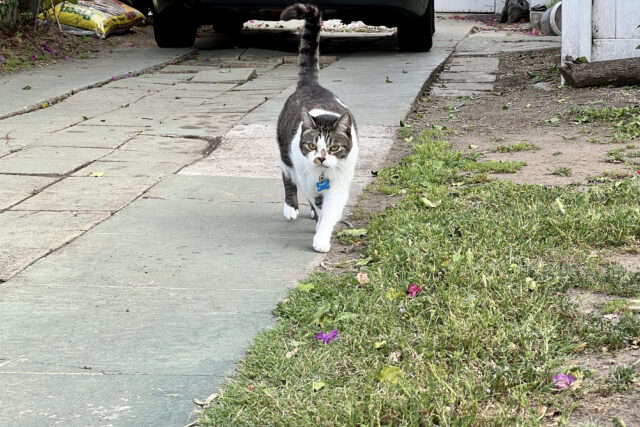 To celebrate yet another Caturday, we are assisted by the stalwart Sharky. I would nickname him Bruiser if not knowing his real identity. He’s a tough-looking beastie—not one to lose a territorial squabble, one could imagine. 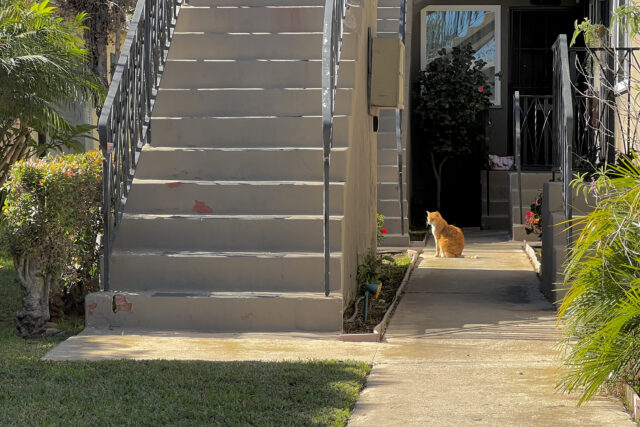 Some single sightings simply must be enough. As I crossed Monroe along Georgia on Feb. 5, 2022, a ginger strutted down the sidewalk and diagonally cut across grass and stopped at a sunny spot near the back stairs of an apartment complex. Two portraits taken using Leica Q2 flopped because the animal had turned away. One of a pair from iPhone 13 Pro has the shorthair showing his face, but even cropped 100 percent reveals little detail. 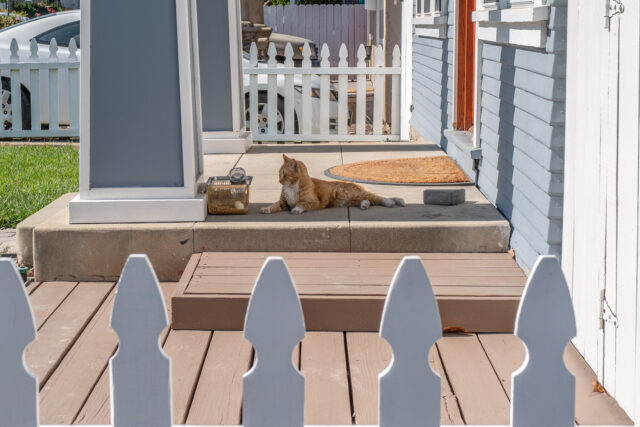 For Friday the Thirteenth, we present a lucky find from yesterday. While walking up Meade Avenue in North Park, just beyond the University Heights boundary at Texas, my wife spotted a skinny kitty dash across the street. Annie eventually found him (or her) hiding under a truck on Arizona. We moved along.

Not long later, I spotted a shorthair slunk low in a porch column’s shadow. Annie expressed concern about the beastie acting fearful. That’s when I exclaimed and pointed to the cat’s companion, which had riveted attention: Mouse in a plastic cage. Oh, how I wonder what is the backstory! 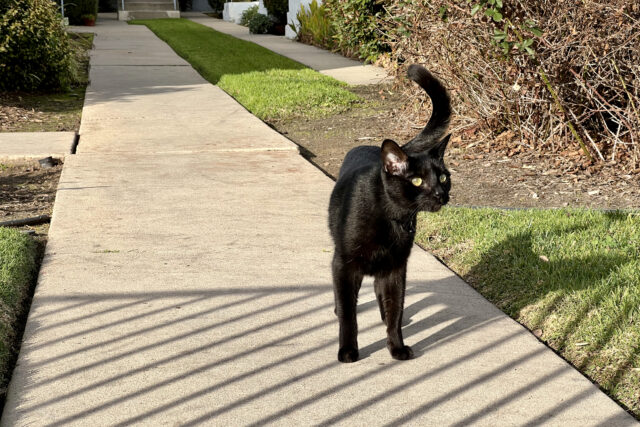 We stay on Louisiana Street, where on the same block you might meet: Cuddles, Honcho, Jingles, Kuro, Regal, Saunter, or Squeaky. All-blacks are often hardest for me to distinguish. This fine feline bears resemblance to Kuro, who was spotted on a nearby property, but without bell collar; so I take a chance that the two are not one and the same.

The beastie backlog remains, but with fewer left to publish. While I have seen this shorthair several times over several months, the documented meeting (and greeting) occurred on Jan. 28, 2022. 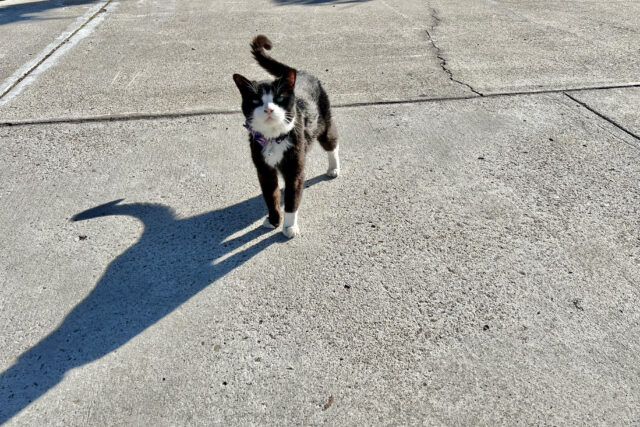 On the same Louisiana block where the Craftsman Bungalows were demolished and where reside Cuddles, Honcho, Kuro, Regal, Saunter, and Squeaky, my wife and I met a Tuxedo whose manner and movement suggest elder cat.

I believe this fine feline is longest-ago photographed but unpublished beastie. Some kitties are more endearing than others, and this one tickled my fancy (yeah, yeah, archaic phrasing) such that I held back posting in hopes of getting a real name. While Annie and I have seen the shorthair since the first sighting on Jan. 23, 2022, we haven’t been lucky enough to encounter an owner. 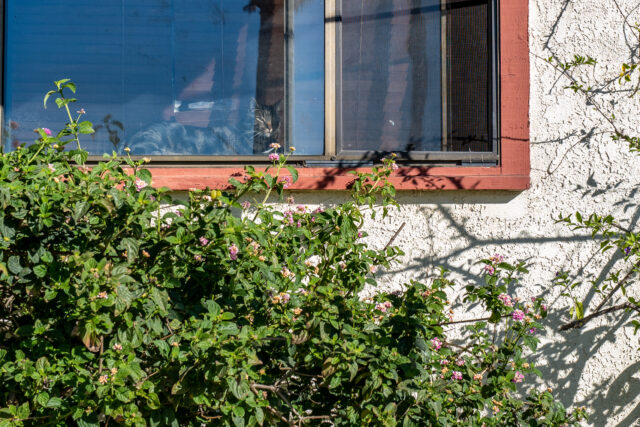 The backlog of unpublished kitties trails by more than four months. The oldest aren’t so much in a queue of many as one of waiting—as I hope to meet owners and obtain real names. Time comes to move along the stragglers, starting with this tabby who is most frustrating; I know his (or her) housemate, Shy, and really wanted correct identification. I see both beasties sunning in the same spot, but never together.

Shy joined the series in February 2019, and, yes, still lives in the apartment. Maybe the roomie is a pandemic putty; lots of adoptions occurred during the SARS-CoV-2 (severe acute respiratory syndrome Coronavirus 2)/COVID-19 lockdowns. Nearby, Honey Bunny may still be resident in the same complex. But, in January 2021, Veruca and her family moved from the house next door. 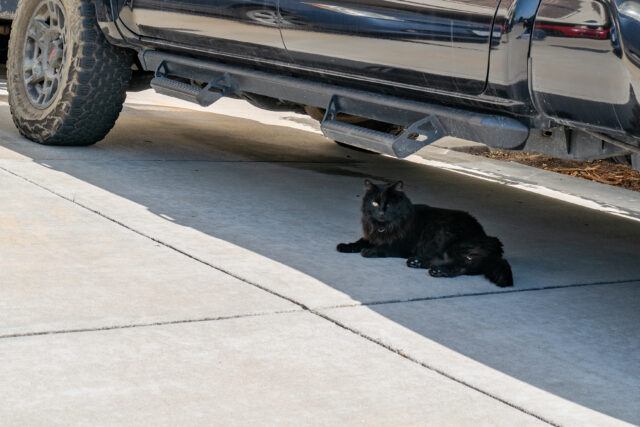 Nearly eight-year-old Dagger Tooth—the eighty-eighth putty-tat to appear in the series from Alabama Street, between boundaries Adams and Lincoln—is housemate to Dragon Claws, who was profiled nearly three months ago. She lost one eye to melanoma, but her owner says she manages well, which I can confirm from watching her romp about today.

Dagger Tooth jumps to the front of the backlog queue, which indulges her but how could I not when her brother so recently joined the series? She’s special: Local coffee shop Mystic Mocha recently named her cat of the month. 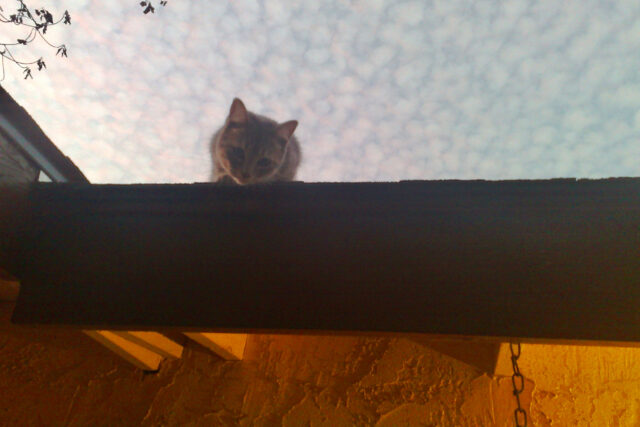 This rascal would scamper across rooftops of nearby buildings, and he peers down from one in this portrait. He is one of the few felines whose photo was taken before the series’ start on Oct. 16, 2016. The others: Blue, Farfisa, Hunter, Spot, and Woo. I saw the middle three once only but the first and last often enough. 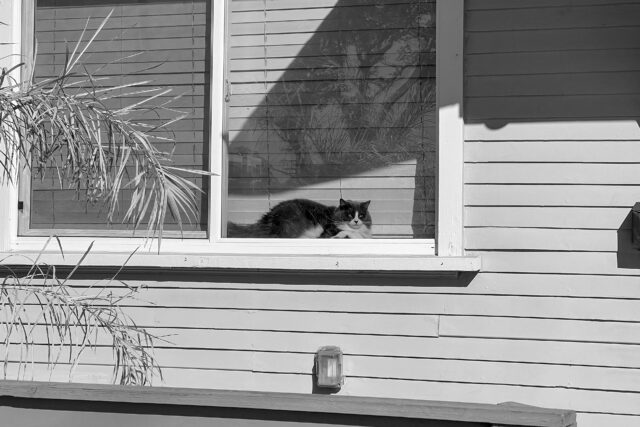 Symmetry is all wrong, which reflections off glass and greenery to the left make messier. Black-and-white conversion diminishes some of the clutter distraction and draws more attention to the kitty, who earns nickname Oreo for colors like the cream-filled cookie. 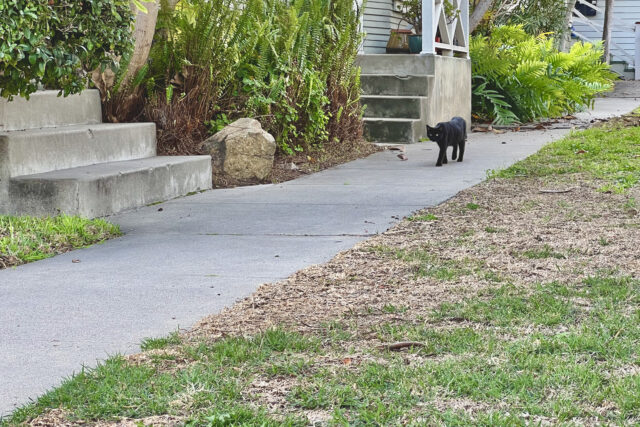 Along the same stretch of Louisiana Street, seemingly several skinny blacks are outdoor roamers—and distance identification can be tricky. Do I see the same shorthair visiting separate cottage complexes or are there two different animals? That’s the question, quite possibly unanswerable, as the first joins the series.