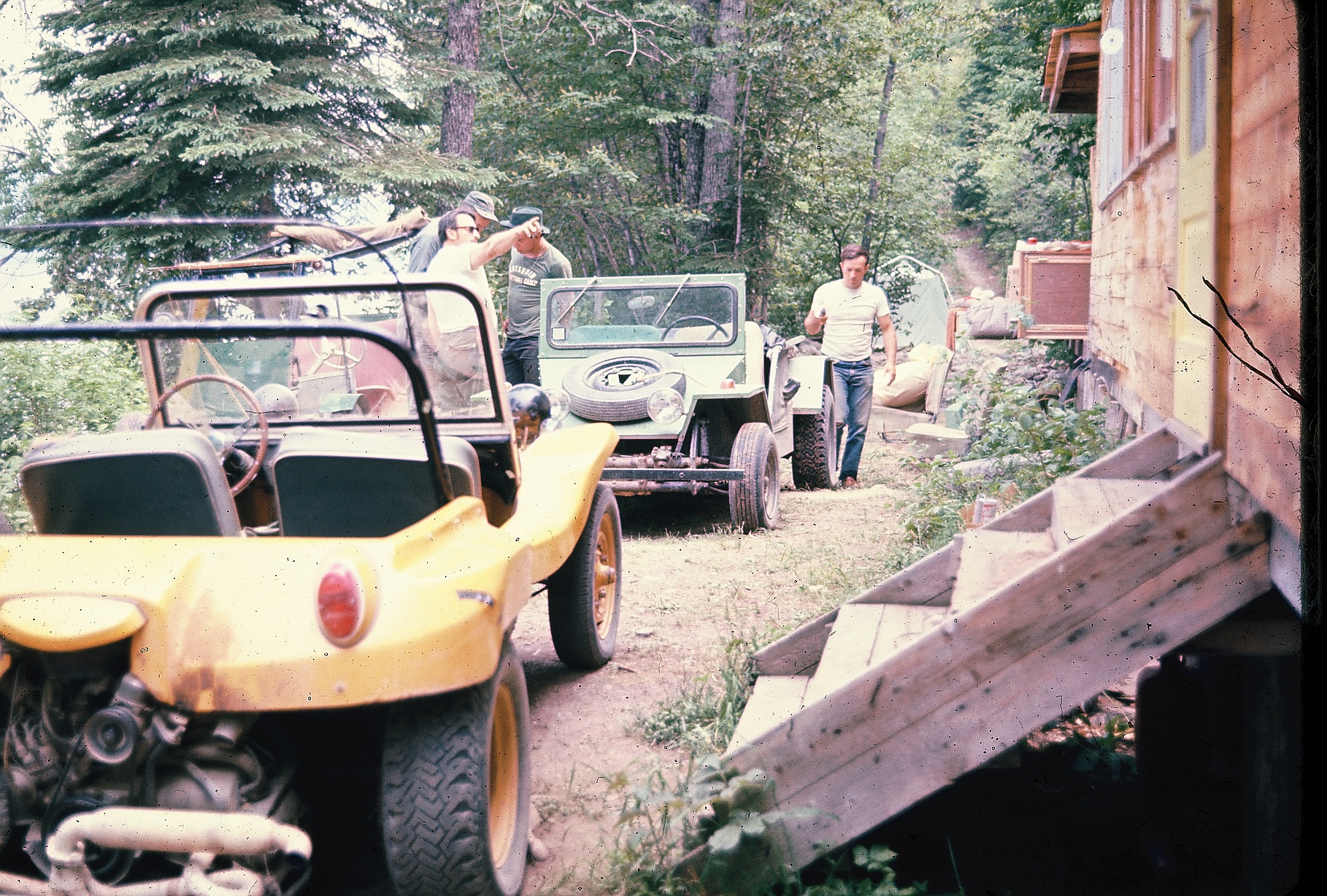 Lumberjacks long ago had cut the dirt roads the crew traveled. They entered somewhere between Allagash, St. Francis and Dickey, Maine, if I correctly recollect. Travel that year, as it would be others, was arduous. Spring rains typically washed out huge portions of road, over which the brothers and their fellow hunters would build makeshift bridges. Elsewhere, deep mud would capture and hold onto some of the vehicles. The men would pile out to lighten the load for a lightning run over the mud-washed road. Muscle and a hand wench would work free stuck vehicles.

In later years, the men would travel, for as long as eight to 10 hours the first trip of the season, a mere 17 kilometers to an old lumberjack camp my uncle rented from the paper company, I believe International Paper, but I can’t be certain. Rent amounted to $100 a year. The camp, appropriately called “Dodge City” by my uncle and father, would have made a good movie set for an old Western, given how the cabins were arranged, along the dirt road down the center way.

But that year, the men traveled about twice as far, to a civilized camp owned by friend “Buzz” Barry. I never knew Buzz’s first name, but I remember him as being almost Middle Eastern in appearance–quite dark by Maine standards–with black, grey-specked beard. Buzz was a jovial man, with a big smile, hearty laugh and strong, friendly handshake. Buzz worked customs somewhere along the Maine and Canadian border. I always assumed Fort Kent, but can’t say for certain. Even as a little kid, I liked Buzz. Everyone did.

I call Buzz’s camp civilized because it had a sink with running water and sat adjacent to Beau Lake (This Google Map puts the lake in the center. Zoom out for sense of location with respect to Northern Maine and Canada). But bathing meant skinny dipping the lake. Nor was there a toilette, but an outhouse. No power lines reached the wilderness camp, although across the lake in Quebec lights could be seen at night. Coleman lanterns dimly lit the starlit evenings on the Maine side.

Second day at camp, my dad took me bear hunting. We unexpectedly came upon a running black bear as we drove along a grassy path through the woods. My dad managed to shoot the bear from within the vehicle, which was still moving. He was excited by the kill and having me see it. But my reaction disappointed him. I showed zero excitement in his kill. C`mon, I was seven! A little duffer with little comprehension about bears, rifles and killing. My reaction proved to be only the first disappointment. The bear turned out to be a nursing sow, which meant cubs, at least one (in this case two).

My memory is fuzzy on timing, but either later that day or sometime the next, the crew headed out into the woods looking for the forlorn cubs. They hadn’t strayed far from where their mother had been killed. The men chased around one cub, which moved with surprising speed and fear! In later years I would associate the scene with men foolishly chasing chickens around a barnyard. The cub escaped up a tall spruce tree, where it clung sideways like a Kuala and howled for its mother. The bear’s cry would later remind me of Chewbacca from “Star Wars.”

Not long later, my uncle pulled out a rifle and started shooting at the bear. More frightening than the bear—and it’s size, about one meter tall, compared to a seven year old caused great distress—was the sound of the rifle and realization my uncle aimed to kill the animal. But he kept missing. One, two, three, four shots he fired, never once hitting the cub. I stood behind him, silent, shellshocked and hoping he would again miss. He did. Three more times.

Following the seventh shot, there was a tremendous crack and howl of the bear, the pitch changing the way a train sounds to passengers in a car. My uncle had shot off the tree top! He hadn’t aimed to kill, but to get the bear on the ground. The men chased the fallen cub, which scurried up a much smaller tree; I don’t recall the kind. But I do remember the men drawing pine needles to see which one of them would go up and throw down the bear. My dad drew the short needle.

Funny, I don’t recall being scared as he pulled himself up into the tree behind the bear and struggled to chuck it out. Eventually—after some deep claw wounds to his forearms—my dad detached the cub from the tree. For the second time, in just minutes, the bear fell from a tree. But this time into a tight circle of big hunters.

The next sequence is fuzzy in my memory. Events I remember well, but not timing. A seven year-old’s sense of time isn’t the most reliable. Also, I was too short to see inside the circle of hunters. Somehow the men caught the cub and stuffed it—howling, howling, howling—into a potato sack. They simply didn’t have the equipment to humanely capture a cub, nor would they have been kind anyway. These were hunters, after all. The men drove the cub back to Buzz’s camp, where some of them got together and built a wooden cage. Next day, they returned looking for the other cub, but it was gone.

That bear didn’t have much of a gentle disposition. After all, its mother died, hunters chased it, a tree fell beneath it and potato sack covered it. The animal would swipe, claws extended at anyone approaching the cage. That cub howled day and night, struggling to squeeze through its wooden prison. The camping trip would last another three days, with the hunters loathing the sound of that bear every minute. I half expected someone to take a knife or gun to the cub some night while the other men slept. Instead, all equally endured the torturous howls.

Later I learned that my uncle and dad took the cub to an animal farm in Houlton, Maine. They were promised $150 for the animal.

They never received it.