Malcolm tells how obvious losers can be winners if they don’t play by the rules:

David’s victory over Goliath, in the Biblical account, is held to be an anomaly. It was not. Davids win all the time. The political scientist Ivan Arreguín-Toft recently looked at every war fought in the past two hundred years between strong and weak combatants. The Goliaths, he found, won in 71.5 per cent of the cases. That is a remarkable fact…

In the Biblical story of David and Goliath, David initially put on a coat of mail and a brass helmet and girded himself with a sword: he prepared to wage a conventional battle of swords against Goliath. But then he stopped…and picked up those five smooth stones. What happened, Arreguín-Toft wondered, when the underdogs likewise acknowledged their weakness and chose an unconventional strategy? He went back and re-analyzed his data. In those cases, David’s winning percentage went from 28.5 to 63.6. When underdogs choose not to play by Goliath’s rules, they win, Arreguín-Toft concluded, ‘even when everything we think we know about power says they shouldn’t.‘

(For a further explanation and even application of the findings, I recommend two commentaries written by Ivan Arreguín-Toft: “How a superpower can end up losing to the little guys” and “Why victory became defeat in Iraq.” By the way, these citations aren’t meant as reflecting my personal views about wars. These happen to be the topics Ivan has applied his findings.)

Steve Jobs as David
Apple isn’t a team player. Since the company’s founding more than three decades ago, Apple has set its own rules, particularly under the two chief executive tenures of cofounder Steve Jobs.

The examples of Apple’s rule-changing behavior are simply too numerous to recount. So I’ll start with a few around the 1984 launch of Macintosh:

Apple’s business was at its worst, the company closest to expiration, during the early 1990s, when the company played more by rules established by Microsoft. Apple had put on Goliath’s mail and brandished his sword. For example, Apple embraced clones, allowing third parties to release their own hardware running Mac OS. The seemingly sensible strategy was anything but. Apple’s attempts to play by DOS/Windows PC rules put the company at grave competitive disadvantage. Steve Jobs’ late-1996 return to Apple and ascension to interim CEO  in 1997 set forth dramatic changes in the company’s business strategy. Among Steve’s first actions: The end of Mac cloning. Only Apple would make and sell Macs.

There are so many examples of Apple changing the rules, it’s hard to find ways the company played by Microsoft’s—and other Goliath’s—rules. Some examples:

Once David, Microsoft is Goliath
At one time Microsoft changed the rules, too, when David to the IBM Goliath. For example:

There are many other examples how Microsoft defied convention over the years, how the company changed the rules. No longer. Microsoft seeks to preserve the status quo. For example, top perennial design principle for Windows is backward compatibility. It’s the preservation of the past way of doing things.

Similarly, Microsoft’s approach to enterprise computing is in many ways stifling rather than empowering. I’ll elucidate some time in the future. For now, suffice to say that, for example, Microsoft strategies around Business Intelligence or Unified Communications aren’t what they are claimed to be. These strategies extend the business process already in place—they preserve the status quo, whether the customers’ or Microsoft’s existing products. Outside-the-box, rule-changing before would lead to revolutionary processes, and with them new growth for all parties.

Status quo thinking—rules established by Goliath—prevent Microsoft from being competitive and disruptive like Apple. But there are pockets of true innovation, of Davids changing the rules. Office 2007 is excellent example. Not only did Microsoft revolutionize the user interface, there was no fall-back option. Businesses couldn’t turn on the classic Office UI. Microsoft moved customers forward by defying some of its long established rules about backward compatibility. Guerrilla groups have produced some truly exciting new products, like WorldWide Telescope and—if it really works as promised—Azure Services Platform.

But Goliath thinking is so pervasive, Microsoft fails where it shouldn’t. Microsoft will never beat Google in search, because the software giant plays by the search and information giant’s rules. Microsoft must change the rules of the engagement, leveraging its strengths against Goliath Google. Malcom writes in The New Yorker:

David, let’s not forget, was a shepherd. He came at Goliath with a slingshot and staff because those were the tools of his trade. He didn’t know that duels with Philistines were supposed to proceed formally, with the crossing of swords…He brought a shepherd’s rules to the battlefield.

Microsoft must leverage its strengths, battling Google in an unexpected way. But the how must be topic of a future post. By contrast, Apple has consistently competed, at least under Steve Jobs’ leadership, in ways that emphasize its strengths rather than complying with rules set by others. Should Steve not return from his medical leave next month, Apple’s challenge will be to keep up this David thinking.

Convention is Goliath’s Game
Apple’s rule changing is remarkable, given how much ridicule Goliaths have given.”The price that the outsider pays for being so heedless of custom is, of course, the disapproval of the insider,” Malcom writes. The disapproval is another Goliath tactic, of demeaning David for violating business cultural mores. Apple has long defied the criticism, which has put Goliath Microsoft on the defensive. Apple’s “Switchers” and “Get a Mac” marketing campaigns turned the attack and ridicule back to Microsoft. Who blinked first? Microsoft did with its “I’m a PC” Mac counter-marketing campaign. 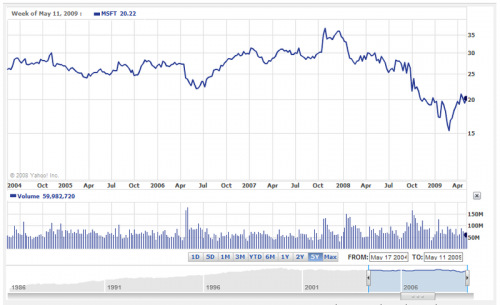 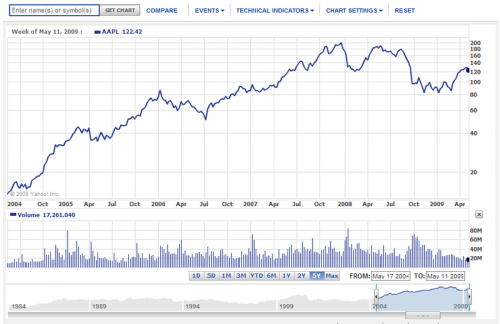 The two charts above, from Yahoo Finance, show Apple and Microsoft shares over five years through May 14, 2009. Which company’s shares would you rather own? Which company’s strategy looks better to you based on stock performance—Goliath and the status quo or David the upstart?