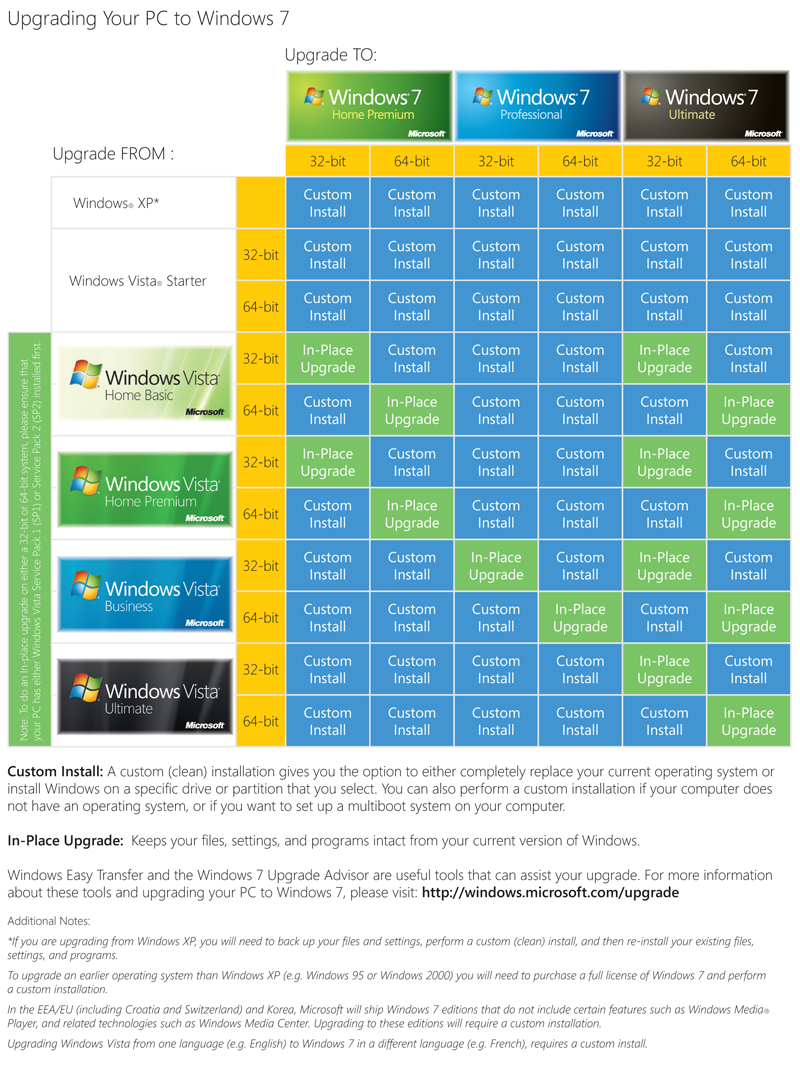 Ed tries to discredit the chart first by pointing out an error, for which he fails to give appropriate explanation or context. He writes about the chart:

First, it includes one entire row dedicated to a product that doesn’t exist: Windows Vista Starter 64-bit edition (Vista Starter is available in 32-bit only). In fact, the entire row for Vista Starter shouldn’t be there, given that it is only offered for sale on very low cost PCs in developing nations and is not sold in the U.S., Western Europe, Australia, Japan, and the rest of the developed world.

Ed is right that there is no Windows Starter 64-bit version. But there is a Windows XP 64-bit edition, and it’s not represented by the chart. It looks to me like someone transposed Windows XP and Window Starter. The chart otherwise progresses from least-featured to most-featured Windows version. So Starter, and not XP, should be first. That would put XP with 32-bit and 64-bit versions, as it should be. The simple mistake should have been caught before release, but it’s no reason to discredit the chart.

Ed is right that Windows Starter, not Windows 7 Starter, was sold on PCs outside the United States. But that doesn’t mean “the entire row for Vista Starter shouldn’t be there.” During last week’s annual Microsoft Financial Analysts Meeting, CEO Steve Ballmer made clear that Microsoft would pursue and upgrade strategy affecting low-cost PCs in emerging markets and netbooks, which he tied together in his oratory. “We have low prices on consumer PCs in emerging markets that are a lot like our netbook prices in developed markets,” he said. Steve then went on to discuss how important will be the upsell to other Windows versions:

We did a program this year to cut price in emerging markets with a theory that the lower price would lead to higher attach and higher total revenue. The theory was wrong. It’s not that it was untested, but it turns out the theory was wrong, and you will see us address the theory in the Windows 7 time frame.

We’re going to readjust those prices north, so to say, and I think with our Windows 7 SKU lineup, we also have a great chance to do some up-sell, up-sell to Windows 7 Starter, Windows 7 Home, for XP, so I would expect positive there. And, again, this is all additive to what happens with segment mix and market.

Ed uses smoke and mirrors—a mistake regarding Windows Starter—to try and discredit the chart. But there’s more. He writes:

Is anyone going to ‘upgrade’ from 64-bit Vista Business to 32-bit Windows 7 Home Premium? Half of those blue boxes are there to simply make the point that you can’t do an in-place upgrade from 32-bit to 64-bit Windows or vice versa.

Conceptually, that makes sense, until you think about what really happens in the consumer market. For example, many OEMs ship Windows Vista Business on consumer PCs. Sony does, like some other OEMs. It’s not an unrealistic scenario for someone to buy a laptop with Vista Business 64-bit and then try to migrate to Windows 7 Home Premium 32-bit, if for no other reason than they don’t know the difference.

Perhaps the chart could be clearer, but the “custom install” box for the scenario Ed balks at is a rightful warning. And it’s appropriately placed. Walt writes his tech column for consumers, the kind of buyers who might try to install Home Premium 64-bit over Business 32-bit. There, the chart is effective.

God bless him, Ed spent hours redoing Microsoft’s chart to something simpler. It’s too simple, ignoring the many real 32-bit and 64-bit combinations that consumers will encounter as they decide on which Windows 7 edition is right for them.