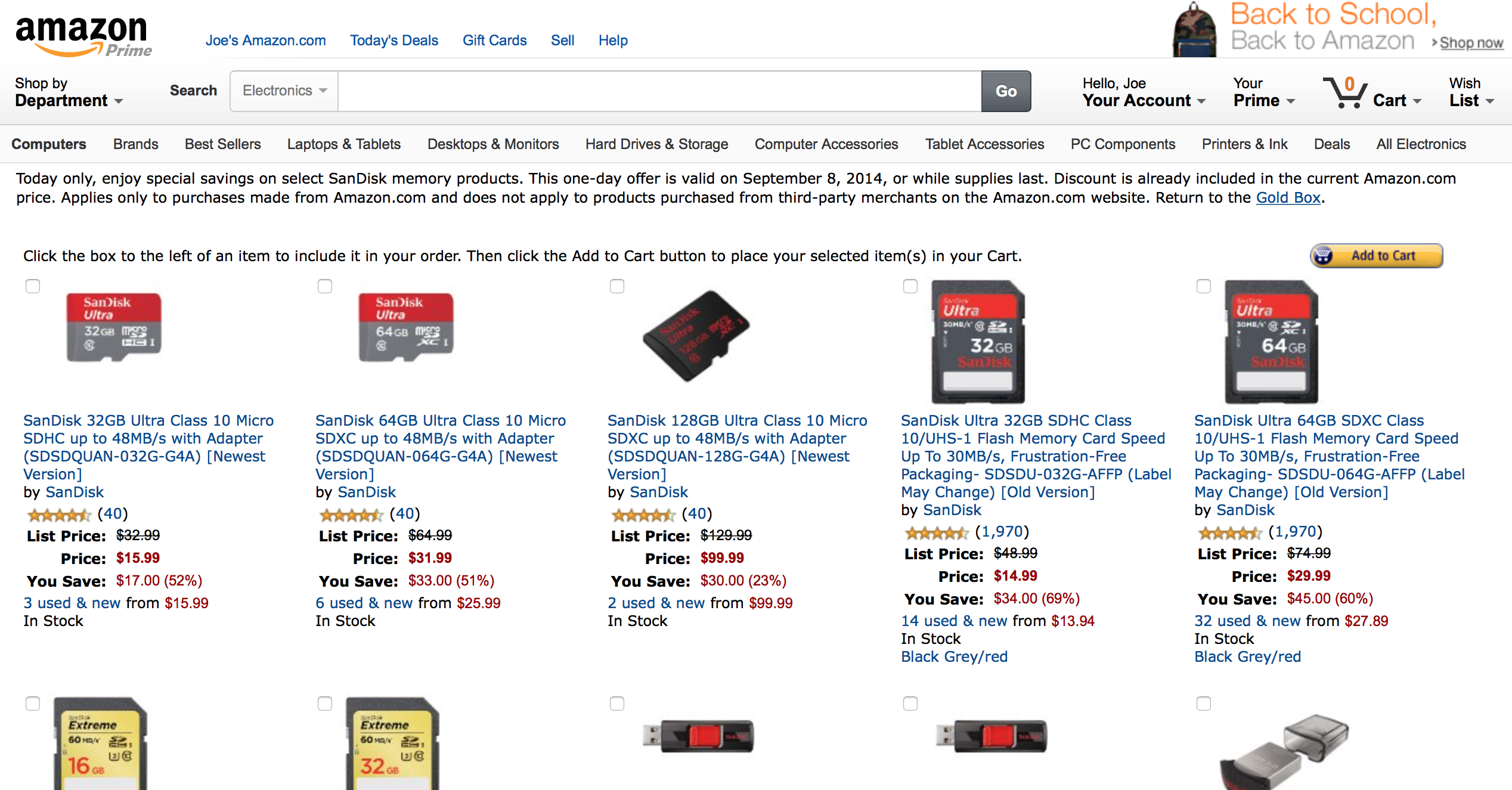 I can’t stop chuckling over one of Amazon’s many marketing sleight-of-hands today. I awoke to email promoting a one-day sale and “up to 60-percent off select SanDisk products”. Heck, my BetaNews colleague Wayne Williams even wrote a news story. But based on my recent experience buying a “SanDisk Ultra 64GB MicroSDXC Class 10 UHS Memory Card” I wonder about all the savings.

I purchased the card on July 2nd for $34.99. For the one-day sale, Amazon sells the same card for a dollar more, although a newer version (e.g., refreshed packaging and SKU) is available for $31.99. Amazon claims 64 percent and 51 percent savings—$64 and $33—respectively.

In his groundbreaking book Predictably Irrational, Dan Ariely explains how human beings tend to compare things that are closely alike and exclude others. He gives example you can verify by personal experimentation. Take someone who is physically similar to yourself, but has some defect or less appealing visual feature, to a party. Other men and women daters will tend to focus on just the two and exclude everyone else in the room. You become more desirable.

Marketers often take similar approach by using “decoys” that compel comparisons. Among Ariely’s many examples: bread-baking machines. “When Williams-Sonoma first introduced a home ‘bread bakery’ machine (for $275), most consumers were not interested”, he writes. Sales were poor in part because buyers couldn’t decide what the device might be good for. The manufacturer “brought in a market research firm, which suggested a fix: introduce an additional model of the bread maker, one that was not only larger but priced about 50 percent higher than the initial machine. Now sales began to rise (along with many loaves of bread), though it was not the larger bread maker that was being sold”.

Our brains are wired to make relative comparisons. The classic, tried-and-true method in retail is the relative comparison of prices. Product X costs Y, but you save Z off of original price A. Amazon uses this method quite successfully and perhaps most effectively when pulling together a bunch of things for a special sale that are closely alike. But the comparison that matters isn’t Products B and C but the difference between price Y and Z for each individual item.