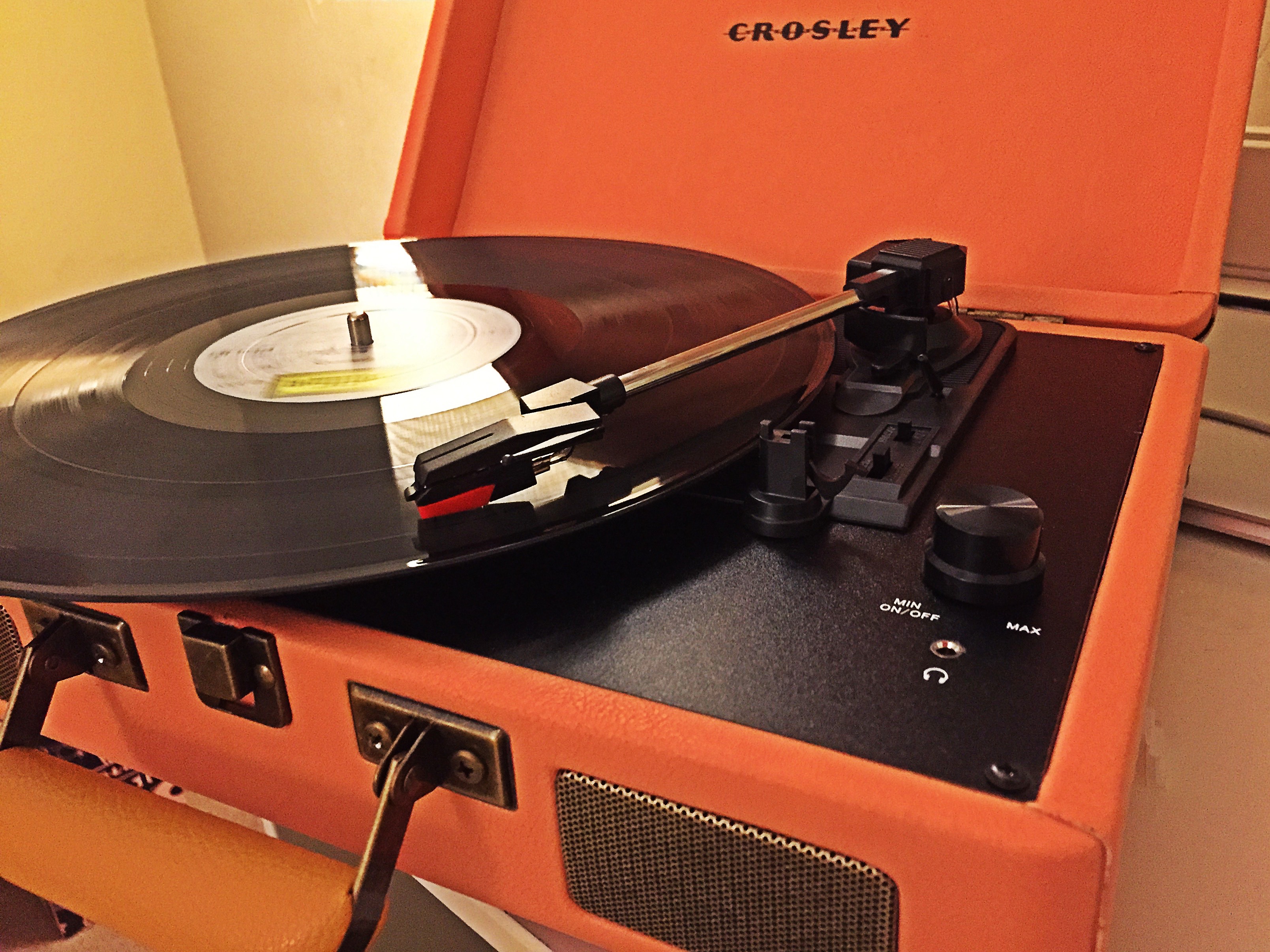 Four days before Christmas, my 20 year-old daughter texted: “Out of the `60s, `70s, and `80s, which was your favorite?” That question, her reason for asking (“been listening to lots of Beatles”), and presents’ preference (“just like vintage things, haha—and music”) led me to make a last-minute purchase: Crosley turntable, from Urban Outfitters for 20 percent off. I also grabbed The Beatles “White Album”, which will be returned December 26 for full refund.

Vinyl is vogue right now. Nielsen SoundScan’s midyear report put vinyl record sales at 4 million units, a 40-percent increase over the same time period in 2013. The pace remains fairly constant, with sales approaching 8 million for all 2014—259,000 units over Black Friday weekend, a 50-percent year-over-year increase. In a time when online music purchases are easy and selective, vinyl’s tactile experience of holding the disc and setting the needle to it feels authentic; more intimate.  In the not-so-distant future, some people will feel the same about caressing the printed page, when ebooks have displaced boundbacks like CDs did vinyl.

Millennial Madness
Two days ago, writing for NJBIZ, Andrew Sheldon observes: “There’s no other generation that has cornered the market on retro-nostalgia quite like Millennials have…Vinyl is a connection to the past; it’s a portal to a time when music seemed to play a bigger role in our culture”.

In a September 2014 post for BuzzFeed, Sapna Maheshwari claims “Urban Outfitters is now the world’s biggest seller of vinyl records”, citing claims the retailer’s CEO made during an analysts meeting. A-hum. Sapna’s lede needs clarification. Just because he says so doesn’t make it so. The connection means something, since other data suggests Millennials lead the vinyl revival, and 18-24 year-olds make up Urban Outfitters most valuable demographic. My interest is journalistic and personal, since I bought phonograph and record album at one of the company’s stores.

I agree with Andrew: “There’s a relationship that you foster with your vinyl records that would be impossible to form with any other medium of audio consumption. In a way, it speaks to another Millennial trend: Individuality”. As a Millennial, he shares from experience.

Relationship exactly describes my Millennial daughter’s interaction. She opened her vintage-style turntable last night, showing more enthusiasm for the Christmas gift than any other ever. Her old bedroom is my office (she lives with four other co-eds in a group house near college), where on the desk we set up the Crosley. She asked for instructions on how to handle the records and use the turntable. She lay on the bed and listened to the tinny sound for hours.

Around 11 p.m., she insisted on returning to College Area, even though she would be the house’s lonely bird and I suggested staying here made more sense. Today, I learned why my daughter, ah, fled. She listened late to both record albums again—that’s eight sides, and none of them from the White Album.

Turns out one of the two records is warped, such the needle slides across the first tenth of groves on both sides. I kept the album here to return for refund. The replacement White Album will be a used record, like the two other albums purchased later on December 24. What a buying experience that was, too.

Very Vintage
Rewind: Yesterday Noon, I took my 93 year-old father-in-law out to lunch and then to Starbucks. Driving to the coffee shop, I spotted Nickelodeon Records and just had to go there after dropping him home. I arrived at 1:55 p.m. only to find the metal lock-gate closed to a crack open. The kind owner (or I assume she was) had other commitments (hey, it was Christmas Eve) and firm plans to close at two. But she let me in to shop.

If I was shooting a movie and needed an iconic used record store, Nickelodeon would be the location. Cramped. Cluttered. Cleanly organized. Clutter is the feeling from so much stacked or stashed in every conceivable space. Clean and organized is how the records fill the bins, each album fitted with thick, clear plastic sleeves, and separated into artist groups by hand-written labeled dividers.

I caressed tha albums with my fingertips, treating them like antiques for sale. Each was a precious reminder of another age in American culture, and I wondered about the lives each record touched and the stories they could sound in the shop’s silence.

I picked out Meet the Beatles; after the owner told me the store specialized in soundtracks, I discovered and grabbed Woodstock as well. The two cost less than what I paid Urban Outfitters for damaged goods. “These are original pressings”, she told me. “The Beatles is mono”. Oh yeah? The old single- and three-album sets later played just fine on the Crosley.

I chose Woodstock because this semester my daughter took a sociology class about 1960s music and culture. That turned out to be wise; she recognized many of the songs. I also felt that Woodstock of all albums connected generations—at 20 she is same age as many of the kids who attended the rock festival, and Baby Boomers and Millennials are the two largest generations. Besides, there’s something authentic in that `60s sound with needle set to vinyl.

Sentiment and sadness filled me, not my daughter, when Joe Cocker started singing his cover of The Beatles’ “With a Little Help from my Friends”. Cocker, who was 25 during Woodstock, died this week at age 70. A great voice is silenced. My parents are just two years older.

Sure Sound
Debate is fierce about which sounds better, CDs or vinyl. Many purists say analog. Others favor CD digital, and I repeatedly read so-called audiophile experts claiming no one really hears the difference anyway. I can. I noticed soon as the Woodstock album started playing. To my aging ears, there’s a difference in the range. Fuller sound midrange and more trebly.

Of course, that could be the Crosley more than anything. When plugged into my Harmon Kardon SoundSticks, “fullness” is the word immediately coming to mind.

Is that better? Worse? Dunno. Different, yes, which doesn’t need to be either. Certainly, the experience is different, something my daughter and I discussed today. I explained how with vinyl you were forced to appreciate the music more because you had little choice. Record labels dictated which singles to release, and there was no other method to get just one song, or even several, from the album. You bought the whole record and listened to it. The inconvenience stretched to methods of listening, or lack of them. No shuffle. No repeat song option. You had to manually move arm and needle or flip the record.

Whether or not she will buy more vinyl is the question I ask. Will she stick with this authentic, vintage experience or tire quickly when newness and novelty wear thin? Convenience—listening to what you want, when you want, where you want, and acquired immediately—is a compelling habit that someone from her generation won’t easily discard.

For this Christmas, she’s a two-album junkie. Three, when tomorrow I buy a used White Album from Nickelodeon Records, which this year celebrates its thirtieth in business.

Editor’s Note: On December 26, my copyeditor (and spouse) recommended using the original photo rather than the 16:9 crop—to which both I applied Pixlr’s Hagrid filter. Her reasoning: Fuller view is more vintage-looking. I prefer the crop’s stronger 3D look.