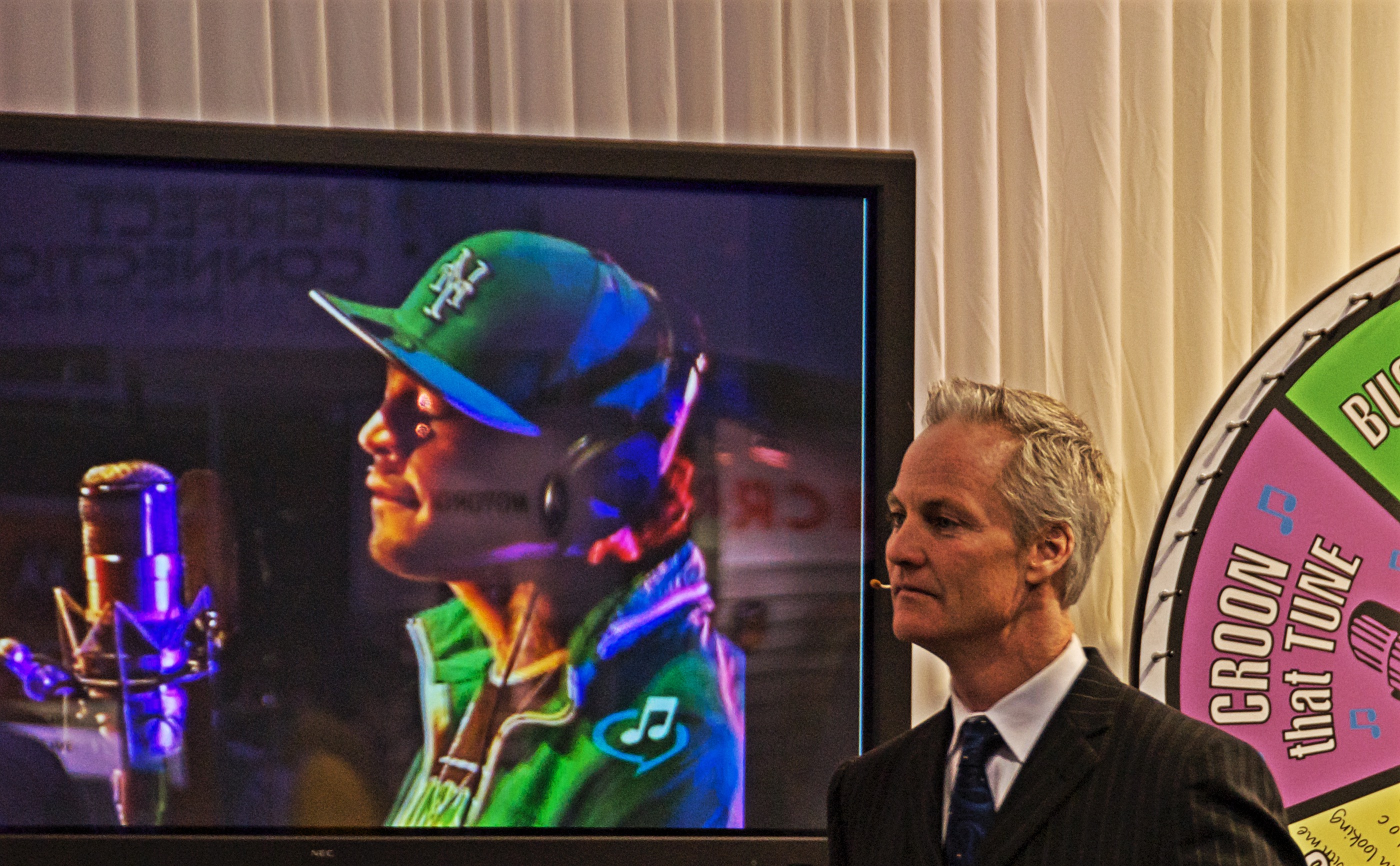 Consumer Electronics Show officially starts on January 6, but, as is customary, evening-the-night-before keynote kicks off the trade show, on what I call Day 0. Not that many vendors wait, and for good reasons. CES is such a cacophony of product announcements early is the only way to assure news coverage. Hehe, if any.

I haven’t flown to Las Vegas since 2008 and, yes, celebrate my seventh year kicking CES to the curb. It’s not worth my time or money. The news value is null. (Although I might feel differently if writing for a high-traffic tech blog where geek readers can’t get enough information fast enough about the next, new thing.  Audience matters. Write for it.) The press meetings rarely yield meaningful relationships, because you’re just one of many reporters that vendors grope for attention (CES 2014 official number of news media attendees: 6,575). Deals are made at the show, and for the companies or venture capitalists making them there is huge value rarely seen behind the mayhem. But I’m no rainmaker, just a lowly journalist.

Noise, Noise, Noise
Chaos is the best way to describe CES, which real appeal is competitive insanity. That’s the only sense I can make of the madness. “If my competitor goes and gets exposure for its product, I might lose something” or “If my competitor goes there must be value in my attending, too”. Value? Don’t make me laugh. If there was real value for most vendor attendees so many of them wouldn’t rush announcements to get ahead of the noise. Official CES 2014 number of product announcements: 20,000-plus, from 3,673 exhibits and 52,326 exhibitor attendees. Yikes!

CES 2014 was the worst for preannouncements, which already was bad two years earlier. As New Years 2015 dawned, I couldn’t imagine how this year’s show could outdo the last one. But it has, so far. This is Day -1, but a shitload of new product announcements dropped yesterday and some popped last week. The last two years, early announcements piled up on Days -1, 0, and 1. Why hold an event at all, if no one waits for the start? Or the big news is over before the first day ends?

The problem is no one wanting to miss press coverage and so everyone yells about their products at once—either before the show actually starts or all done Day 1. Seriously, I expect little meaningful left come Wednesday morning (January 7). The pileup means that:

I’m a huge fan of smaller events hosted by tech companies, where there is more focus and clear message. CES is too big for most vendors and news gatherers covering it. If there is any real value to such a large venue, it’s for retail buyers and distributors. Even then, I wonder.

The Audience Here Is…
Let’s talk about them more, the buyers and distributors, because from my vantage point on the outside looking in they are the trade show’s real audience. The rest of us are window shoppers.

What else makes sense of CES largely being the largest vaporware show on the planet? It’s bad enough that vendors yell over one another to get noticed, to glean even a smidgen of marketing attention. Many, and in past years most, announce products that don’t ship for months. Some won’t release until Holiday 2015. If you’re a consumer electronics or tech manufacturer looking to line up retail and other distributions, yelling now and shipping later is sensible enough.

Problem: From a broader product marketing perspective, announcing now and shipping months later is ditz-for-brains promotion. They say the Internet never forgets, but people do. Today’s saliva-generating tech toy is forgotten tomorrow and most certainly in three months. If not for bloggers feeding the InterWebs rumors like a momma bird worms to her brood, few people would remember CES’ new thing turned past tense. 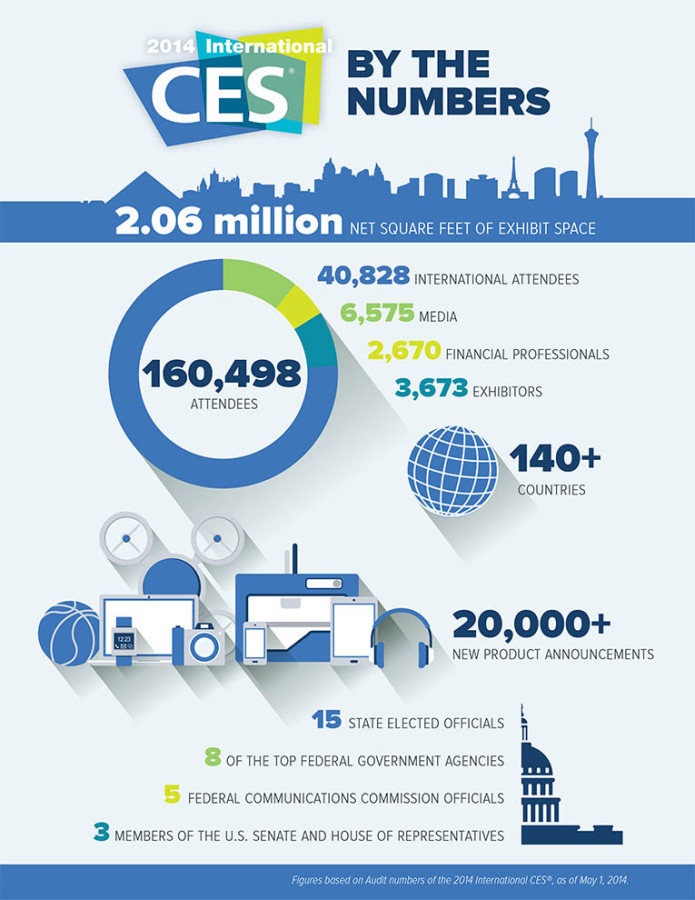 But I wonder, do you really need a huge venue like CES to line up retail and other distribution deals? I ask because of risk. Tech companies spend millions of dollars on network and other security to deter, and hopefully prevent, corporate espionage. Yet they parade trade secrets at a hugely public event, with scads of press coverage and competitors’ spies lurking everywhere. Yeah, the big manufacturer’s product gets noticed and deals are signed. But the new thing is copied and released months earlier, with the original providing free-marketing tailwind. Hehe, today’s Best of Show is tomorrow’s ripped-off and released.

That’s good segue looking at the intended CES audience another way. About one-third of 2014’s 160,498 attendees were exhibitors. Exhibit-only attendees: 97,043, or 60.5 percent of all. That’s right, less than two-thirds. Combining with exhibit-only attendees for the ratio, news media was 6.3 percent, which doesn’t seem too much, except:  There were considerably more media at CES 2014 (6,575) than conference attendees (3,987).

If Consumer Electronics Show is your big thing this week, power to you. Enjoy! As a journalist and storytelling, my attention is elsewhere.

Graphic: Courtesy of CES. The photo I snapped during CES 2008, using Nikon D200.

Editor’s Note: A version of this story appears on LinkedIn. Typically a tech-oriented commentary like this one would cross-post to BetaNews (and generate income), but I am experimenting with social media outreach. The audience I want to reach isn’t BN’s tech geeks but professionals, including other journalists and tech executives, attending or following CES 2015.