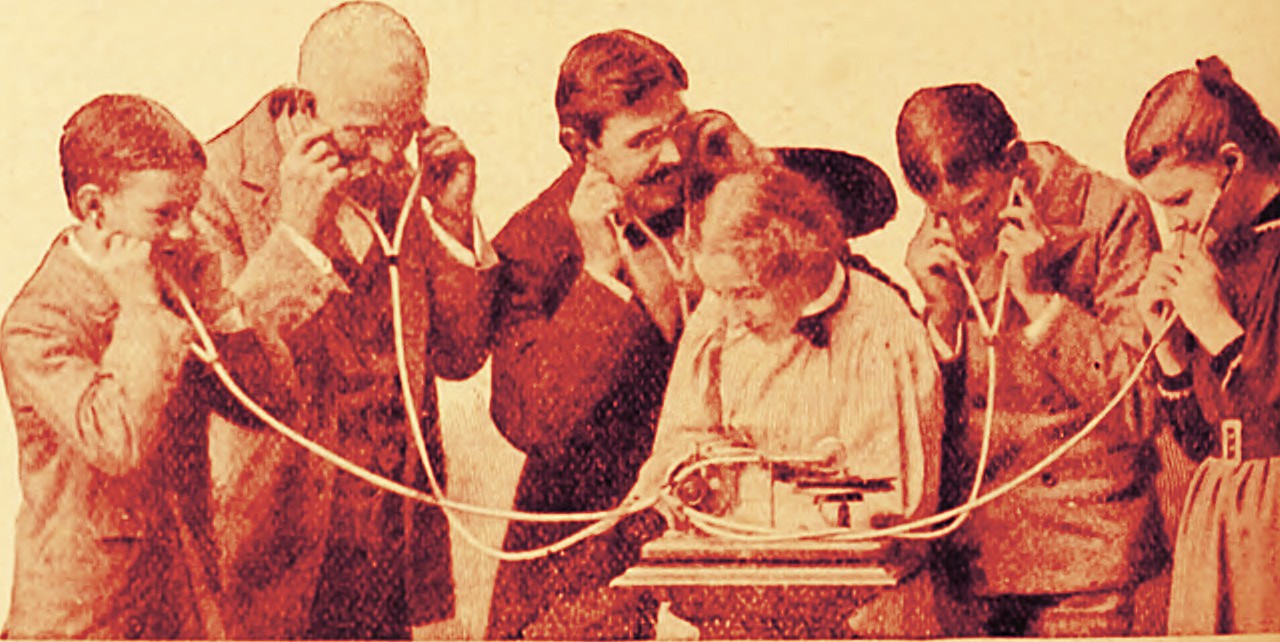 Yesterday, I posted the sixth episode, “Ode to Obesity“, in a burgeoning effort at podcasting, with journalist colleague Randall Kennedy. We quietly started releasing one-hour segments over Easter weekend at SounCcloud. We’re perfecting the model, and I gladly welcome feedback on making it better. For now, we prattle about anything and everything, and I concede that between us he is the talent.

I introduced you to Frak That! three months ago. The website largely collects our tweets, and you can find us on Twitter @frak_that. From the start, we planned the podcast to be the centerpiece of our endeavor, with the social network and branded site as supports. Everything is simply done, purposely so. Production is minimal, to diminish distractions to the content.

Distance Between
We also don’t fuss over technology. If this thing actually succeeds, by building audience and generating advertising/sponsorships, we can think about adding swanky audio gear in the future. To start, our Frakcast is a frugal affair, using what we already have on hand. Randall’s setup is a chuckle. He explains:

It can be described as follows: A crappy, low-end Galaxy Avant ($99 brand new) Samsung smartphone running a buggy, home-brewed version of AOKP KitKat. I use the speakerphone mechanism and run a noisy fan in the background just to make the recording even crappier (hey, it’s hot here).

Despite all of this, Skype somehow translates my ‘ambient-noise salad’ into an intelligible audio stream and then passes it over some 20-plus hops with a 300 millisecond delay before feeding it into your iPad Pro to as part of the most frakked-up recording process in human history. In other words, it’s a frakking minor miracle these podcasts ever get made!

Hehe, my setup doesn’t include the 12.9-inch iPad Pro, which as an experiment is my primary PC right now. I was unable to find a good Skype call recording app for iOS. so on OS X I use Skype and Call Recorder, which I purchased from Ecamm Network in August 2008 (thank-you for 8 years of free upgrades). I use 13.3-inch MacBook Pro with Retina Display, which is overkill for our purposes: 3.1GHz Intel Core i7 processor, 16GB RAM, and 256GB SSD. I wear Master & Dynamic MW60 wireless headphones, which have built-in mic and connect to the laptop via Bluetooth.

Strange, but Randall’s end of the call sounds better, despite his using smartphone mic and considering the 17,000 km (11,000 miles) that separates us. What the frak? He lives in his wife’s homeland, the island of Mauritius, which is about 1,100 km (700 miles) east of Madagascar, and 2,000 km (1,200 miles) from Southeast Africa, in the Indian Ocean.

Closeup and Personal
I started my media career in radio, hitchhiking at age 17 with a friend from Southern Maine to Boston to take the test for the Third Class radio license required by the Federal Communications Commission. None is necessary today. Randall has no broadcast experience (that I am aware) but he has a great radio voice and online presence. I’d like to see us broadcast live someday.

The podcast is extemporaneous, essentially live to tape—or is that digital (hehe)? We record 60 minutes start to finish with, so far, no editing afterwards. Topics are proposed in the hours before recording but we typically don’t discuss them beforehand. It’s riskier, but makes the flow a more natural and spontaneous conversation. I generally guide the topics, cuing from the unfolding discussion—being more the straight man and editor, to Randall as funny, fast-talking talent.

Call Recorder saves the raw recording as a QuickTime movie file that averages 2.5GB or more in size. I convert it to MP3 that compresses to about 37MB. I then prepare cover art and post to SoundCloud.

But this process compromises the spirit of replacing a laptop with iPad Pro. I welcome suggestions on a method or app for recording over Skype on iOS. Perhaps there is an alternative to Skype that records, too. Solution, anyone?

Such Foolishness
I have high hopes for Frakcast, and hopefully they aren’t misguided. In the not-so-distant future, the podcast will be available on iTunes. Randall and I will expand the format as our rapport improves and we collect feedback from early listeners.

For now, our goal is simple. There is so much ridiculous crap out on the InterWebs that the majority of people only doubt one day a year: April Fools. Our current tagline for Frak That! is “pointing out the absurd”—and making fun of it. We will also take absurd positions, whether or not we really support them, to rile up and offend people. Hopefully lots of folks will laugh, too.

We are looking for advertisers and/or sponsors for the podcast. Guests, too! You can contact me directly: joewilcox at gmail dot com. Or, better, use our official address: fu at frakthat dot com.