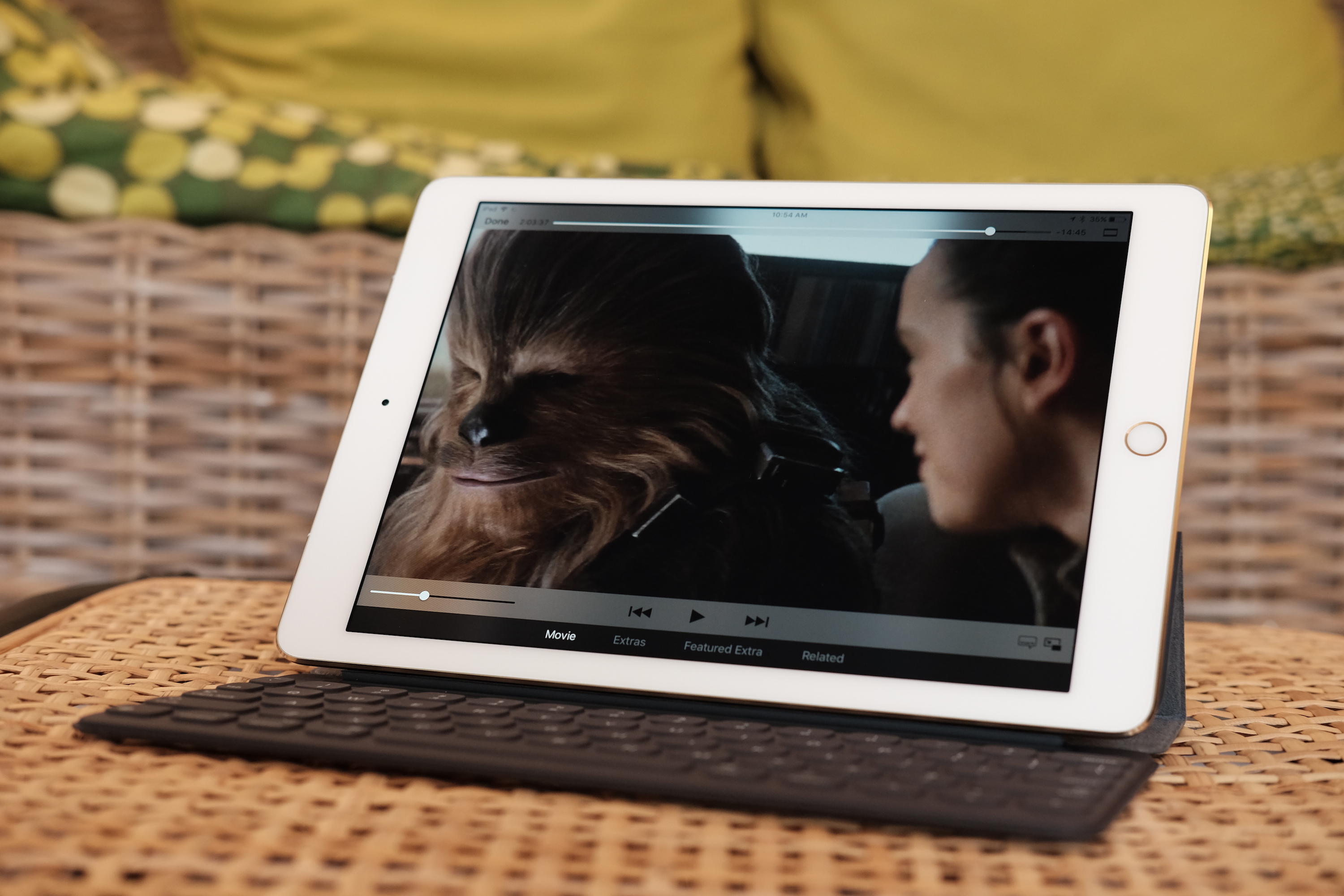 The more I use Apple’s smaller Pro tablet, the less likely I am to reach for the larger one. I have tested the 9.7-inch and 12.9-inch tabs side-by-side since March 31st—and the bigger one is my primary PC (most days). Unquestionably, the behemoth is capable of replacing a laptop, as Apple CEO Tim Cook asserts. The smaller-size model is a fine notebook companion, and certainly can substitute sometimes. But more than two weeks using this surprisingly satisfying kit, I can’t yet (and may never) recommend it as your next PC.

The 9.7-inch iPad Pro, which screen measures like all its forebears, falls into a category I griped about in September 2015: Apple products without purpose—or none that’s easily obvious to majority of shoppers. Don’t misunderstand. The technology under the hood is quite innovative, and I really, really, really  enjoy using this tablet. But I’m not most people, and looking at the broader consumer marketplace, I see the device as being more for the few than appealing to the many; that is until the next release cycle, when current prices decrease. Now, putting aside these caveats, 9.7-inch iPad Pro is the device I most often grab first. Many of the benefits have purpose that is subtle. The question: Are they good enough for you?

Apple unveiled the smaller iPad Pro on March 21, 2016. The tablet uses the same A9X chip as the 12.9-incher but cuts memory in half from 4GB. But the hand that taketh away also giveth. The smaller tab packs several nice-to-haves that will appeal to some people but won’t justify the price premium for others.

Those are the basics, now for broader, specific impressions:

1. The display is fantastic—better than great. Colors are accurate but vivid; contrast is balanced, not saturated; text is super sharp, crisp. The 9.7-inch iPad Pro packs what Apple calls the True Tone display, which uses sensors to correct color regardless the hue of your environment. The tech is clever, works well, but surprises the eyes—at first. Then you get used to the feature and miss it on other devices.

True Tone is a magnificently useful feature for people who need it, and that’s not the largest audience. Anyone who creates content—artists, filmmakers, graphic designers, photographers, web designers, and the like—can benefit from the improved color accuracy, regardless whether they’re working under bright fluorescent lights or shaded canopy seating outside the local Starbucks.

I scoffed at Apple’s launch day presentation about True Tone, but seeing is believing. The changes are subtle but most certainly noticeable, and surprising. This is one of those rare product benefits that can’t be explained to appreciate. You have to see it.

2. The four speakers bellow rich timbre and expansive soundstage. Perhaps it’s my imagination, but the audio fidelity exceeds 12.9-inch iPad Pro. Sound fills my office and reverberates off the walls. While there’s no surround-sound thumping bass, you will hear every tingle of glass and background conversions as a movie’s main characters chat in a restaurant. I would expect front-facing speakers to give greater aural swag, but the four side-facers placed on either bezel when held in landscape mode delight the ears.

3. Video consumption is best of class. True Tone display, and those speakers make movies and other videos—Coachella live on YouTube, for example—exceptionally enjoyable, regardless the smaller screen size. Snuggle up with your honey for a more intimate date-night film. The flat-screen TV is so impersonal.

4. The cameras are sleeper features. When watching Apple’s launch keynote, I chuckled at putting such kick-ass cams on a tablet. Seriously, who needs 4K video on a device like this? Then I started testing the tab, and the rational made sense. What looks like a feature without purpose, actually has plenty.

Hypothetical: You’re scouting movie locations and find one you want to present to the director. iPad Pro is portable enough to carry along, and the screen plenty large enough to compose your on-the-spot shot captured in 4K and edited on the tab. After sending the clip, you flip to landscape mode and FaceTime video chat with director and cinematographer using the 5-megapixel front-facing camera.

I can envision plenty of other scenarios, where someone working in the arts could make great use of the two camera, or the stylus (e.g. Apple Pencil).

5. If the canvas is big enough for you, the Pencil experience beats 12.9-inch iPad Pro. I’m no artist but can nevertheless handle the Pencil well enough. I find the experience to be better smaller, and that may be totally subjective—like two artists choosing different size sketch books. One prefers larger, the other smaller size.

6. Like its larger sibling, 9.7-inch iPad Pro is first and foremost for artists and other content creators. Take your pick: drawing, filmmaking, photography, and more. The tools are best for people who can produce using several tools, which elsewhere would be disparate. That’s the product with purpose. However, people who want to mostly consume content could be better satisfied spending less on iPad Air 2.

7. Performance is excellent for a tablet, but only good as a PC replacement. Compared to the 12.9-incher, Apple’s smaller iPad Pro lags a little. The tab is super fast but still slows occasionally, even with modest number apps open. The larger sibling’s speed is perfect and as good as or better than any Mac or Windows laptop. Considering my Chromebook Pixel LS and MacBook Pro pack Intel Core i7 processors and 16GB RAM, comparable subjective performance is mighty big accomplishment.

But 9.7-inch iPad Pro doesn’t keep pace, although in my testing it doesn’t fall far behind, either. That said, as tablet or even PC companion, this little jump-starter has more than enough leap. Caveat: In my early testing.

8. Buyers are short-changed on RAM. Both iPads pack the same A9X chip and M9 graphics processor. But memory is only 2GB on the smaller tab (4GB on the other). More memory might make all the difference in performance, and I see no reason why Apple halves the gigabytes.

C`mon, Mr. Cook. You give buyers the same chips and architecture, why differentiate on RAM when doing so is so unnecessary? iPad Pro screen and physical sizes are the first criteria for choosing one over the other, followed by some of the extra goodies, like display, speakers, and cameras. Users would benefit more from Apple spending shekels on 4GB RAM for all configs rather than offering 256GB storage on one model.

9. Using Apple’s Smart Keyboard is good, not great. Here’s one place where bigger is better. My finger’s dance across the larger iPad Pro’s Smart Keyboard, touch-typing with surprising accuracy. The peripheral also acts as a stand but with one position. You can’t change it, like Google Pixel C or Microsoft Surface Pro 4. For me, angle is perfect on the larger tab—but not on the smaller one. The view looking down is too sharp, while the keyboard feels confined and too close to the body to comfortably and accurately type. That is, without practice.

That said, as stated at the start, I increasingly grab the 9.7-inch iPad Pro instead of the 12.9-incher; that includes writing. While the experience isn’t as good, other benefits (like that gorgeous screen) compel me to adapt. I’ll delve deeper into this topic during my eventual product review.

10. The 9.7-inch iPad Pro is a superb PC companion. As stated previously, I would recommend the larger tablet to replace a laptop. I wouldn’t at this juncture give the smaller device the same endorsement. However, as my full review will explain, the tablet is a great companion to an existing PC and worthy purchase instead of a new computer.

Meaning: The benefits are great enough to make 9.7-inch iPad Pro your most-of-the-time companion, while relying on your old clunker occasionally. In other words, unless that laptop pushes up daises consider giving Apple your money instead. If your budget allows either/or, you won’t want new both because iPad Pro pricing is laptop-like. WiFi: $599, $749, $899. Cellular: $729, $879, $1,029. All are 32GB, 128GB, or 256GB storage, respectively. The latter two capacities push into typical laptop SSDs.

I will have lots more to say on this topic in the review, which will harp a bit about “good enough” computing and why this device crosses the threshold for creative types but won’t for the majority of buyers. Unless, they’ve got lots of disposable income for toys.

Okay, that’s a wrap. The review is weeks away, as I give both iPad Pros my full, all-day, every-day attention. I want to knuckle down with both tabs for some time; so you won’t have to.