The most notable news media event of the week goes to New York Daily News, which basked in the illumination of social media’s ire over accusations that writer Shaun King had plagiarized text verbatim from a story that appeared on the Daily Beast. But like so much that rises to the top of Twittersphere. the backstory is more complicated. Turns out that an editor removed attribution, accidentally, he says. The tabloid subsequently fired him.

Unless there was deliberate and chronic attribution removal, editor Jotham Sederstrom’s  dismissal after seven years service stinks of face-saving. He made a mistake, two admittedly, and takes full responsibility. In a Medium post worthy of inclusion in J-School ethics classes, he writes: “This was my fault and I accept 100 percent of the blame”. That’s an editor you want on staff. He stands behind his writer, and rightly protects the only commodity any journalist can truly offer an audience: Trustworthiness.

The firing perpetuates problems that shake the Fourth Estate’s foundations. The Daily News is among the troublemakers, qualifying that its long legacy of accuracy and accountability to local audience make the paper among the least offenders. That said, Jotham Sederstrom’s firing is more symptom than remedy, which point this analysis explains.

Bad Habit One: Single-Sourcing
Twenty-first Century journalism is guilty of several ethical bad habits intertwined around story sourcing. The first is a worn shoe I’ve beat on the podium for years: Reporters single-sourcing some news story, blog, or social media post rather than investigating—e.g. first-hand reporting. I tell my writers to adhere to the Prime Directive: “Write what you know to be true in moment”. If you didn’t communicate with the source(s) firsthand, you don’t know what’s true. Some of my past posts on this topic:

The oldest analysis among the five is still the best, if you read no other.

Bad Habit Two: Link-Sourcing
A variation of the first problem extends it: Rather than use one single source, the reporter aggregates several of them to write a story that often, but not always, appears to be originally gathered. But in reality there is little, if any, original content or first-hand reporting. New media organizations are most guilty-practitioners. For example. it’s fairly common to see a breaking news story on the Huffington Post splashing large-font, tabloid-like headline that evokes authority, when the news is little more than content culled from elsewhere.

That’s the more extreme execution, but there’s a fair range—from off-hand, link-only citations to source identity with link. Along the graduation are stories with occasional link-sourcing supporting some original reporting to none at all. Off-hand linking, where there is no overt citation (e;g. Fred MacMurray of the My Three Sons Times), makes the story’s reporting seem more authoritative and original than it really is.

Accuracy and accountability lose luster when numbed audiences come to accept misinformation and rumors as normal—or, to poach a phrase, the new normal.

Bad Habit Three: Peer-Sourcing
Another sourcing problem predates the web’s rising as publishing platform, but the practice is now a plague raging across the news reporting landscape: Quoting other journalists, or their reporting—and it’s the, ah, source of the sourcing faux pas with Shaun King’s story.

The aforementioned single-sourcing of blogs and the like is really an extension of the long-standing practice of peer-sourcing. The writer incorporates something from the reporting of another news gatherer, whom he or she trusts (well, hopefully). However, the ethical acceptance of this behavior disintegrates before the common practice of single-sourcing and aggregation that replaces original reporting.

Stated differently: Journalist A is known for her responsible reporting and she is on-site at a school shooting, making her a reasonable and credible source for your breaking stories about the event. She has access that you don’t. But as the drama unfolds, you should do your own reporting. Gather your facts, rather than rely solely on other news gatherers. That’s responsible peer-sourcing. Sadly, the common practice is to rely on peers primarily without confirming or extending the reporting.

Bad Habit Four: Peer Authorities
Related to peer-sourcing is the widespread practice of using journalists as trusted authorities. Best example is when, say, during a NPR broadcast, several reporters from other news organizations are gathered as experts.

There’s something incestuous about the practice. Your organization assembles a panel of other journalists to talk about the Presidential primaries or terrorist attacks in Europe. If these peers know something that you don’t, you aren’t fulfilling your responsibility to tell your audience what you know to be true. Report! Don’t collect information live on TV from other journalists as peer-sources.

I generally oppose journalists using other journalists as authorities, and I admit to taking the role over the years, mainly for broadcast networks like CNN or NPR. But my attitudes changed this decade as standards for responsible reporting declined.

An exception, and it’s a good one: When news organizations partner to report on a story, as ProPublica frequently does. That circumstance would bring together, say, ProPublica and NPR reporters on air to discuss a story they investigated together.

Bad Habits in Practice: Second-hand Sourcing
Shaun King sources a peer to extend his story. He isn’t guilty of these other bad peer-sourcing behaviors. However, he cites two paragraphs of text that also includes quotes, which complicate the editing and also reading. I can see how an editor might inadvertently assume the text was part of the writer’s original reporting because of quotes in both paragraphs—one from a document; a reasonable editor could easily assume that his typically thorough reporter obtained firsthand.

Got to confess: I do quote journalists, and even bloggers, on my blog, because the writing is more personal or academic-intended commentary. My practice is stricter when writing news stories, elsewhere. I report, rather than cite, which should be every news gatherers practice. There are exceptions, of course, when quoting from a blog or news story at length to comment about it. That’s very different than sourcing it, however.

I also shy away from sourcing something that includes quotes. There are exceptions. You talked to President of the United States, I can’t, so I might use and cite your quote from him. But generally speaking, peer-sourcing content that quotes another source is sloppy news reporting. In instances where a document is quoted, and you could have obtained a timely copy, the practice is lazy reporting.

This kind of second-hand sourcing sometimes is necessary, when providing your audience with the most timely and accurate news storytelling. However, I often see the practice used for something else: To fill gaps in the reporting and in a manner that gives better impression about the reporting.

Bad Habits in Practice: Poorly-presented Blockquotes
I make no accusations about Shaun King’s reporting other than to suggest that an editor could be confused by second-hand sourced quotes within two peer-sourced paragraphs. That brings me to the Daily News formatting for blockquotes and their sources. On the web, the two paragraphs do not stand out from the rest of the narrative. They look to the reader, which could include the editor, as part of the reporter’s own copy. The explicit quotes aren’t at all distinct, beyond quotation marks, further confused by quotes within the Daily Beast story excerpt. 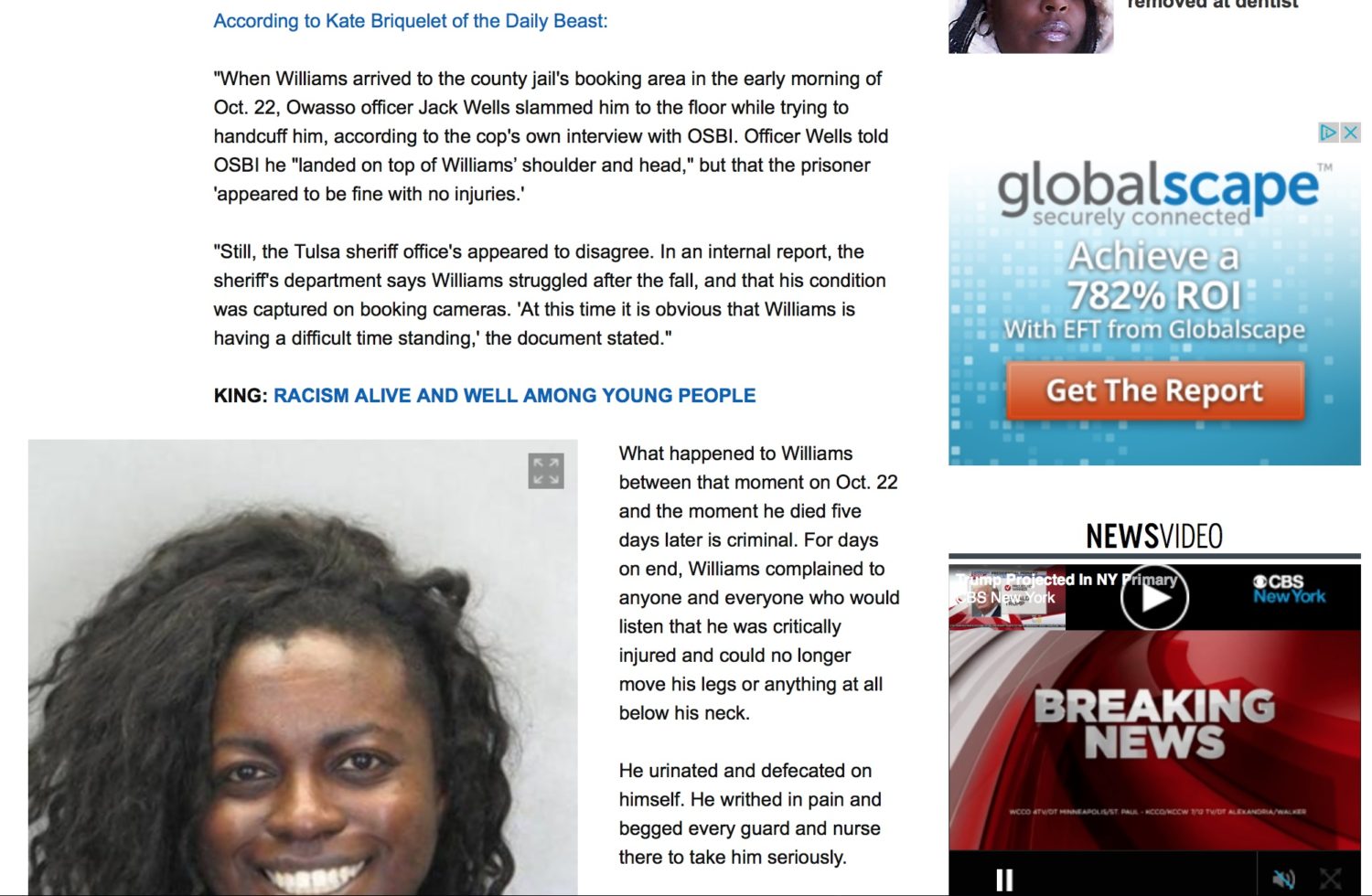 Take a look at the screenshot. The citation and link could easily be missed by readers, too, or easily omitted by a distracted editor who, again, might reasonably assume reading the two paragraphs that they are the writer’s own work.

The Daily News needs to better set apart blockquptes and sourcing for them—unless, of course, the practice is deliberate. As previously stated, blending long peer-sourced excerpts into the text makes the story seem stronger than it is. Meaning: The difference between you being the trusted authority and relying on somebody else.

Finally…
I question the reasoning behind Jotham Sederstrom’s dismissal.

The Daily News should change how web stories present long quotes from other news sources and the citation for them.

Reporters should be discouraged from using second-hand quotes. The only credible source is the one obtained first-hand.

Don’t misunderstand, I have great respect for the Daily News. Tabloids like this one often don’t command the same respect as, say, the New York Times, but it is deserved. Sure, headlines typically are punchy, if not raunchy; many stories are sensational. But the News, like many other (but of course not all) tabloids has high standards for reporting accuracy and sourcing. Any news organization serving a local audience can be nothing less—and continue publishing.

In that context, I can understand the editor’s dismissal for excluding Shaun King’s source(s). High standards demand strict accountability.

Ten years ago in July I bought from iTunes six-part documentary “Tabloid Wars“, which bravo aired in summer 2006. The series follows Daily News reporters as they literally pound pavements searching for stories and responsibly source and report them. Apple no longer sells the TV program, but it’s available from Amazon; digital download, $9.99.