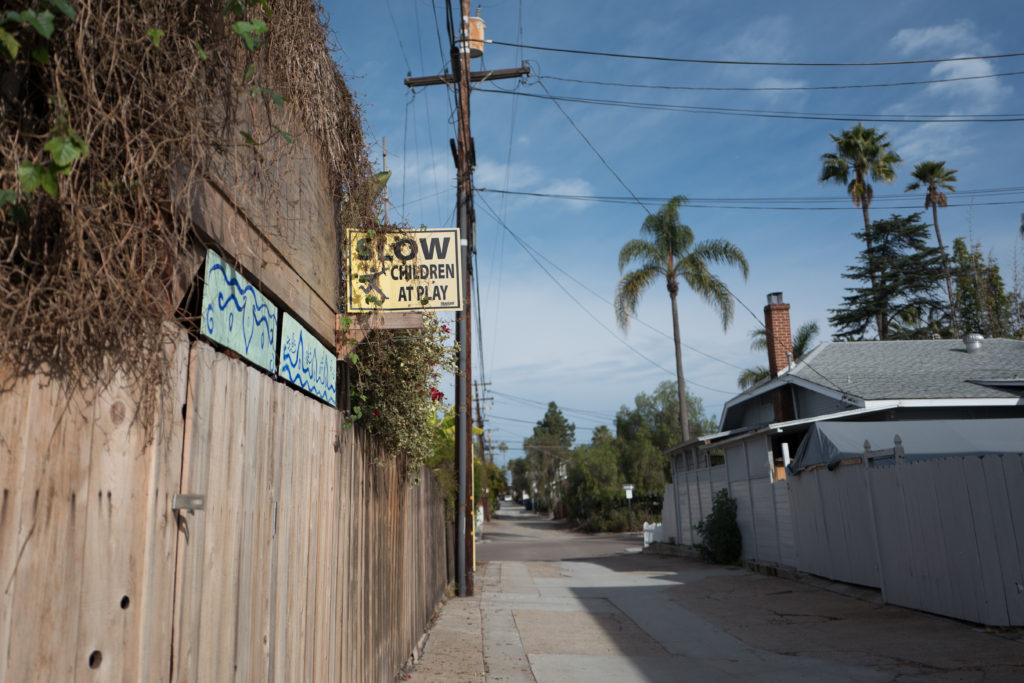 Our old apartment of 10 years overlooked an alley, from the dining room and my office. There is something compelling about alley life that gives different insight into San Diego neighborhoods. For example, here in University Heights, utility poles run along the alleys rather than major residential streets. Palm trees reach for the skies in their place.

Many properties keep trash cans and dumpsters in the alleys, where residents will place unwanted items they want to give away rather than throw away. Savengers on foot, bicycle, or truck collect this stuff or forage for redeemable bottles and cans. Some of these people rip open bags of refuse, which attracts wildlife—ranging from birds to possums.

Some residences, while having street numbers, are alley accessible only. I think of them as hidden homes, tucked away from traffic—other than parked cars, which there are many, whether in assigned spaces or alley-facing garages. Alleys can be dangerous, when drivers speed down them—perhaps from their assigned parking space or when cutting through to a street.

I sometimes will walk down these hidden throughways and absorb the ambiance and observe the story they tell about San Diego living. Taken with Leica Q at 10:09 this morning, the Featured Image is from the alley between Louisiana and Mississippi streets, before it crosses Mission. I had never seen a sign like this in any alley—and there are few that I haven’t walked in University Heights. (Photo vitals, aperture manually set: f/2, ISO 100, 1/8000 sec, 28mm.)

So surprised, I returned around 3:30 p.m. PST. Timing was lucky. As I approached the signage from other end of the block, two people (presumably parents) walked with a kid. Seconds after they disappeared into some residence’s back entrance, a school bus pulled out like an apparition. I have seen FedEx, UPS, and USPS trucks in alleys but never a school bus.

Kids at play are common enough. For example, teens shoot hoops in the alley behind the apartment we moved to in October 2017. Signs shouldn’t be necessary. Drivers, please, slow down!