Consider, as example, the soon-to-open Blvd North Park, which takes up the block between Alabama and Florida on El Cajon. The complex is a wonder of marketing myths—ah, lies. As you can see from the Featured Image, which shows the leasing booth and building behind, the structure is very much under construction. Yet the leasing manger told me two weeks ago that the place would open—meaning be ready for tenants—on September 1. That’s the first lie; okay, a presumed one. The second is indisputable.

What’s that real estate phrase? “Location. Location. Location”. North Park is a trendy neighborhood that appeals to a certain, ah, segment of professional Millennials and Xers. But the Blvd North Park is categorically located in University Heights. The leasing manager even acknowledged as much, when I asserted such. I guess the new thing in real estate is this: If you can’t get the location you want, you pretend where it is. Tell the lie long enough, and people will call that stretch of El Cajon North Park.

Interestingly, I can find no meaningful information on the complex’s website about the property. A San Diego Reader story from October 2016 states that there will be “80 one-bedroom and 85 two-bedroom units”, while a “30-unit building will be located in the back of the property”. The leasing manger says that one will open in October.

Rising Rentals
Lie No. 3 is affordability. The leasing manager told me that one-bedroom rents will go from around $1,880—a polite way of saying nineteen-hundred—to $3,900. Two bedrooms: $2,400 (or did she say twenty-five) to $4,500. Chew on those numbers and ask who can pay such rents? Somebody can, because she had already leased several $3,900 apartments. According to the Reader, 14 of the secondary building’s 30 units will be affordable—whatever that means.

From one, terrible perspective, the property’s rents appear reasonable. According to Rent.com’s 2019 price analysis, the average one-bedroom in San Diego rents for $2,300 and two for $2,823. But the underlying trends are onerous, with year-over-year increases of 17 percent and 16.6 percent, respectively—rises ranking second and fifth (also respectively) among the “100 most populist U.S. cities”. For comparison, nationally, one-bedroom rents rose 4.3 percent and two by 4.2 percent.

But new entrants like Blvd North Park make San Diego housing less affordable—and that’s a trend. According to a study from MarketPointe Realty Advisors and San Diego Tribune‘s reporting about it: “High-end apartment complexes…raise the rates substantially, especially those that opened in the last few months…Older apartments don’t command the same high rents. The average monthly rent for a unit that opened before 2000 was $1,730, as opposed to $2,721 for a unit that opened this year”. In other words, newer builds cater to people who can spend more and in the process drive up rental prices overall. 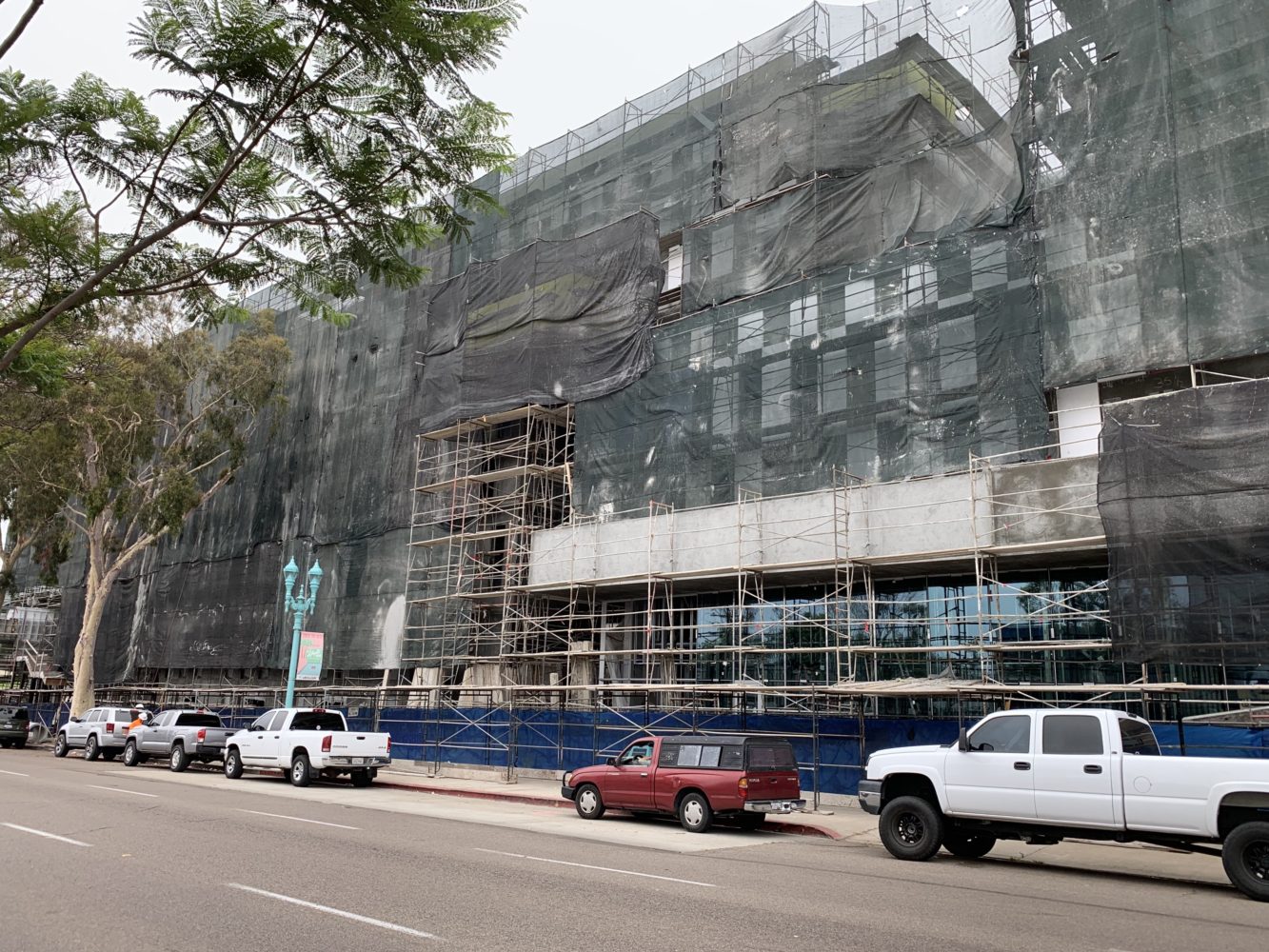 Homeless Crisis
My question, what makes one apartment worth $3,900 or $4,500 monthly? Apparently amenities—such as dozens of floor plans and, for some residents, “bay views”. But bay views is misleading enough to qualify as Lie No. 4. Perhaps the ocean will be visible a dozen kilometers or so away from some flats, but for many tenants the main view will be El Cajon, which along that stretch is more skid row than the “Be the Scene” locale the slogan suggests. What a contrast will be the El Cajon homeless in need of affordable housing and people paying forty-five hundred bucks to live over them. Literally and figuratively.

According to Zillow, San Diegan renters on average spend 40.2 percent of their monthly income on rent. “Any uptick in a community’s rent affordability beyond 22 percent translates into more people experiencing homelessness” Zillow finds. “The second threshold is 32 percent: Any increase in rent affordability beyond 32 percent leads to a faster-rising rate of homelessness—which could mean a homelessness crisis”. There are about 5,000 homeless people in San Diego, with about 2,600 of them unsheltered. Countywide total: 8,000.

‘Fringe’ Marketing
Moving along, marketing claims from the property’s website make me laugh: “If you’re looking to live in a meaningful space, outside the fringe, Blvd just might be your kind of place where the floor plans are unique—just like people. Steeped in the heart of North Park, Blvd is the soul of urban living”. The “fringe” is the downtrodden area of El Cajon that the building overlooks. “The heart of North Park” is located four blocks south and nine more East at 30th Street, whereabouts is the community’s sign hanging over and across University Avenue. Guess that makes Lie No. 5.

The sixth lie is nastiest for established University Heights neighbors. Blvd North Park will provide one parking space for each apartment—and two for some of the larger, and costlier, residences. The leasing manager acknowledged that some tenants would need additional parking. She had the audacity to tell me that there would be plenty enough on the street once construction completed and workers no longer parked nearby. Traffic congestion and parking problems are certainties, I not-so-boldly predict.

What I don’t know, and surely should have asked about: Square footage. How much will residents get for their monthly rentals? Additionally: Do tenants pay separately for water? Are pets allowed, and, if so, are there extra monthly charges for them ($100 per animal isn’t uncommon in San Diego)? The answers could greatly increase the already stated numbers. If they do, what’s affordable about that?

I captured both illustrative images using iPhone XS—the first on July 4, 2019 and the second today. Vitals: f/1.8, ISO 25, 1/2481 sec, 4.25mm; 5:05 p.m. PDT. The other is similar but 1/495 sec and 9:58 a.m. The primary pic is along Florida Street. Its companion looks at the building, and continuing construction, along El Cajon Blvd. BTW, geotagging clearly identifies the neighborhood as University Heights.