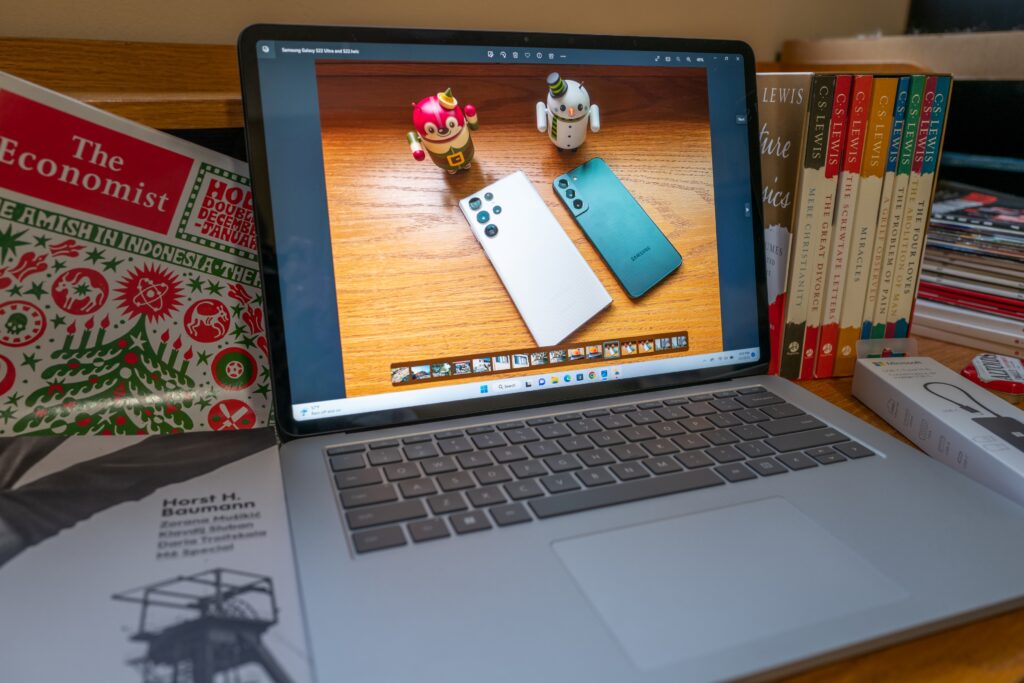 My Mac commitment (iPad and iPhone, too) had been pretty solid since buying the 15.4-inch laptop in November 2016, followed by the 16-incher three years later and 16.2-inch M1 model in October 2021. I owned successive iPads and iPhones, as well.

However, technology-unrelated dissatisfaction increased for numerous reasons before reaching a crescendo two months ago when my daughter foolishly locked herself out of all Apple devices and iCloud. Additionally, I am displeased with how the fruit-logo company caters to China and otherwise conducts logistical operations there—and more reasons, but none needing further elucidation to make the point.

My wife and I discussed changing platforms, and she surprised by being enthusiastic about the idea. We chose to return to Windows, and on Dec. 8, 2022 I ordered Surface Laptop 5 for her and Surface Laptop Studio for me from Microsoft Store. A few hours later, I had second thoughts and attempted to cancel the order. But fast and efficient processing had already progressed too far. We were committed, although returning the laptops would still be an option. UPS delivered both on the 12th.

Samsung offered excellent trade-in price for my wife’s iPhone 13 Pro; mine was gifted to our daughter. Annie’s 13.3-inch MBP sold on Christmas day to parents buying for their son attending college. A professor and his wife purchased my M1 monster on December 28. My wife and I will keep our iPads, during the transition period.

We are both extremely satisfied with our new Androids. I needed a few days to adjust to the S22 Ultra’s size. Overall, I love the smartphone; no complaints, no regrets. With the trade-in and Samsung holiday discounts, which included free storage upgrades to 256GB and 512GB for the smaller and larger Galaxys, respectively, the two together cost less than one iPhone 14 Pro.

Both computers are 3:2 aspect ratio, which is way better for browsing the web or writing than MacBook Pros’ 16:10.

What my Microsoft laptop lacks in performance compared to the Apple notebook, it makes up in character and innovative benefits. For example, extended utility includes three different touchscreen positions: standard (for typical laptop use); stage (for gaming or content consumption); studio (for pen usage as a tablet).

Until last month, I hadn’t used Microsoft’s operating system since version 7 in 2009. Yeah, 14 years ago. Not since the last economic crisis. Oh the whiles of recessionary computing! Windows 11’s GUI is an intuitive quick fit and all the plumbing, so to speak, pretty much is where I would expect to find it and operationally quite familiar.

Wrapping up, two words: No regrets. Computing is suddenly exciting again. Fresh operating systems. More choices. Greater diversity. Cleverly chosen innovations. By contrast, Apple had long lost its flavor (savor, if you prefer). The platforms in some ways work too well, such that they had become boring. I read somewhere ages ago that many marriages ending in divorce collapse because of sameness, doldrums. The couple become too compatible to the point they lose all interest in one another. That’s my relationship, in a way, with iCloud, iOS, and macOS. As such, also gone: Apple One (cloud subscription), Apple TV (streaming box), and HomePod (a pair).

The Featured Image surrounds Surface Laptop Studio with clutter, for no particular reason. I am no hoarder or pack rat: The Economist and LFI are newest issues; the C.S. Lewis books are yet to be read; the Microsoft USB-C Travel Hub waits to be opened; the stack of magazines still need to read. In shots for some future, full review, I will showcase the three display positions and pleasantly present the computer. Vitals, aperture manually set: f/4, ISO 100, 1/15 sec, 28mm; 4:10 p.m. PST, today; Leica Q2.

Editor’s Note: “Galaxys” is not misspelled; convention chosen because of brand name.