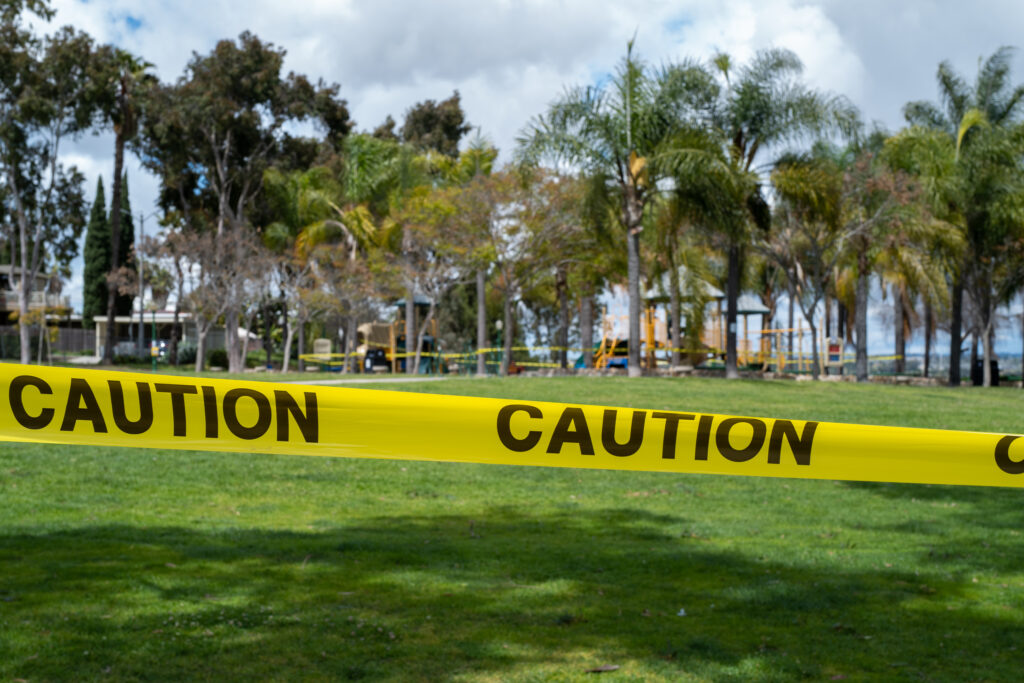 Something puzzles me, or did until seeing the scene that became the Featured Image. Today, I observed several family groups—parents and youngsters of various ages—walking around the neighborhood. We’re talking four or more people slowly moving down the sidewalk. I wondered: “Why today? Why not on other days? Are they bored being stuck inside, observing the “shelter-in-place” order?” By taking over a sidewalk, they impede other folks also seeking fresh air and exercise—and they draw attention, presumably silent complaint from many passersby, because of their numbers.

The answers to all the questions are one, and I am troubled by it. As my wife and I approached Trolley Barn Park this afternoon, we could see yellow “Caution” tape flapping in the wind. The entire thing had been cordoned off, with extra warning wrapped around the kids play area. The barrier wasn’t there yesterday, and its placement partly explains why I see more parents and children roaming about. The safest place for them to be, when not inside their residences, is what the city/county closed down.

San Diego is a metro of renters—48.5 percent, according to Sperling’s Best Places. From my sojourns seeking animal portraits for my “Cats of University Heights” series, I can say anecdotally, but with authority, that the majority of UH residents rent. Multi-unit buildings are everywhere. Families living within won’t have yards where kids can play during the lockdown. Public parks are a vital recreational resource—and their importance increases with all schools closed, many adults furloughed or fired from their jobs, and everyone instructed to stay home as much as possible.

“Social distancing“—physical separation of at least six feet (1.8 meters)—is easier maintained around a spacious park than along a sidewalk. Those family groups and their neighbors would be safer from SARS-CoV-2 (severe acute respiratory syndrome Coronavirus 2)—also known as COVID-19—infection if residents could gather in groups at Trolley Barn. Then there are the people who often use the grassy area to exercise, such as doing Tai Chi. In my wanderings down and around Adams Ave. along the park, I have yet to see anyone abuse “social distancing”. Most citizens are compliant, for which their good behavior is punished.

Not long after I used Leica Q2 to take photos of the yellow tape, Annie and I decided we really needed a change of scenery. So we drove through Talmadge to Redwood Village and checked out other grocery stores, but stopped at none after seeing long lines of shoppers waiting outside. Along the way, we passed by two other parks—both with kids play areas—that the city/county had closed off.

I must agree with Gabriel Popkin, who opines on March 24, 2020 for the Washington Post: “Don’t cancel the outdoors. We need it to stay sane. The health consequences of cutting ourselves off from nature could be catastrophic”. He means bigger places than tiny Trolley Barn, but San Diego has prohibited their access, too. He writes:

Especially at a time of crisis and high anxiety, we need a safe outlet, and the outdoors is pretty much the only one left. While the impulse to shut down everything is understandable, blocking the public’s access to nature could have terrible consequences. It doesn’t take a physiologist or neurobiologist to realize that a walk in the woods does the mind and body good…

And let’s not ignore the health benefits of exercise—including for fighting some of the ‘underlying conditions’ that increase COVID-19 risk. Just two weeks without exercise can have harmful metabolic impacts such as elevated blood sugar and lowered insulin sensitivity. We’re all barred from gyms; if the only place we can walk or run is on sidewalks, those will get crowded fast.

Give people the opportunity to be responsible in public parks that are for many folks sacred ground. Don’t take choice away. In a quest to “flatten the curve“—that is slow the pandemic‘s progress—Americans have put aside financial security, agreed to live in self-imposed imprisonment, and sacrificed freedom to move about and to socialize; for starters. Is a little natural space or playground for the kiddies so much to ask? Of course not.