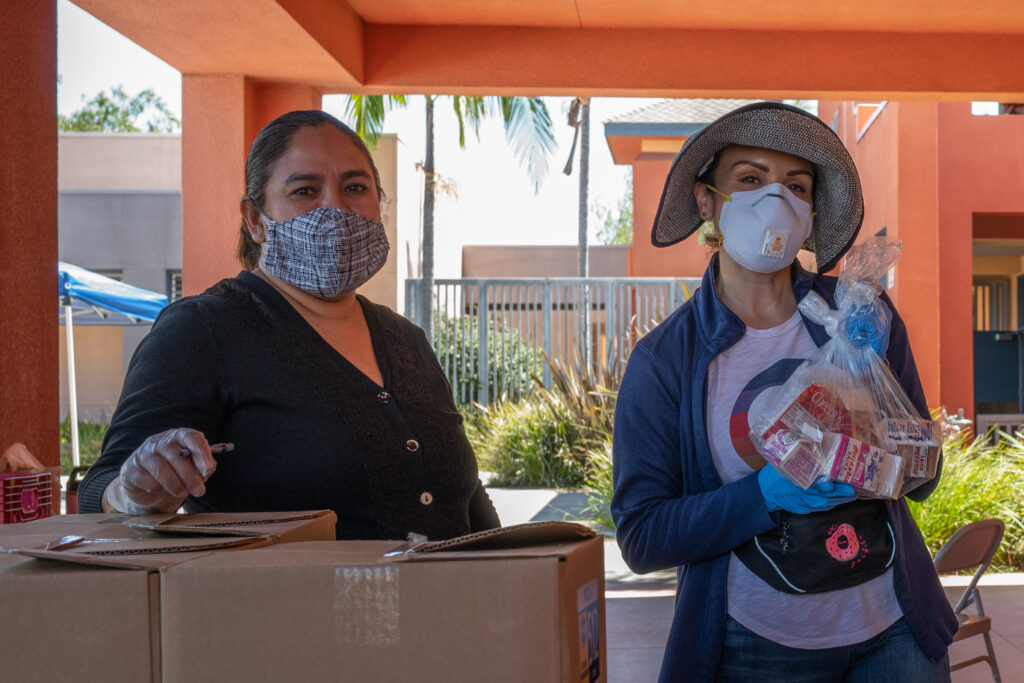 My wife and I learned about the project, by chance, on April 16, 2020, when walking by Garfield. A hand-made “Free Lunches for Kids” sign beckoned , and I decided to stop and document the moment with Leica Q2. The giveaway program was still relatively recently started, which might explain why no one waited to get the goods that some families desperately would want. Our daughter is an adult; Annie and I are semi-retired. We were not the people who should be accepting anything.

But on this day, we were offered a substantial amount of food. The stuff would spoil, if not used—maybe even be discarded, for fear of contagion, which was reinforced by state and county rules about sanitation and disinfection. Annie and I decided to take the box of offered grub, because we had neighbors in mind. Many kids live on our street, and their parents likely didn’t know about the free breakfasts and lunches. At my request, two volunteers posed for the Featured Image. Vitals, aperture manually set: f/5.6, ISO 250, 1/125 sec, 28mm; 11:49 a.m. PDT. Then we rushed off, because some items were perishable.

I had even less success giving away the food than the ladies at Garfield. Granted, early in the lockdown, suspicion of contaminated anything rapped the public consciousness, which partly explains why the parents with kids whom I approached politely said “No thank-you”. So I carried home the unexpected bounty, which was too much for some families and not enough for others—if for no other reason than they didn’t know they could get it or they lacked ability to get to it.

My mom raised four kids by herself. She was the stereotypical single mother who provided as much as she could for her children, but money was always tight. I remember many hungry days where free school lunch was the best, if not the only, meal of the day. So I understand why the generous giveaway and what it can mean to families with working parents suddenly made jobless.

Disappointed as I was being unable to share with my neighbors two months ago—something understandable at the pandemic’s height—today seeing stuff discarded unopened and edible really disheartened me. There are homeless people rummaging the alleys to dig in trash bins for spoiled scraps. Surely someone would want what was tossed aside but safer to eat. I left the stuff hoping a needy passerby would find it—that inconceivably there was purpose to the apparent waste.