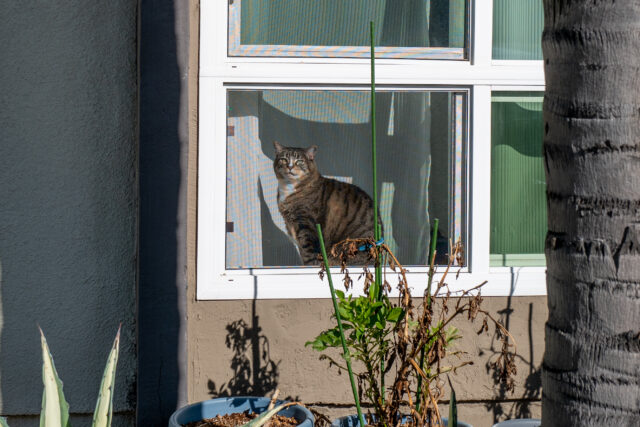 The series‘ twenty-first honorary member lives beyond the neighborhood, East of Texas Street into the nebulous zone where Normal Heights and North Park meet. I don’t recall whether this fine feline was seen on parallel streets Meade, Madison, or Monroe but for sure somewhere before 30th. 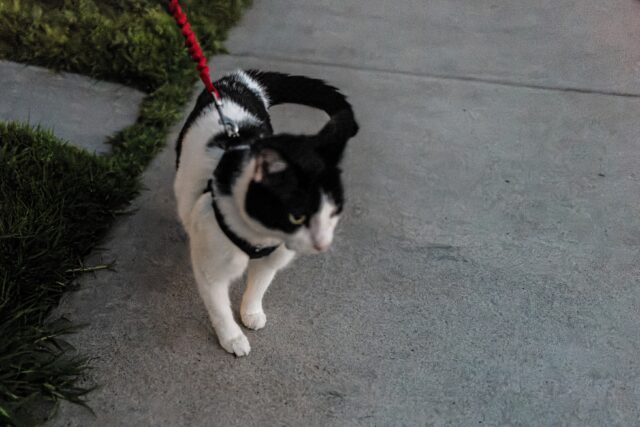 The Featured Image and companion are products of massive post-processing, starting with DxO PureRAW 2 auto-rendering and ending with my manual tweaking done in Adobe Photoshop Lightroom. Sunset was more than 20 minutes before I met Scorpius being walked by his owner, on March 23, 2022. Deep dusk had set in, and the darkness challenged even Leica Q2.

Vitals are same for both photos, aperture and shutter speed manually set: f/1.7, ISO 25000, 1/250 sec, 28mm; 7:25 p.m. PST. I held back adding this fine feline to the series, hoping for another encounter. But that seems unlikely 10 months later. I wouldn’t share the portraits had not PureRAW 2 restored them so admirably. That said, blurriness remains. I did try remini.ai unblur web app, which instead increased fuzziness. 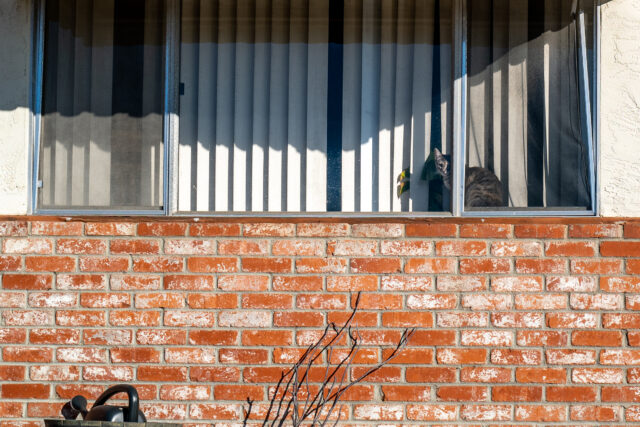 For reasons I won’t even guess, Mississippi isn’t a street where many felines are seen. The series‘ exceptions are notable, like Kittens, Kitty, or Sylvester. On Dec. 9, 2022, I saw one peeking (hence, the nickname) before blinds; single sighting. 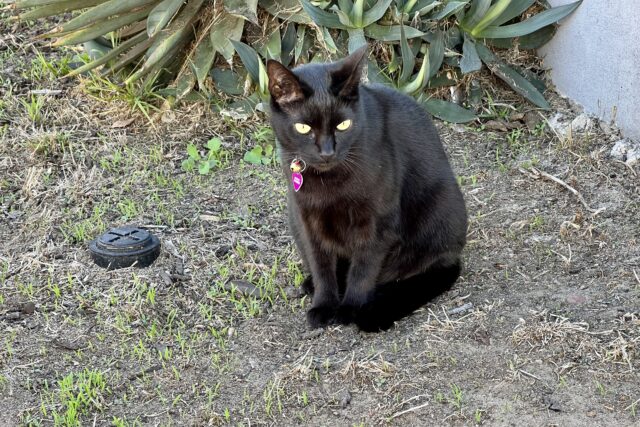 How strange that for years, our honorary contingent stayed single digits. But within the span of six months or so, the number unexpectedly jumped to—with today’s addition—twenty. I believe predators are the reason. University Heights hugs several canyons, where live coyotes; sightings are now frequently reported, as are the increasing number of missing kitties. I see fewer felines than what should be typical.

But beyond the boundary at Texas Street, canyons are more distant and the risk—but by no means absent, as the loss of Queenie so shows. Expect to see at least two more members join this special category sometime soon. The others, so far: Boo, Buddies, Chill, Coal, Comber, Envy, Fancy, Guapo, Lonesome, Jade, Mona, Moophie, Ninja, Promise, Queenie, Sammy, Shakey, Tom and Jerry, and Tula. 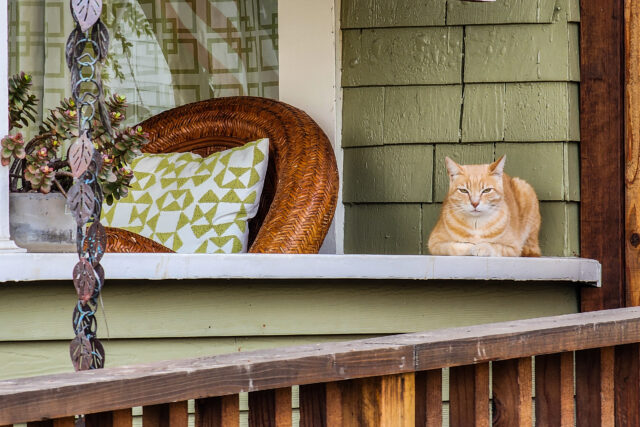 The sixth kitty seen in adjacent yards doesn’t look anything like the others—all of which are various markings of black on white:  Destiny, Pawky, Scamp, and Thin and Slim. I spotted the ginger on Dec. 29, 2022—for the second instance in several days at the same spot.

At the first sighting, I assumed the fine feline to be another, similarly colored cat that lives within a couple of blocks. But two times, in the same place, and front door of the home wide open convinced me that the putty-tat rests where he belongs. 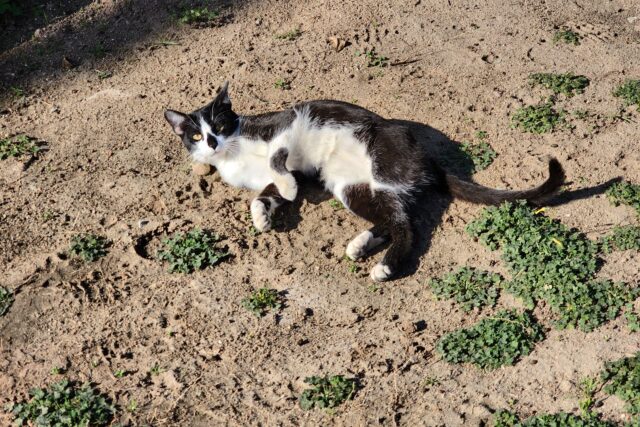 How strange that I forgot to make one of our fine felines the big post for New Year’s Day. I had done so starting in 2017 through 2022. As an apology, of sorts, I present kitties on consecutive days—and this one is fifth of six seen in one of two (or both) adjacent properties. 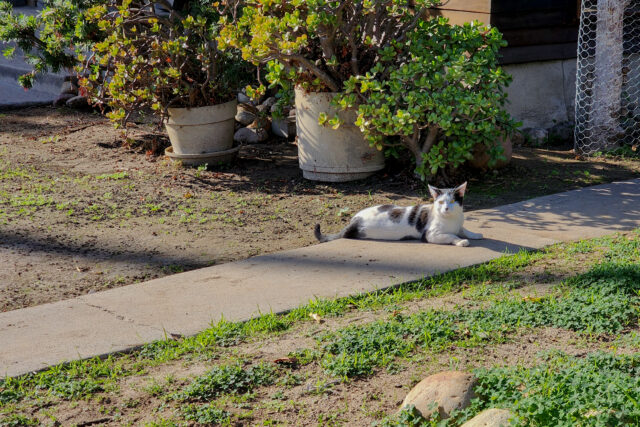 I have yet to identity the street where on adjacent properties several kitties recently made appearances. You already met half of the brood: Scamp and Thin and Slim. Three more wait in the queue, including today’s newest inductee to the series. For the protection of the animals and privacy of their owner(s), I will withhold the location.

My guess: Five of the six are blood relatives and four from the same litter. Based on size and slower trot, this fine feline—who earns nickname Destiny, for no particular reason—could be the momma. 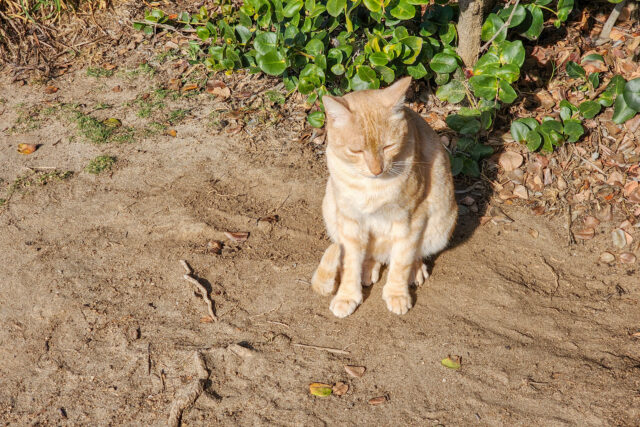 For the first Christmas in years, our daughter wasn’t in crisis. She started living in a woman’s group house and finally appeared on an upward trajectory. To celebrate her progress, my wife and I prepared a lovely assortment of meaningful gifts, which we dropped off before continuing on to the ocean and one of our more memorable holidays since the last decade. Then, unexpectedly, daughter left the residence and program on her 28th day—not thirty or the recommended sixty. Another year ends in uncertainty, with devastating foreshadowing.

Trying to revive some good feeling from Christmas Day, I present a most remarkable ginger kitty seen during our Pacific Beach adventure. He hunched in the sand alongside the paved path, mostly unfettered by bikers, runners, skaters, and walkers whizzing by. 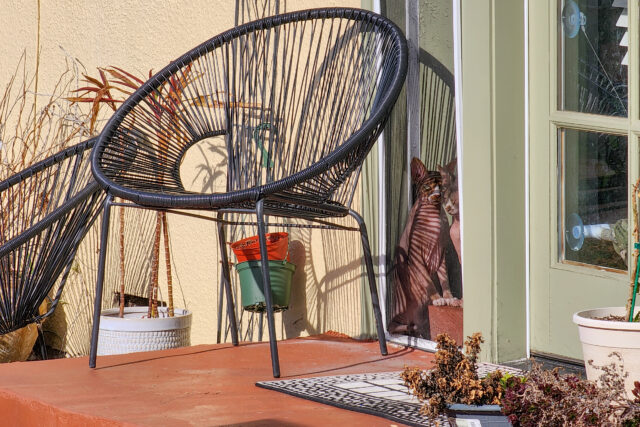 After celebrating what would turn out to be the last Christmas with my father-in-law (2016), I walked down Campus Ave. from his apartment towards the elementary school. There I encountered four kitties—Comet, Herman, Roman, and Willow—romping around supervised by their owner. JoAnn had lived in the same studio apartment for 19 years—10 of them with Roman. Neither of us could guess that months later, in early 2017, she and her brood would be compelled to move.

The property’s management executed what I unaffectionately call a renoviciton. Tenants vacated because of renovation that would later impose rent increases. Fast forward six years to Dec. 25, 2022. As my wife and I passed by the same rental complex, one of us spied a cat smushed against the screen of a vertically-long window positioned by the door of the same apartment. Yes, where JoAnn and her four felines once called home. 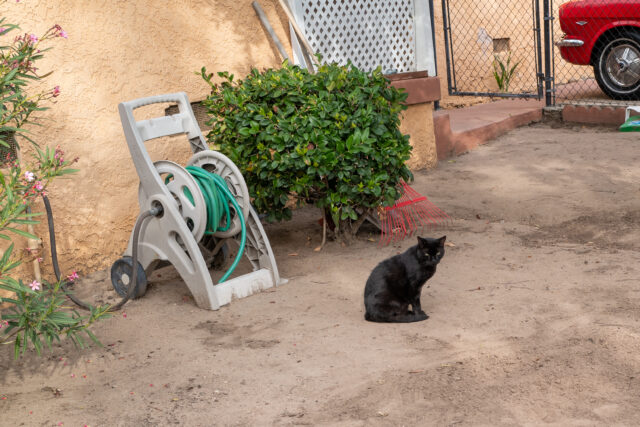 Meet Tula, as she is called by her owner, who tried to name her Tulip. You can see how that worked out. I had seen the kitty a few times during the past few months […] 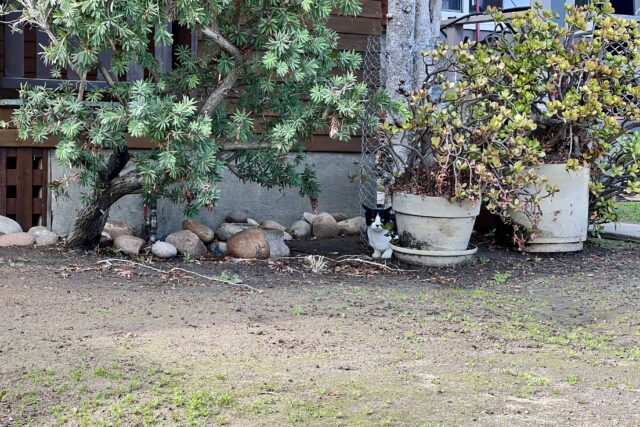 In the same yard where I first saw Thin and Slim, another black and white kitty appeared on Dec. 15, 2022. The trio are quite possibly from the same litter. However, this one was skittish rather than friendly. But, hey, doesn’t sibling personality often vary—vastly sometimes—even among humans? 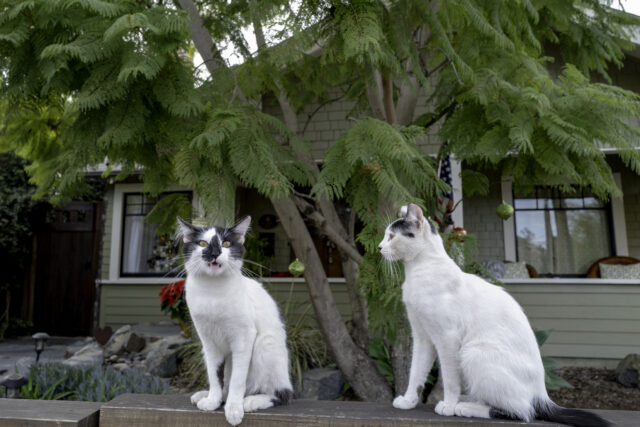 I had hoped to get the real names of these two fine felines but must move along their sharing, because the Featured Image has nagged since Dec. 16, 2022 to share it.