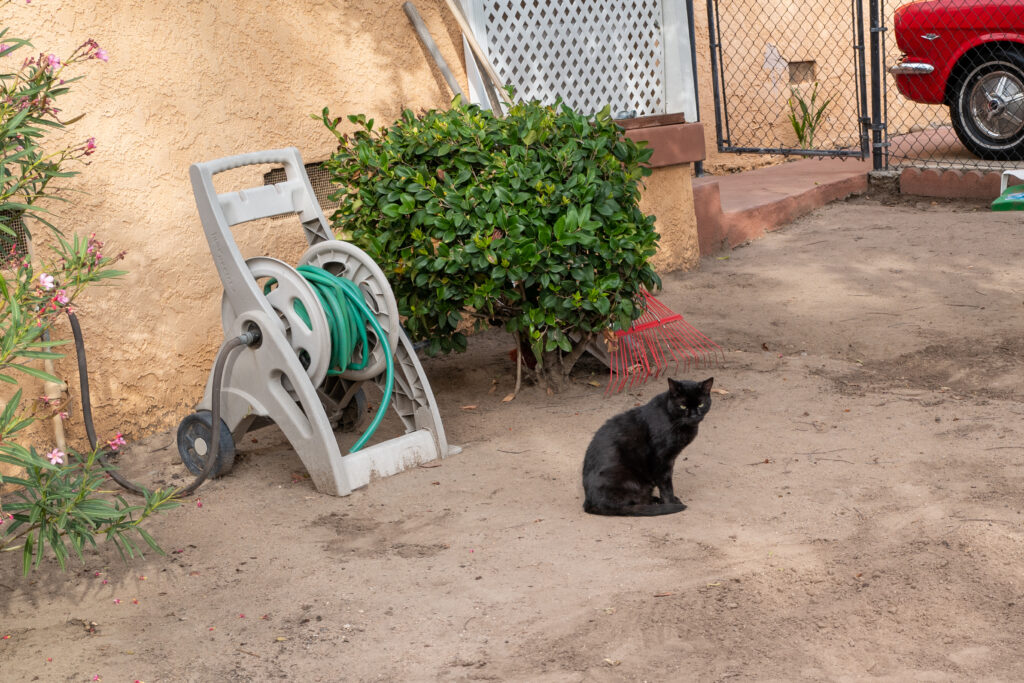 Meet Tula, as she is called by her owner, who tried to name her Tulip. You can see how that worked out. I had seen the kitty a few times during the past few months and shot the Featured Image on Nov. 17, 2022. But I didn’t meet Tula’s sweet caretaker until today.

Approximately age 11, Tula was a feral fed and looked after for her first six years around the residence. Over the course of another 12 months, her kind benefactor won the cat’s trust. Tula no longer lives exclusively outside. The home has a small front yard, where she stays sometimes. A cat door on the side gate lets her go into the back area.

With a sigh and sad tone, Tula’s owner says that she is unwell. It’s my observation that street cats which survive cars and coyotes ail in their early teens. San Diego weather may not seem harsh to some but the searing Southern sun wears away anything (or should I say everything). Constant construction and the subsequent toxins flung into ground level air is bad for everyone. Territorial catfights and the insane number of out-of-control dogs are among the other dangers and outright daily hardships that ferals, or any other outdoor kitties, must endure.

Tula lives a few blocks beyond the neighborhood’s official boundary. She joins seventeen others—out of 521 profiles in the series, since its start in October 2016. They are: Boo, Buddies, Chill, Coal, Envy, Fancy, Guapo, Lonesome, Jade, Mona, Moophie, Ninja, Promise, Queenie, Sammy, Shakey, and Tom and Jerry. Darth Mew initially belonged to the group, until later turning up in University Heights.