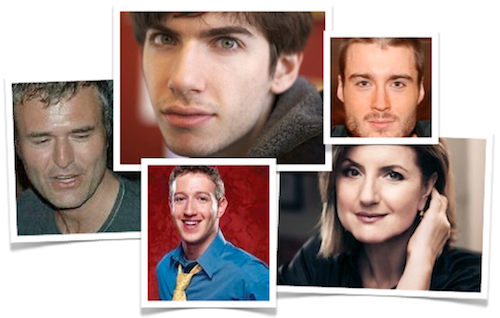 New media—and social media, for that matter—share something in common with old media moguls: Personality, as in the persons so acutely identified with the organizations. The brands are big, but often no bigger than the people behind them.Ten examples:

Some people will question why Rupert Murdoch and Steve Jobs make my list. Rupert was new media before there officially was new media. From satellite TV networks  to MySpace to iPad—each representing a different era of new media—Rupert pushed past the bleeding edge. Wall Street Journal is a much better newspaper since he bought it. Presentation and reporting are better today than three years ago. It’s a more new media organization, too.

So what about Steve Jobs? From iPod to iPhone to iPad, content is king, much of it not traditionally consumed. The iPad is all about content consumption. It’s oh-so new media. Apple also exercises editorial control over applications, including those for publications, and eBooks submitted to the iTunes App Store.

Publishing, radio and television have long been about people. There are reasons why magazines frequently put a person on the cover: People relate to people. It’s not really rocket science. People are interested in other people. It’s all the better for a brand when identified with a strong personality.

Social media has produced its stars; some, like Justin Bieber, moved from the new (YouTube) to the old (music label and big media marketing). Others, like Chatroulette founder Andrey Ternovskiy, create fresh new media outlets.

Something else about personality-driven new media organizations: They defy popular conventions about the importance of collaboration or, to a much lesser extent, crowdsourcing. Successful companies or projects (think James Cameron with movies Avatar and Titanic) tend to be led by a single strong personality—the visionary with a brave idea. There may be a team working with or under the personality, but the vision comes from the one person. Social media may raise up these personalities, but it’s my observation that group think is a fallacy.

Who else should be on this new personality list? You tell me.

Do you have a story about new media that you’d like told? Please email Joe Wilcox: joewilcox at gmail dot com.