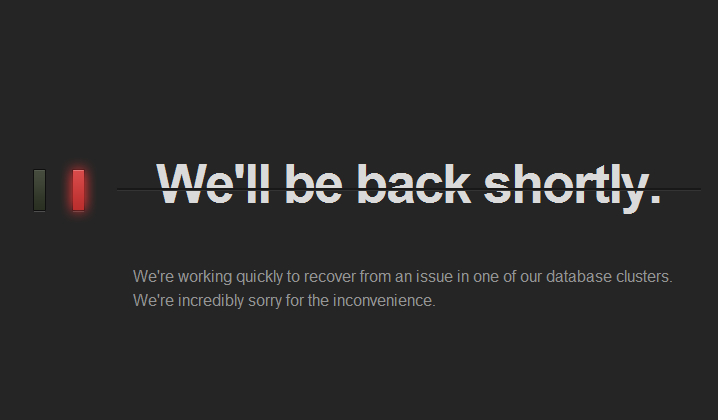 It only seems like I’m kicking Tumblr when it’s down, quite literally. But I’ve been planning to write about giving up Tumblr for some time. The microblog’s service outage, now going on for more than 17 hours as I write, is just the news hook. TechCrunch gets my headline of the week award, partly stated: “Tumblr Redefines The Concept Of ‘Back Shortly‘”. I’ll say. TechCrunch is a WordPress.com VIP; not Tumblr.

Yes, I Love Tumblr
I’ll continue by saying that I’m a big Tumblr fan, even while acting traitor, because:

But Tumblr Doesn’t Love Me
I signed up for Tumblr in April 2008. For a time, joewilcox.com was hosted there, but more recently oddlytogether.com. I had planned to make Oddly Together my main blog, with focus on storytelling. I retired joewilcox.com in October 2009. However, over the following 11 months, I grew dissatisfied with Tumblr—and not for dislike. I am enamored by the publishing platform’s ease and convenience and its hip and connected community of bloggers. In September 2010, I brought back joewilcox.com, on hosted WordPress, and in November put Oddly Together on hiatus. I will eventually relaunch the blog, quite likely elsewhere. My problems with Tumblr:

[yellow_box]1. The community is changing from the creative to the crass and just plain ass.[/yellow_box]

[green_box]2. Tumblr is also being overrun by big media, something the service encourages.[/green_box]

In July, Tumblr announced the hiring of Mark Coatney, who launched a Newsweek microblog on the service. He’s charged with helping traditional media companies set up Tumblrs. In August, I asserted that “Old Media Should Pay Up If It Wants to Tumblr“. It’s my strong assertion that media companies should pay; no free rides. Old Media also is changing Tumblr’s voice—tone, if you prefer—away from independently produced content. That content will be harder to find, as more media companies invade Tumblr.

[blue_box]3. I mostly produce original content, rather than reblog someone else’s.[/blue_box]

So one of Tumblr’s major community-oriented features doesn’t work for me. Reblogging is a major character of the Tumblr community and culture, and I don’t participate. That makes me somewhat of an outcast.

[red_box]4. Most of my original content is what print publishers call “evergreen”.[/red_box]

It’s not bound to events or something happening now that means little in a few weeks or months. Many of my posts are relevant years later. Tumblr demands that posts be in a timeline stream. For example, when migrating content from the old joewilcox.com to Oddly Together, posts dated years earlier would still appear in the current stream. I see no way to easily expose older content, either from the Tumblr platform or number of free or premium fee themes. This problem clinched my decision to abandon Tumblr.

The microblogging motif may be catching on in a big way, but it’s already outdated. What people want is more ability to mash up content. The stream of photos, videos, quotes, links and text posts is too limiting. Millennials are leading the mashup/remix revolution. Tumblr is moving two steps behind (although I concede reblogging is very mashup/remix oriented). Interestingly, the Facebook redesign launched today is more mashup, even though content remains separated by type.

Meet the Mashup/Remix Revolution
The other part of that TechCrunch headline is “Victim Of its Own Success”, which succinctly states my fundamental problems with Tumblr. Success is changing the community. Success is overwhelming the service, which is godawful slow at times. Success is changing Tumblr service and features priorities and possibly slowing down the launch of paid enhancements. I’d feel better about Tumblr if I paid for additional features that allowed me to remix more content.

WordPress 3.x and a theme supporting its new features allow me more ability to mashup content types and from different times. The theme I currently use easily lets me bring to the surface content written long ago. For example, my 2005 post “Remembering Lennon” is still appropriate recollection of the former Beatle’s murder, which was 30 years ago on December 8. As I write, that post is linkable from a large banner across the “Five Minutes with Joe” home page. I also can more easily mix up different types of content, which frequency will increase as I add more audio and video stuff.

But what I lose is the easy-access to community, something Tumblr offers, as does WordPress.com. I’m miffed at Automattic for not offering a paid upgrade allowing custom themes at WordPress.com (sorry CSS editing isn’t good enough). WordPress.com has a wonderful community, which I would participate in if there was suitable option. Sigh. It’s lonely out here in self-hosted land.

Do you have a blogging story that you’d like told? Please email Joe Wilcox: joewilcox at gmail dot com.