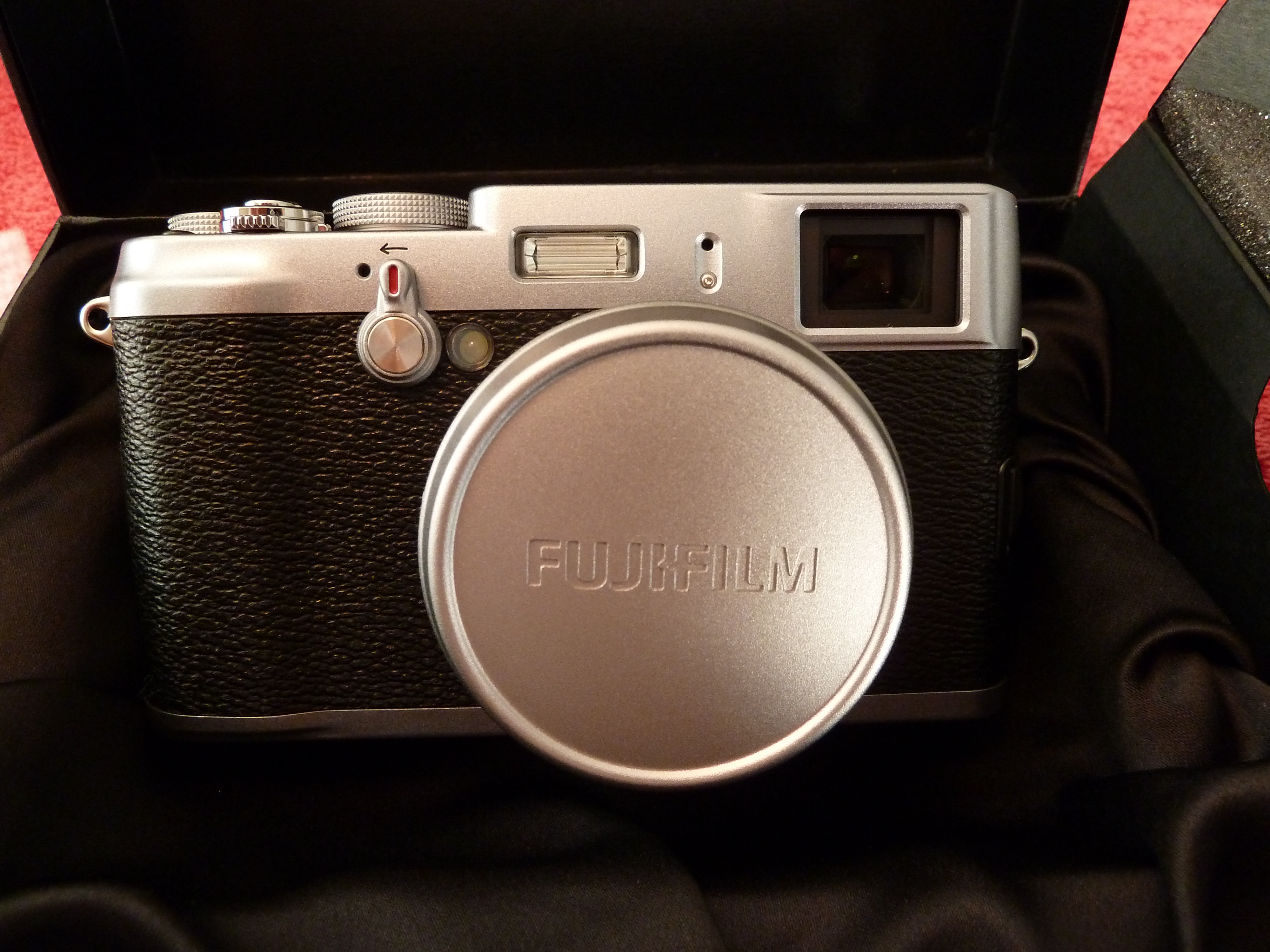 Few digital cameras have caused as much stir as the retro-styled compact now available in the United States on a limited basis. The Fujifilm FinePix X100 joins the Leica X1, Sigma DP1x and DP2x, Sony Alpha NEX-3 and NEX-5, and micro four-thirds cameras like the Olympus PEN E-PL2 and E-P2 or Panasonic DMC-GF2 in a newer class of mirrorless digicams. I used or owned the DP1, DP2s, E-P2, GF1, and X1.

However, like the Leica X1 or Sigma DP series, the X100 is eccentric—the lens is fixed and cannot be changed. Who on earth would buy a digital camera without telephoto? I, for one. Many professional photographers for another. I’m no pro, but I have specific needs as a journalist for which the X100 is ideally suited. The Fuji is the only camera I own. Whether or not it will be sufficient for my needs, or possibly yours, is question answered by continuous use. For now, I offer my first impressions and explain what are this camera’s major benefits.

Most certainly the X100 isn’t for everyone. The fixed, 35mm film equivalent lens (23mm digital) won’t appeal to anyone wanting to change lenses or to zoom in and out. With the FinePix X100, you are the telephoto. The $1,199.95 price will put off other people. For even less, $879.99, Costco sells the Nikon D3100 dSLR, with two zoom lenses, two training DVDs, and 4GB storage card. Additionally, there aren’t loads of scene modes that appropriately adjust the settings. Fujifilm provides the tools, you have to use them. This camera can produce exceptional photos, particularly in low light, but they won’t come from shooting in auto mode.

Top-Line Benefits
1. Retro design. Simply stated, this is one handsome camera that harkens back to 1950’s-era rangefinders. But looks are deceiving. The X100 is no rangefinder, and it has new, and innovative tech, inside. “The joke is that you know you are carrying the very latest, cutting-edge, $1,200 semiprofessional camera, but passers-by think you’re the last Luddite film buff in America”, David Pogue writes in his X100 review for the New York Times.

2. Hybrid viewfinder. While the X100 has the typical LCD screen on the back, photographers are more likely to use it to view rather than to take photos. The X100’s hybrid electronic/optical viewfinder is a marvel of innovation. Photographers can switch between both views, which offer simply shocking advantages for framing—that is composing—the picture. Photographer Sean Reid better explains in his X100 review. It’s worth paying the 33 bucks a year for the one review, if you’re considering buying the X100 (His content is all behind a paywall). You never heard of Sean Reid? Here’s why.

3. APS-C sensor. Like the Leica X1 and Sony NEX series, the X100 packs a full dSLR-size sensor into a compact-size. However, this isn’t as big as the full-frame sensor (35mm equivalent) found on Leica rangefinders or the Canon EOS 5D Mark II. The X100 sensor measures 23.6mm x 15.8mm. By comparison, the hefty Canon 7D dSLR’s sensor is slightly smaller—22.3 x 14.9 mm. The X100 sensor produces 12.3-megapixel images, which is more than most anyone should ever need.

4. Fixed, f/2 lens. I’m a big fan of prime lenses, and you should be, too. A good fixed-lens will produce sharper images with less distortion than any telephoto. Based on the photo pros’ reviews, like this one from Steve Huff, and my less than 48 hours with the X100, Fuji’s lens delivers—and it lets in a whole lot of light for people like me who don’t often use flash.

6. Flash sync. The X100 can flash sync to a shutter speed of 1/4000 sec. That’s not just unheard of for compacts but for most digital SLRs—1/125 sec is more typical. Even the haughty Canon EOS 5D Mark II is 1/200 sec flash sync. I personally prefer to shoot without flash, but for those people who do, this is an outstanding capability to have—and marvelously unique.

7. High ISO. The X100 produces stunning images, even as high as ISO 6400. If you’re an indoor shooter—and I am when covering tech events—the high-ISO capability means capturing better photos without a flash. That makes the X100 more discreet and less intrusive, too. For some examples of high-ISO performance, visit the FinePix X100 Flickr group.

8. Silent shutter. The X100’s four-leaf shutter is essentially silent, and I had found the Leica X1 and Sigma DP2s to be unbelievably quiet. Combined with the camera’s compact size and unobtrusive lens, the X100 is a discreet shooter, which makes it highly suited to street photography (other than “zone focus” issues pro reviewers observe). For a sweet taste, visit the Fuji X100 Street Photography Flickr group.

9. External controls. Like with the Leica X1, but placed differently, the photographer uses dedicated dials to change aperture and shutter speed—no fiddling with backside controls required.

10. Fuji color. Some photographers rave about the “Leica look” or “Foveon look” (for Sigma cameras). The “Fuji look” is very much about the warm colors and deep contrast the X100 produces. Photos are smoother than sharp in my early testing—at least compared to the Leica X1—but satisfying.

How I Got Mine
The Fujifilm FinePix X100 is a tough camera to come by. Fuji announced the digicam in September and pricing in February. I put in a preorder with Amazon right away. I chose Amazon because I sold some stuff to a good friend to help fund the purchase, and he wanted to pay by credit card. It was easier for him to send an Amazon gift certificate (I didn’t want PayPal fees, nixing the other option). This gave me about $750 towards the X100 if purchased from Amazon or one of its merchants.

Demand looked to be high, then the devastating earthquake and tsunami struck Japan, stopping X100 production for several weeks. Suddenly everyone wanted a X100, and few people could get it. But then, unexpectedly, the logjam lifted ever so slightly last week. U.S. dealers started shipping the first X100 preorders on April 29. Meanwhile, Amazon was silent about the status of my preorder.

On May 2, around 1:30 p.m. ET, a new merchant carrying the X100 popped up on Amazon selling the camera for a few hundred bucks over list price. The merchant turned out to be a reputable photo shop, and I called to confirm cameras were indeed in stock. “What the hell?” I thought. I cancelled my Amazon order to free up the gift card balance. During the two minutes that passed, the merchant sold out. So not only could I not buy the X100 immediately but I lost my place in the Amazon preorder queue. 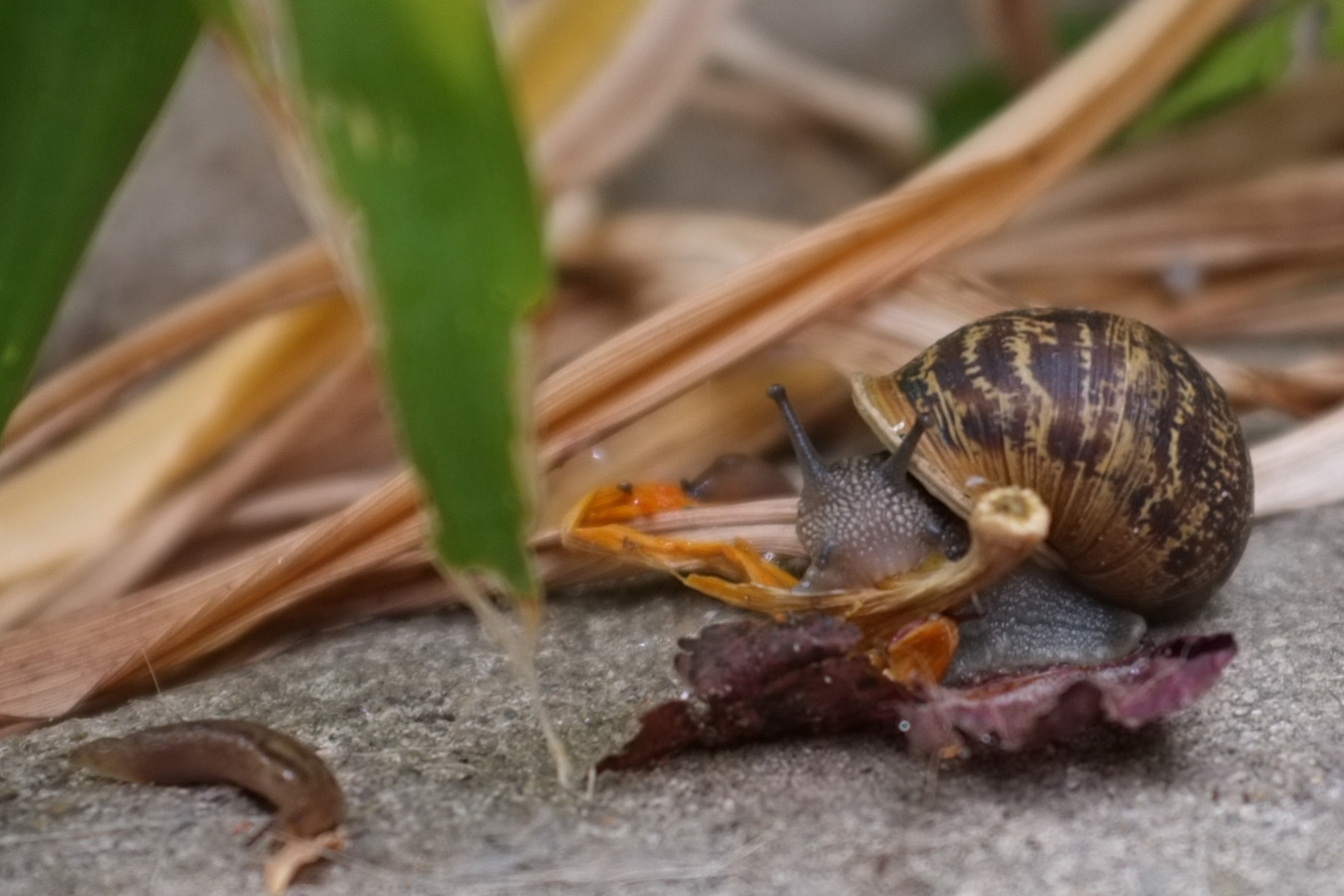 For no reason other than solace, I kept the Amazon X100 product page open all day in a browser tab. I occasionally returned looking for some miracle availability and to scold myself for being impatient. Around 11:20 p.m. ET, after reading Steve Huff’s first-impressions review and going somewhere else, I clicked the X100 product page tab by mistake. Before my eyes appeared the camera, listed as “in stock” with Amazon and two one-click buying buttons at the top of the page—for next-day and two-day delivery. I immediately clicked the next-day button (available to Prime members). No more than 90 seconds later, I returned to the product page, where the X100 was listed as no longer available from Amazon.

I received order confirmation at 11:24 p.m. with delivery estimate of May 6. Amazon later revised delivery to May 5 and then to May 4, which is when UPS made late-day delivery. I’m simply stunned.

In an interesting aside, Steve Huff posted at 11:22 p.m. (not sure his time zone) on May 3: “Amazon sold 19 X100s last night at this time in about an hour” and another 13 about the same day he posted. I must have been one of the lucky 19, although, given the odds, winning the lottery would have pleased me more. If you’re shopping Amazon for the X100, 11 p.m. ET might be a good time of day to stake out the product page. Maybe you can get lucky, too.

Regarding the camera, my first impressions are hugely positive, although I am surprised by the X100’s heft. I will post photos taken with the camera a this Flickr set, where you can find some first pics of the camera using my wife’s compact—Panasonic Lumix DMC-ZS7.