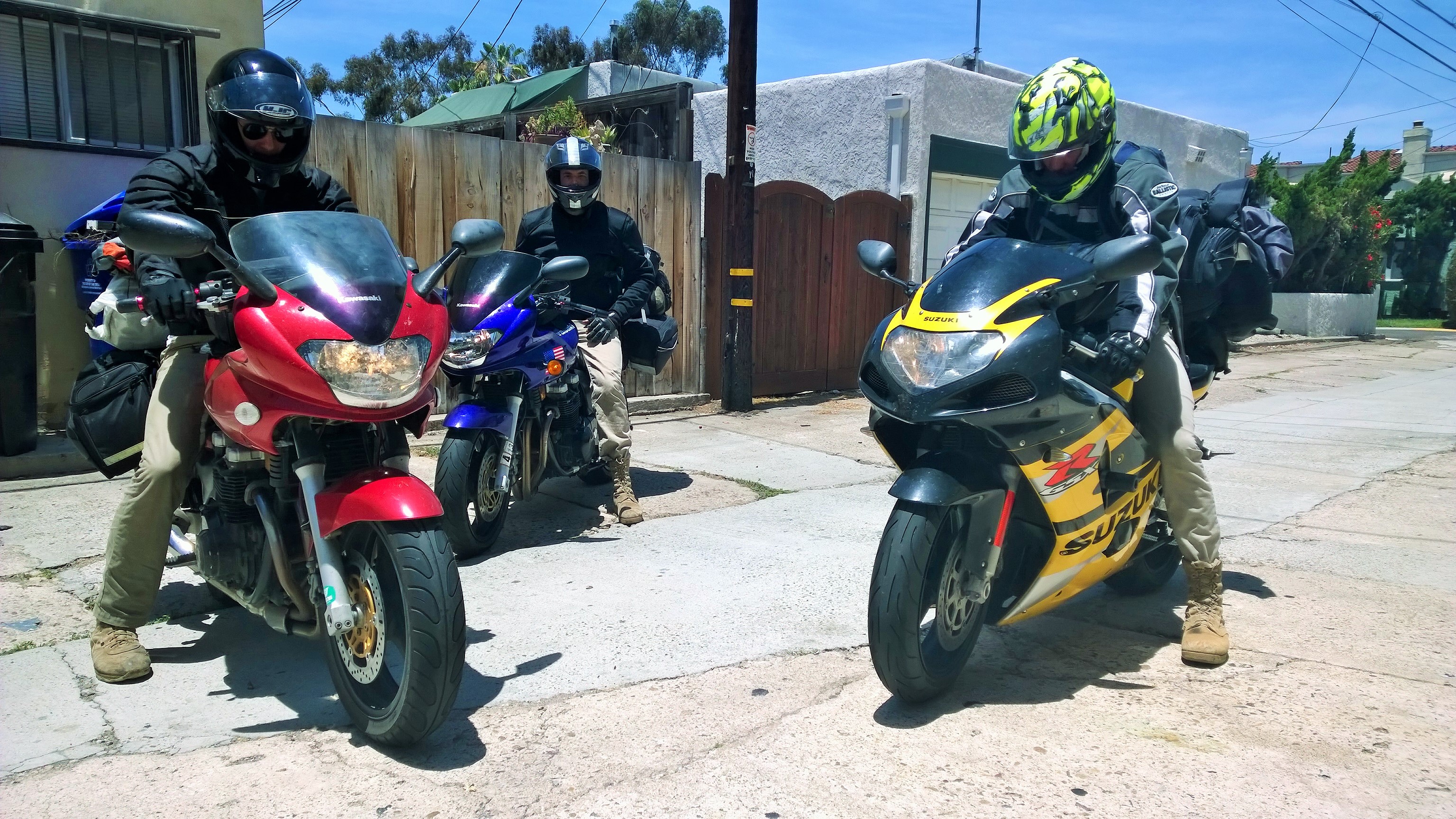 I can’t express how much we enjoyed hosting Richard Abendroth, Andreas Hochmuth, and Jake Mas. The young men, all in their earlier twenties, motorcycled across the country, from Maryland to California. They left here yesterday heading up the coast, with an eventual destination of Seattle before traveling back East.

These are fine young men, whose comradery and energy inspire me. Jake’s description of the three huddled together under the rocks at La Jolla Cove watching the sun set over the Pacific for the first time was evocative. “Friends forever” is more than a cliché. It is a living vital force as demonstrated by the travelers’ familiarity and trust.

Sitting on the floor in our living room, Andreas pulled off his shirt exposing his back so that Richard could apply sunblock. The young Hochmuth is quite muscular, and bare chests are commonly seen here in San Diego. But the context differs. Our neighborhood borders the gay community of Hillcrest. I am accustomed to seeing men touch one another, but not as friends. There is another meaning to the intimacy.

Friendship is first and foremost about trust, knowing that your buddy always has your back. There also is familiarity and dependence. Parents will always love you. But friends understand you. This trip will further bind their friendship and make memories they will carry their lifetimes. I encourage them to stay the course.

But they may not. I saw some conflict among the travelers as they prepared to leave San Diego. Back East, Richard left behind a father who is ill and brother who slowly recovers from serious injury while riding his bicycle. Surely, this expedition, with four-week time horizon, wasn’t easily started, and Richard carries burden which weight increases with each mile and minute separating him from family. He is pulled between his love and obligations to both parties. To continue and to return sooner.

The journey matters more, I say. Richard—all three men—ride not just for themselves but for all the people they love who can’t, and may never be able to, make such a journey. By chronicling the trip on Facebook, Andreas, Jake, and Richard let family and other friends vicariously participate. In that sense, the trip is a gift to the people left behind. Stay the course, you men. Tell this traveling story to its end.

Friends forever. It is the story’s theme.

As the three mounted their bikes yesterday, I wanted to ask them to stay longer—to flop on their sleeping bags for one more day. Or another. But the journey beckons, and they must fill the destiny it lays before them. As they rode away, I choked back tears. They are sons who would make any parent proud, and as friends together each is the “Thousandth Man” from the Rudyard Kipling poem (text below).

One man in a thousand, Solomon says.
Will stick more close than a brother.
And it’s worth while seeking him half your days
If you find him before the other.
Nine hundred and ninety-nine depend
On what the world sees in you,
But the Thousandth Man will stand your friend
With the whole round world agin you.

‘Tis neither promise nor prayer nor show
Will settle the finding for ‘ee.
Nine hundred and ninety-nine of ’em go
By your looks, or your acts, or your glory.

But if he finds you and you find him,
The rest of the world don’t matter;
For the Thousandth Man will sink or swim
With you in any water.

You can use his purse with no more talk
Than he uses yours for his spendings,
And laugh and meet in your daily walk
As though there had been no lendings.

Nine hundred and ninety-nine of ’em call
For silver and gold in their dealings;
But the Thousandth Man he’s worth ’em all
Because you can show him your feelings.

His wrong’s your wrong, and his right’s your right,
In season or out of season.
Stand up and back it in all men’s sight
With that for your only reason!

Nine hundred and ninety-nine can’t bide
The shame or mocking or laughter,
But the Thousandth Man will stand by your side
To the gallows-foot—and after!