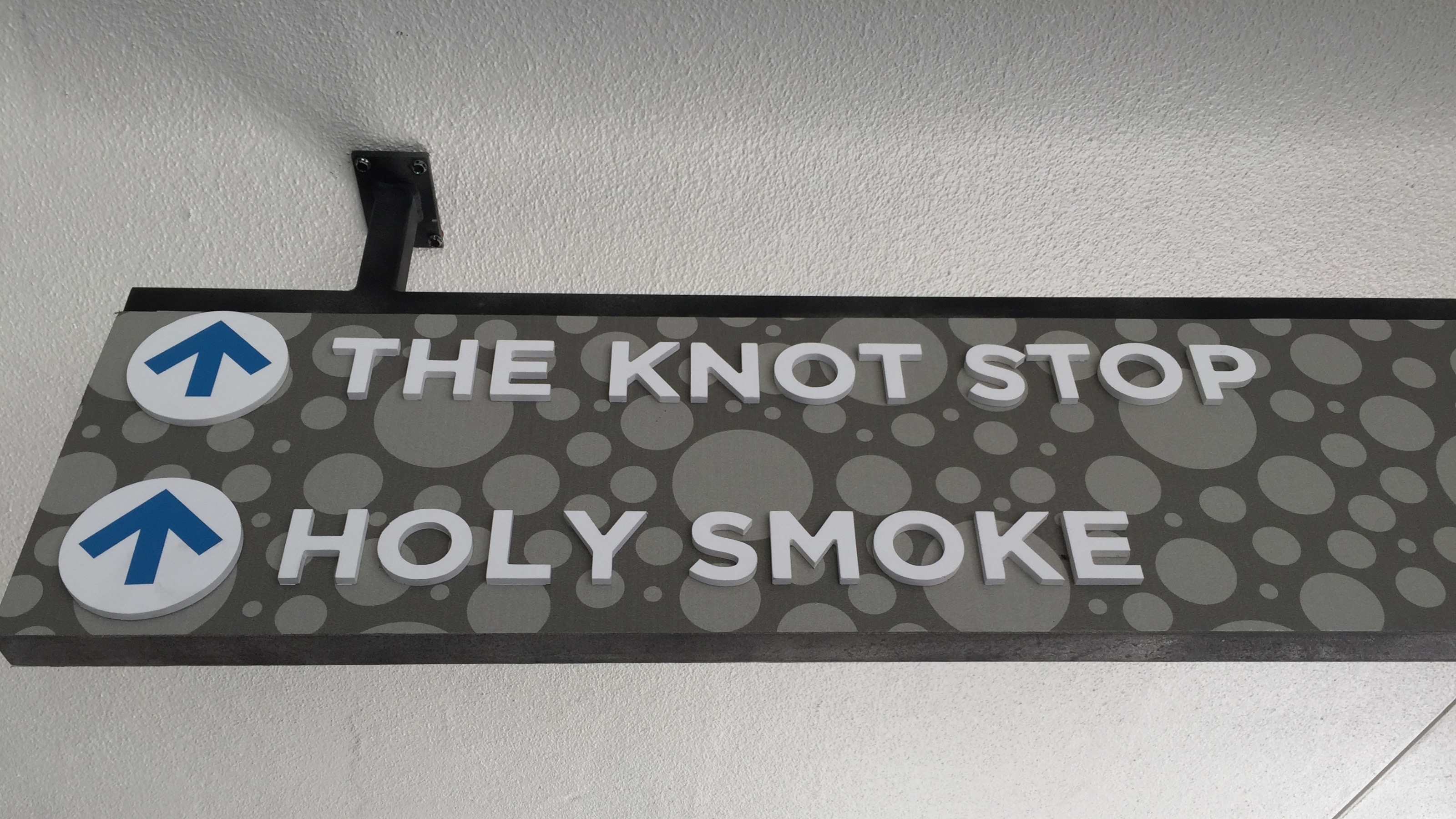 While sitting with my 93 year-old father-in-law outside the Starbucks in San Diego’s Hillcrest district, I observed a directional sign for two shops, today. Then I read them as a sentence and laughed. Okay, you—think like an imaginative kid and not a stuck-up-the-butt literal adult: Ignore the K. It’s funny, yes?

Strangely, I came to live the sign not long later. As we walked into Trader Joe’s, a neighbor said hello on her way inside. I politely introduced my father-n-law, then she started on about the Neighborhood Watch group that she recently organized. The first meeting went well, but she wasn’t sure how to contact me. That’s when I blew her holy smoke up her arse.

Maybe on a different day, I would have shown more tact. But I tire of kissing Californian butt, because speaking your mind is considered so offense by so many out here. Additionally, I am disgusted by the many who want to jail the few—so much that the jails are overcrowded. Perhaps if I hadn’t just last night finished reading the June 20, 2015 Economist with “Jailhouse Nation” cover, my tongue might have stilled. Might.

This one sentence says almost all that needs to be from the report: “With less than 5 percent of the world’s population, the United States holds roughly a quarter of its prisoners”. But why not punch it, eh? “At any one time, one American adult in 35 is in prison, on parole or on probation. A third of African-American men can expect to be locked up at some point, and one in nine black children has a parent behind bars”.

When my neighbor approached me about starting a Neighborhood Watch group weeks ago, I wondered: “What the frak?” We live in one of the safest areas of the city. There simply is no need. But she has an agenda—one of many that my journalist nose detects.

Today walking into Trader Joe’s, my tongue struck: “I don’t believe in your Neighborhood Watch”. “That’s too bad”, she said—then explained why. The local cops showed up to the first meeting and spotted some homeless folks picking bottles from recycle bins. San Diego’s finest had words with the redemption pickers, she proudly (and excitedly) stated. Because they aren’t supposed to rummage on “private property”.

I told her that’s exactly why I don’t support her Neighborhood Watch. I believe the homeless working to collect redeemable bottles and cans should be allowed to do so. She wants them out of the neighborhood—sentiment and objective unequivocally made clear when she proselytized her fear mongering committee to me weeks ago.

That private property of which she speaks would be alleys behind apartments and homes where residents keep their trash bins and recycle cans. I get cranky when some of the homeless go through garbage bags looking for redeemables, but I would never stop them. They work hard for their nickels.

We sometimes give out cans and, occasionally, cash to some of the regulars. The majority aren’t troublemakers. They’re just in a bad state of luck. There aren’t as many as a few years ago. People like my neighbor are one reason. California economy is another.

When a stereotypical, wealthy white organizes a Neighborhood Watch group in an area where none is needed, trouble can only follow. In a way, she is the truly imprisoned, if living in such fear, disgust, or whatever other appropriate descriptor your prefer. Spreading that fear causes discontent and distrust, eventually spreading suspicion that hurts everyone in the community.

People like that, blowing their holy smoke—seeing perfection in themselves reflected in the faults they find in others—makes me mad.