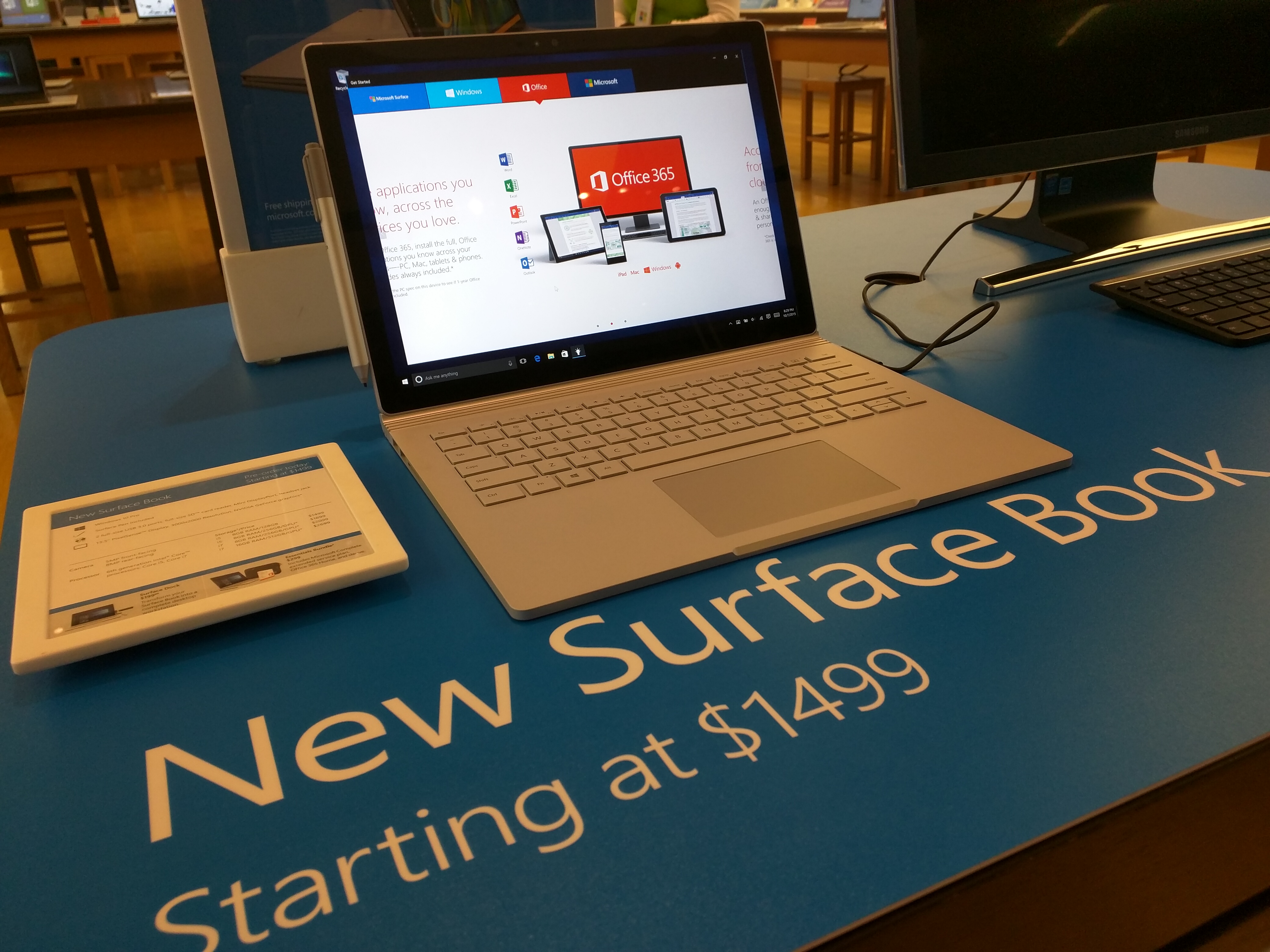 This evening, after watching “The Martin”, which is superb, I walked over to my local Microsoft Store. Surprise. Surprise. The day following the big Surface reveal, the new tablet and laptop are on display. Preorders are underway now, and the new gear goes on sale October 26, 2015 (hehe, my twin sisters’ birthday).

Got to say that more as a matter of preference and budget, my first impression favors Surface Pro 4. Top-end SKU available this month sells for $1,499, with 6th-gen Intel Core i5 processor, 16GB RAM, 256GB hard drive, and Intel HD graphics 520. The fanless m3 chip model, with paltry 4GB memory, marks the low-end at $899. Custom-configured i7 Surface Pro 4 will be available from November 20 and cost as much as $2,699.

The new Type Cover is excellent. Finally, Microsoft offers a respectable keyboard for those of us who write for a living. I am less impressed, on quick examination, with the Surface Book keyboard. The keys are surprisingly springy—no, wobbly. They are soft to touch and not noisy; both benefits. I could adjust easily enough, but the overall layout of keys and trackpad is too roomy for my taste.

The screen is magnificent. A store specialist streamed 4K video when I walked over. The color gambit caught my attention more than the detail. My eyes were pleased. Where Surface Pro 4 tops out on October 26th, Surface Book begins: $1,499, which gets the buyer 6th-cen Core i5 processor, 8GB memory, and 128GB storage. That’s a lean config for the money. The first preconfigured SKU with discreet nVidia graphics sells for $1,899. Storage doubles, but RAM is the same. I would want 16GB, but that’s $2,699 with Core i7 and 256GB drive.

Everything about Surface Book feels too large to me: The 13.5 screen, the enclosure, and the price. Apple MacBook Pro is a smidgen wider and weighs more, but Microsoft’s laptop feels larger to me because of the screen’s lovely 3:2 ratio and greater depth that creates too much space around the trackpad (expanse someone with larger hands would more likely appreciate). I have used 13-inch tablet-hybrids before and found them to be too large. Surface Pro 4 just falls short of being too large.

Again, preference is the keyword here. I will take more memory over faster processor, which favors Surface Pro 4 with 16GB. Both computers pack in 5MP front-facing cameras,which is another benefit but not one compelling choice of one over the other (which Apple does between MacBook and MBP.

I very much would want to test and review either new Surface. But I am prohibited. Microsoft gives out single loaners to each blog or newsite, which is sensible and pragmatic. I write for BetaNews, where the one writer living in New York and able to attend launch events gets the goods. Boys don’t share toys, I learned. That’s how I came to buy Surface Pro 3 to test during summer 2013.

Situation will change, but that’s topic for future post. Watch for it.