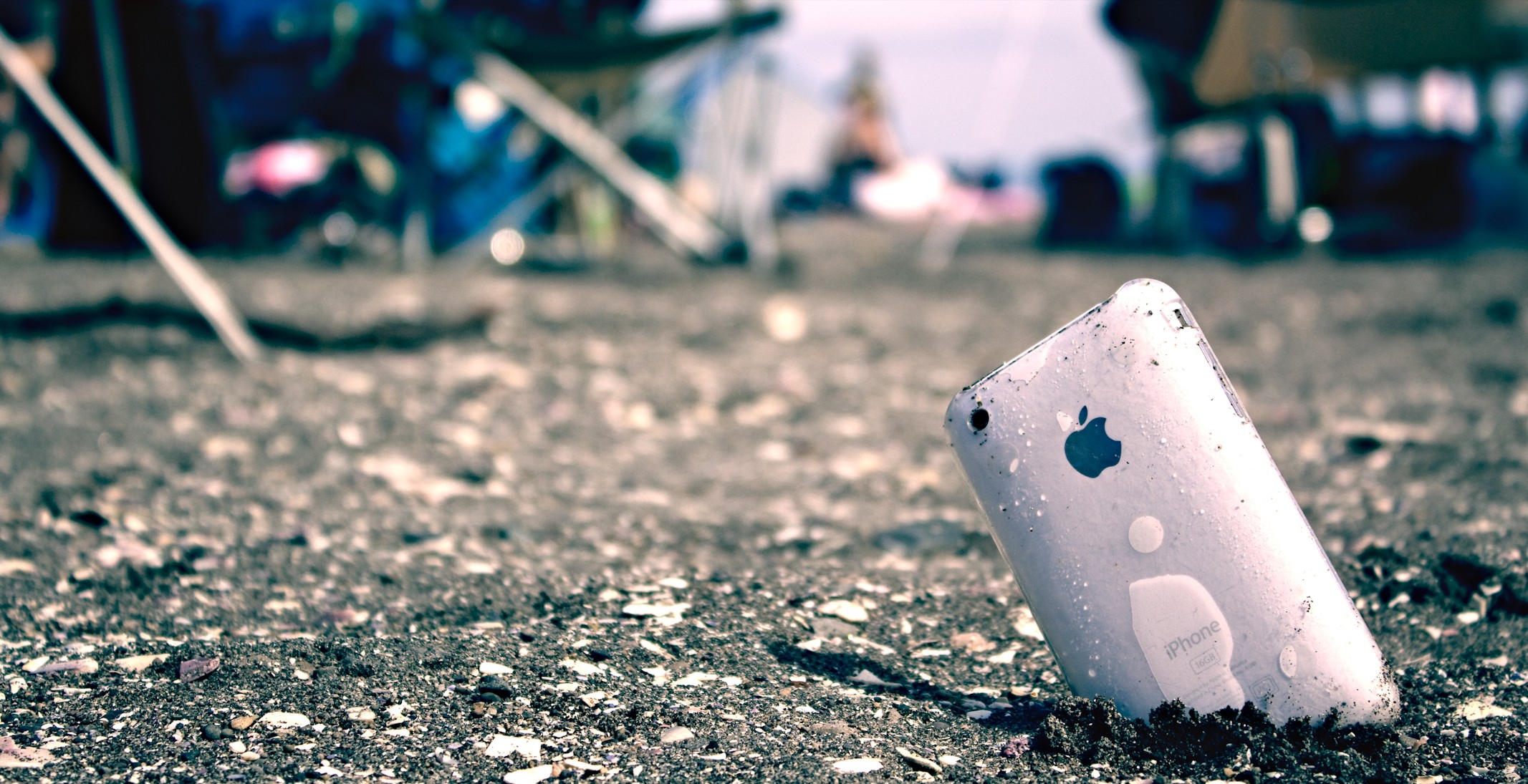 The spotlight shines on the world’s most-valuable company this fine Tuesday, as Apple revealed results for fiscal second quarter 2016. Wall Street expected the first revenue growth decline in more than a decade and iPhone’s first-ever sales retraction . Is the sky finally falling? Eh, not yet. But the sun slowly sets over the vast smartphone empire.

Ahead of today’s earnings announcement, Wall Street consensus put revenue down 10.4 percent year over year to $51.97 billion, with earnings per share down 14.2 percent to $2. Apple actual: $50.557 billion sales, $10.5 billion net income, and $1.90 EPS. Three months ago, the company told the Street to expect between $50 billion and $53 billion in sales. You read the numbers correctly: Apple uncharacteristically missed the Street’s targets and came in on the low end of its own guidance.

International sales represented 67 percent of revenue. Gross margin fell to 39.4 percent from 40.8 percent a year earlier. Looking ahead, Apple’s fiscal third-quiadance is $41 billion to $43 billion sales. which falls below Wall Street consensus of $47.3 billion and is a steeper year-over-year decline: 9 percent to 13 percent.

Some of the shortfall comes from $2 billion in inventory reduction, reflecting that the company expects to sell fewer iPhones during fiscal Q3. Declining average selling prices, spurred by iPhone SE, is another factor.

Shareholders punished Apple in after-hours trading, driving down the stock price by 8.5 percent.

From Cook’s perspective, the iPhone business is “healthy and strong”. Existing customers make up one of three buying segments. Using them as basis, early iPhone 6s sales exceed the 5s, he asserts. But shouldn’t they be, with a larger base of smartphone buyers?

Android switchers is another, and Cook claims more of them bought iPhones during the first six months of the fiscal year than any other comparable time period. First-time buyers are the other group, where the company expects to gain sales with its new, lower-selling smartphone. Cook says that Apple sees “very strong demand” for iPhone SE that exceeds supply.

Broadly, Apple’s dependence on iPhone cannot be overstated—as main revenue contributor and driver of so-called “halo sales” of other products; App Store, Apple Watch, Apple Music, iTunes, Macs, and more. During fiscal Q2, the handset accounted for 65 percent of revenues. Twelve months earlier: 69.4 percents. Anything that threatens to tip the iPhone—eh, Apple—cart poses great risk to the revenue stream, which could fall as quickly as it rose.

The company’s financial fortunes started surging with results reported for fiscal first quarter 2010, when an accounting change allowed the realization of previously deferred revenue. The adjustment contributed to the company beating Wall Street consensus by about $3.5 billion, with revenue of $15.68 billion and $3.38 billion net profit. iPhone accounted for 35.6 percent of revenues. The quarter was a pivotal turning point. Positive perceptions lifted Apple shares, improved the brand image, and increased iPhone sales. 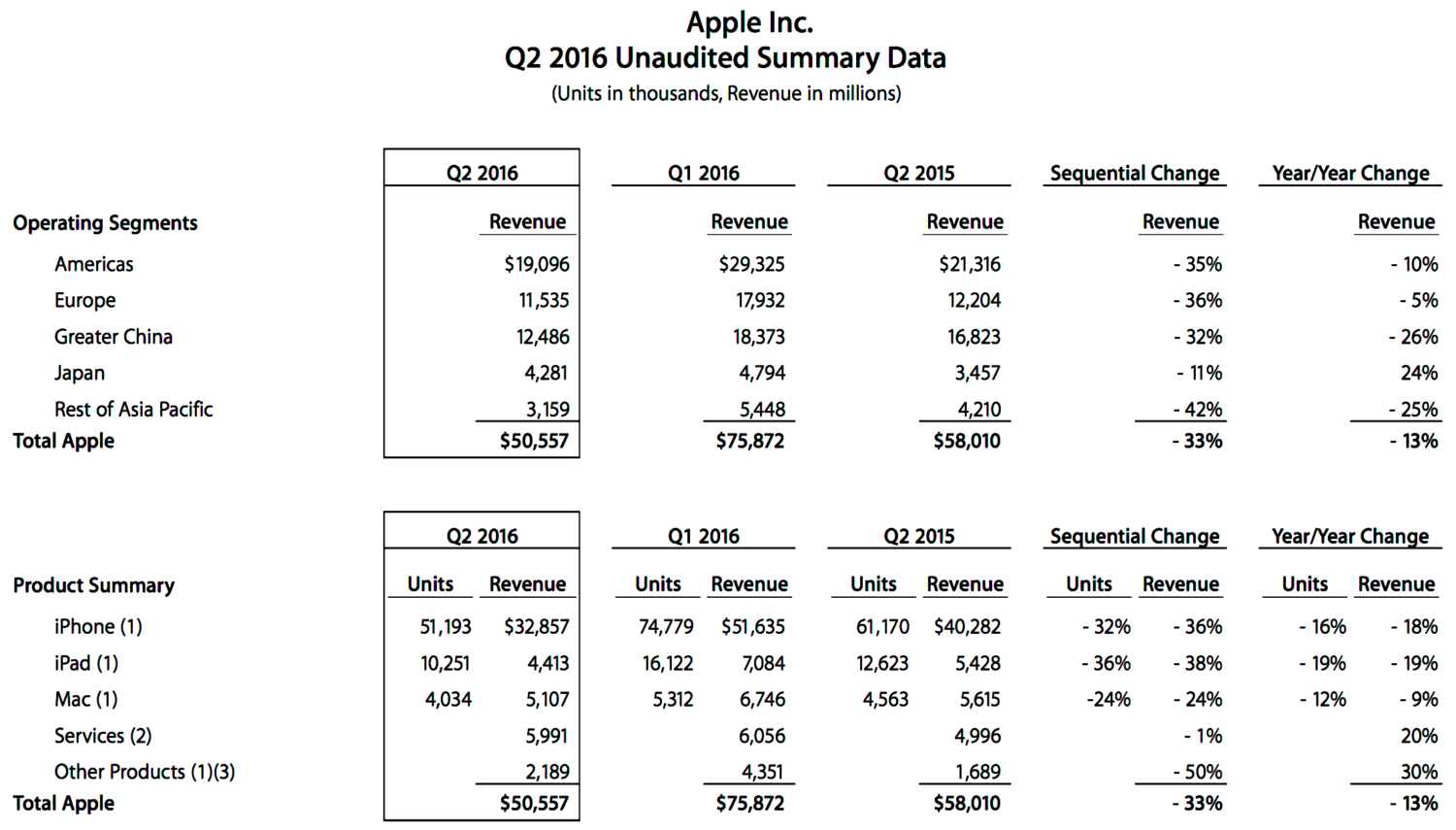 Fiscal second quarter tends to be Apple’s slowest, following the holiday rush and buffeted by rumors of the next iPhone—a phenom known for delaying customer upgrades. The dollar’s strength and foreign exchange rates can sap revenues, too. That said, the company often gets some sales surge from Chinese New Year in the world’s largest smartphone market (United States is second). Something else: The year-over-year comparison is disfavoring; iPhone 6 and 6s unleashed pent up demand for a larger Apple handset, thus pushing up sales in Q2 2015. Additionally, in 2016, Samsung surely snatched sales with Galaxy S7 and Edge; in the United States several carriers have offered buy-one, get-one-free promos.

Defying Gravity
Given these factors and early performance of the smaller, less-costly iPhone SE, Good Ship Apple is remarkably aright. The question nagging Apple investors and Wall Street analysts: For how long?

But the picture painted by Apple cheerleaders or critics is too complicated for the majority to call. Saturation is sure to slow sales in the top-two regions, but they are expanding in emerging markets. Meanwhile, mobile rises like a vulture over the dying PC market. Gartner and IDC both say that personal computer shipments massively declined during calendar Q1 2016—9.6 percent and 11.5 percent, respectively. Spending shifts to smartphones, mostly, in all major geographies. Gartner predicts that smartphone sales to end users, not the less-accurate-shipments-from-manufacturers metric, will reach 1.5 billion units during 2016.

People buying smartphones instead of PCs is potentially good for Apple—and that’s where iPhone SE could snatch sales on the strength of Apple’s brand. The fruit-logo company’s strategy is four-fold going into fiscal third and fourth quarters:

The last shouldn’t be underestimated. Apple marketing is legendary for its effectiveness creating sense of belonging to something greater and empowering people to achieve their dreams—or at least to feel like they can.

‘Not Growing’
Nevertheless, in a shocking concession, Cook acknowledges—in response to an analyst’s question: “The smartphone market is mature; I think that the market, as you know, is currently not growing“. That said, the chief executive is “optimistic” about iPhone’s continued sales success.

But tempering enthusiasm is the unsaid. During today’s conference call, Cook uncharacteristically didn’t call out China, the smartphone market most talked about among analysts. During past conference calls he proactively boasted about China’s contribution to Apple and iPhone. However, he later answered an analyst’s question, expressing that he is “optimistic” about China, where revenue fell 32 percent year over year during the quarter. Hong Kong accounted for the largest portion, because the currency is tied to the U.S. dollar, Cook says.

The CEO did proactively discuss India, where iPhone sales grew by 56 percent. “India is where China was seven to 10 years ago”, Cook says of a country where the current roll out of LTE should lift smartphone sales.

The install base is “up 80 percent”, Cook says, emphasizing how broadly important are established markets

Segment Snapshot
While iPhone is Apple’s most valuable commodity, and Wall Street’s obsession, other products demand attention, too. The company reports revenue from five segments. In addition to iPhone: iPad, Mac, Services, and Other. iPod, long separate, now falls into the latter category, where also are Apple Watch and Apple TV.

Services. The division now is second to iPhone, accounting for 12 percent of revenues. Many Apple Services are attached to ithe handset. Cook says that independent of hardware, the division is a source of “source of recurring revenue”. Analysis consensus: $5.7 billion. Apple actual: $5.991 billion, up 20 percent year over year, but down 1 percent sequentially.

Editor’s Note: A version of this report appears on BetaNews.