For fiscal Q4, gross margin was 38 percent compared to 39.9 percent annually and 38 percent percent sequentially. Once again, international sales accounted for most of the period’s sales: 62 percent, same as the previous year but 63 percent three months earlier.

The drama looking ahead tantalizes investors:

But these narratives are a story told in part during the next quarter’s earnings results. That said, promising uncertainty will be seen by some customers, investors, and partners as opportunity.

State of the Market
Before presenting quarterly results by category, let’s look at some recent analyst data.

iPhone. Even with iPhone 7 and 7 Plus release, eMarketer predicts that full-year 2016 U.S. smartphone share will be flat at 43.5 percent share. By comparison, Android: 52 percent, also will be static.

Caveat: The data precedes Samsung’s Galaxy Note 7 fiasco, which could yet benefit iPhone among a choice buying segment of trendier and wealthier buyers.

Broadly, the global smartphone market is slowing across major geographies. CSS Insight forecasts 4.1 percent year-over-year growth in 2016. However, the devices will continue to gain share of the overall mobile phone market. 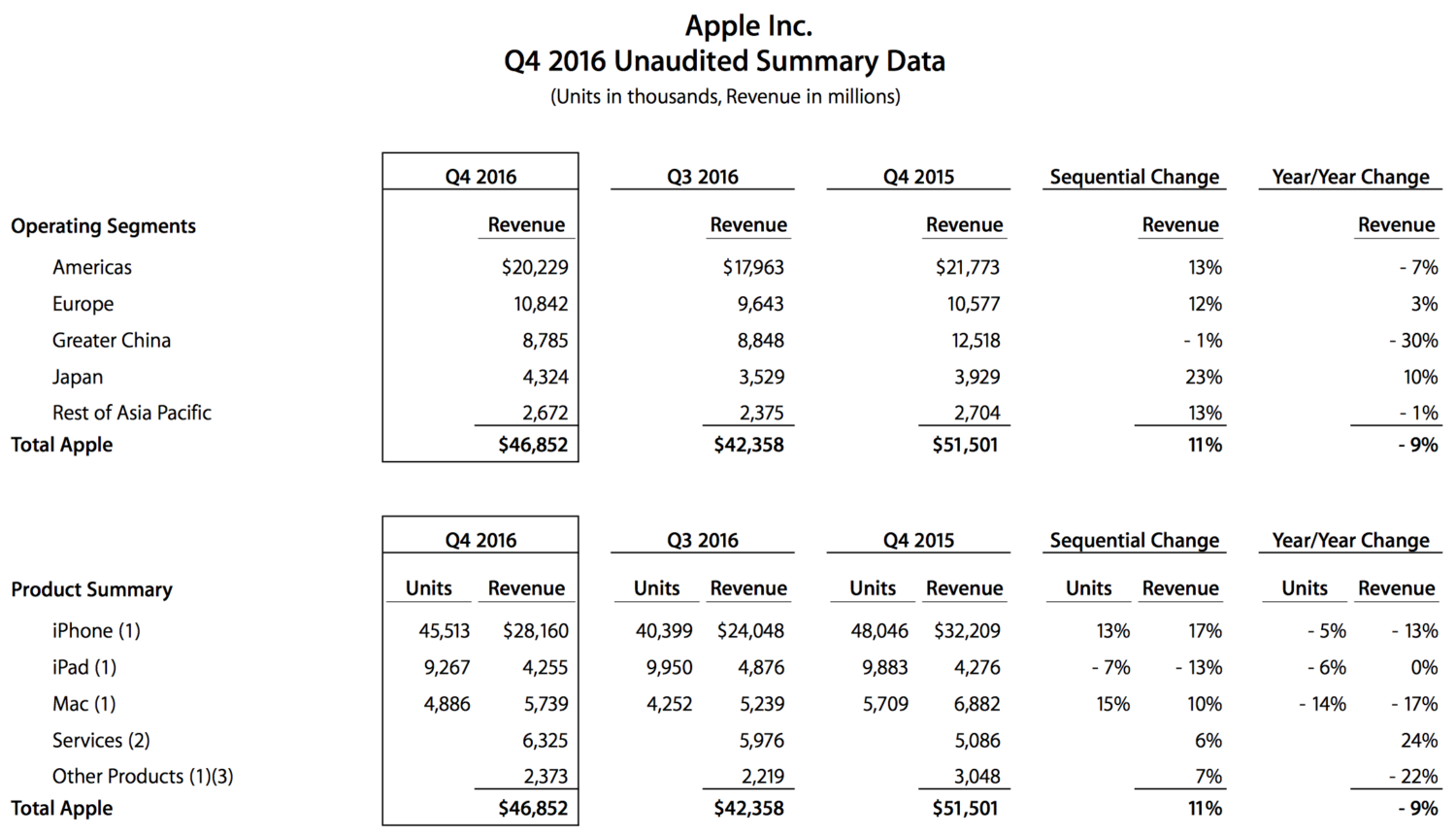 iPad. In the United States, Apple will continue to lose momentum, eMarketer forecasts: 44.7 percent market share. More than half of Americans use some kind of tablet at least once a month.

Broadly, the global tablet market declined 12.3 percent during calendar second quarter, according to IDC. Apple leads the market with 25.8 percent share, but shipments fell by 9.2 percent. Calendar Q3 data is not yet available.

Apple Watch. During third calendar quarter, which is largely congruous with Apple’s fiscal fourth, smartwatch shipments plummeted 51.6 percent to 2.7 million from 5.6 million a year earlier, according IDC. Google’s delayed release of Android 2.0 contributed to the declines; Apple Watch sales chilled in anticipation of the newer model.

The fruit-logo company remains category shipment leader, with 41.3 percent share, which fell by stunning 71.6 percent year over year. The numbers aren’t necessarily bad for the smartwatch, with Apple clearing out old inventory and Android manufacturers stiffed by the new operating system’s delay.

For most quarters since the 2008 economic collapse, Apple bucked market trends by growing sales and shipments even as rivals’ persistently stumbled. But with the last update to the MacBook Pro line arriving in March 2015, Apple laptops are overripe on the vine. The question: Will the expected new models debuting on October 27th reinvigorate demand?

iOS. According to App Annie, iOS revenue in China topped the United States during calendar third quarter: $1.7 billion, or by 15 percent.

State of Apple
Journalist Philip Elmer-DeWitt tabulates one of the most accurate assessments of analysis consensus of Apple product expectations. Consensus data is his, for professional analysts only.

iPhone. During fiscal fourth quarter Apple shipped 45.5 million iPhones, down 5 percent year over year. Analyst consensus: 44.93 million. Revenue fell 13 percent to $28.16 billion. The smartphone accounted for 60 percent of revenues, down from 62.5 percent a year earlier but up from 57 percent the previous quarter.

“iPhone sales were up year over year in 33 of our top 40 markets”, Cook says. He claims the company had the highest number of Android switchers “than ever before”.