The iPhone Crop
During the quarter, ended Dec. 31, 2016, iPhone accounted for 69 percent of all Apple revenues—a shocking percentage, in part because it is up after several quarters’ decline. Year ago: 68 percent. Three months earlier: 61.5 percent. The point: Dependence on a single product. That said, what a quarter for the workhorse. According to Strategy Analytics, Apple claimed the top spot from Samsung, shipping smartphones globally: 78.3 million units versus 77.5 million. But behind that success, there is failure: Samsung suffered from the Galaxy Note 7 recall. If not for those burning batteries, the Korean manufacturer might have kept its top spot and iPhone might not have done as well—of course, we won’t ever know. Future quarters will tell the more important story.

The quarterly surge masks short- and long-term trends. Samsung still easily bested Apple for all of calendar 2016—309.4 million units to 215.4 million, according to Strategy Analytics. Meanwhile, iPhone shipments declined from 2015: 231.5 million (its rival also fell, from 319.7 million). Both companies gave up market share to Chinese manufacturers Huawei and OPPO Electronics, for the quarter and year (see chart for more). These two, and others from China, expand at home and into neighboring emerging markets where Apple hopes to increase sales. All eyes shift from the world’s largest smartphone market to India, which is forecast to claim second place from the United States sometime this year. 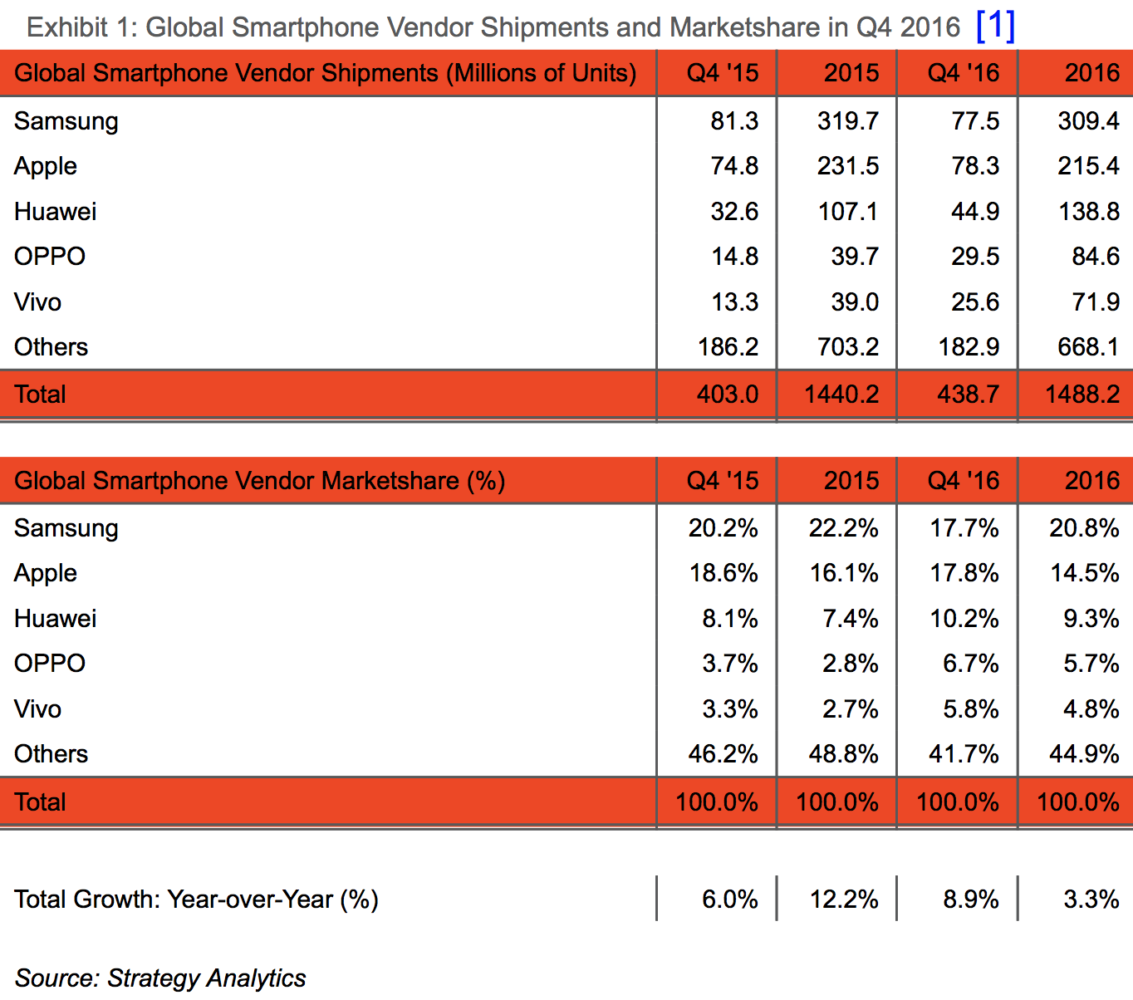 The question: How will Cook harvest Apple’s iPhone crop? Foreplay to that answer is important comparison: Strategist versus innovator. The Cupertino, Calif. company is best known, under Jobs, for disruptive innovation against established competitors. Often he also took risks that disrupted Apple—something I contend is necessary for future expansion. But there also is strong argument for taking success at one thing, or even several, and nurturing it. Consider how much the company has grown since Cook took over strategic leadership, even before his predecessor’s death. Apple revenues and global points-of-sale expansion are almost too high for meaningful comparison. True, Apple reinvented the smartphone and caught the market transformation from feature phones. The difference is the strategist capitalizing on an investment versus the innovator looking ahead to the next thing, and in process stunting potential returns before a product or category matures. The Cook in the kitchen makes the tastier feast.

Let me rephrase. Apple’s chief executive is an optimistic strategist. Where many pundits (mea culpa) see smartphone saturation, Cook perceives remaining opportunities. “I think the smartphone is still in the early innings of the game”, he told financial analysts yesterday. “Every year it becomes more important to people’s lives, and there are more things people are doing with it…I could have talked about Health. I could have talked more about CarPlay. The use of it in the enterprise is growing significantly—and so when I look at all of these things, usage going up, app developers still innovating, we’ve got some exciting things in the pipeline, I feel really, really good about it”.

Among the challenges ahead:

Services
The latter point deserves calling out, because of the attention given by Apple during yesterday’s earnings call and blogger and news media arm-chair punditry. Revenue for services, which includes Apple Music, Apps, iCloud, and iTunes, rose 18 percent year over year to $7.172 billion, or 9 percent of total revenues. That compares to 7.9 percent a year earlier or 13.5 percent the preceding three months, when the category exceeded the Mac. So despite all the noise about the segment’s importance, its overall contribution is less quarter on quarter, but could rise if in fiscal Q2 services revenues remain fairly constant set against lower companywide sales. Much depends upon the “150 million paid customer subscriptions” that Cook told financial analysts about yesterday.

Crucial to the iPhone ecosystem and retaining device customers is App Store, “which broke all-time records during the holiday quarter, including $3 billion in purchases in December alone, making it the App Store’s single best month ever”, Cook says.

Services and relationship to devices circles back to where this analysis started: The measure of Apple’s quarter is performance against major competitors, which I see primarily as Amazon, Google, and Microsoft. All three sell larger digital lifestyles, with cloud services as either anchors or hubs stacked vertically with: stores selling apps, ebooks, games, music, movies, TV shows, and other digital content; productivity tools like email and office applications; storage and synchronization services. Apple’s main business is selling tech things, while Google’s are more intangibles; Microsoft’s software as a service; and Amazon’s a mix of the two, along with, for devices, ebook readers and tablets.

Only Google really competes with Apple in the smartphone market, but less from devices and more from mobile platform Android, supporting services and stores and development tools.

Apple’s success as measure against itself or competitors depends much on how effectively services revenues expand from the iPhone customer base. Consider Microsoft as case study. The company once derived 80 percent of revenues from software. During calendar fourth quarter 2016, 28.6 percent came from segment Intelligent Cloud, which includes many, but by no means all, that fits into the traditional services categories. Customers aren’t quick to abandon investments made in applications, which Microsoft extended into its services expansion. Apple’s hook is apps that encourage iPhone owners to stay with the platform and upgrade, rather than throw away their investments. 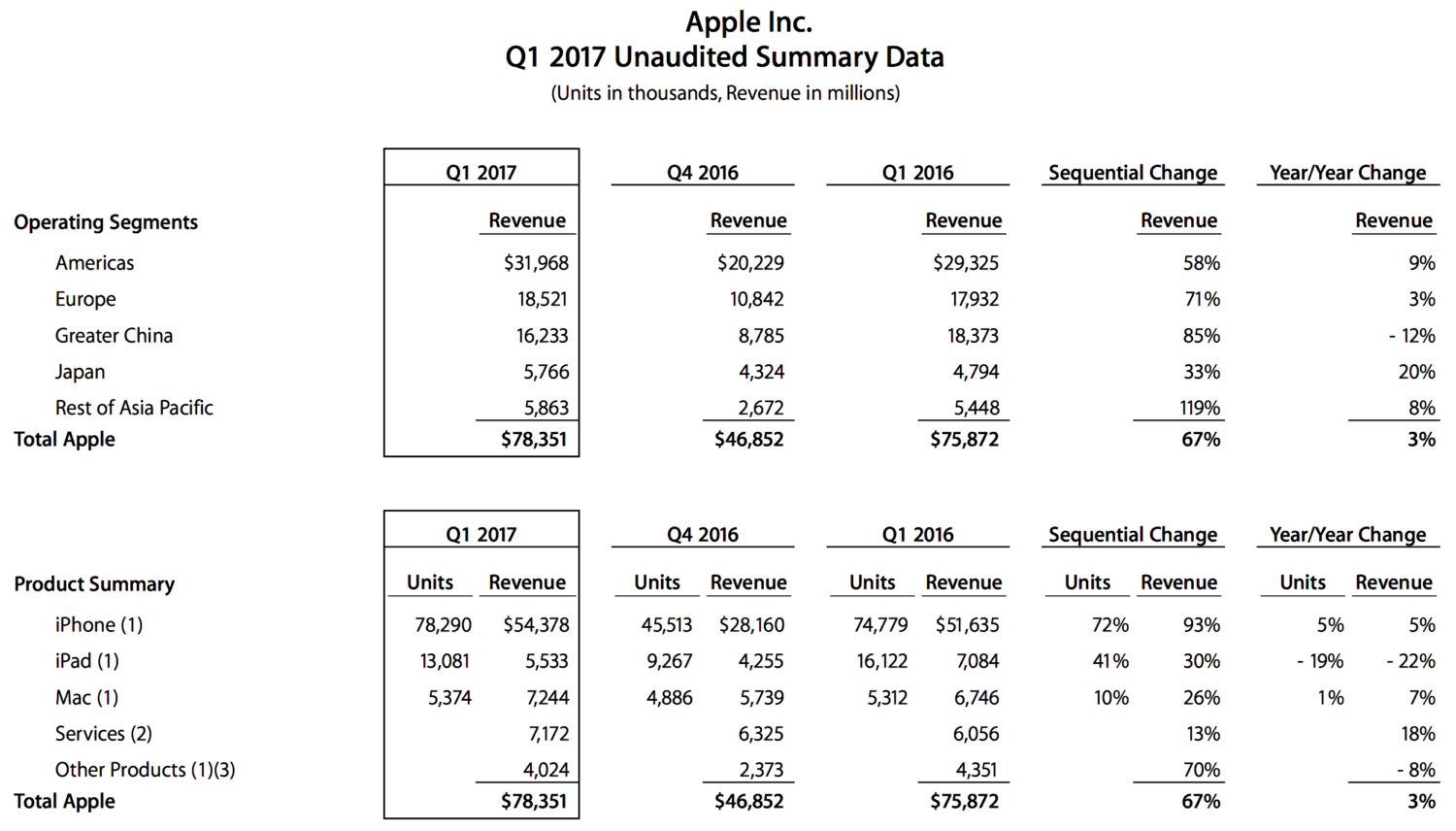 Wrinkle: The quarter worked out to 14 weeks, rather than 13, giving Apple a comparative boost across the board. As Stock Traders Daily founder Thomas H. Kee Jr. explains, for fairer comparison, the iPhone maker “would have needed to report earnings per share of about $3.53, higher than its reported EPS of $3.38 a share, to account for the extra week of business…Likewise, revenue would have to have come in at about $81 billion”. Observation: Even with the extra week, net profits fell.

Additional sales time also benefitted iPhone, adding, by analyst estimates, at least 5 million units. The difference: The fourth straight quarter of declines versus the reported reversal and return to growth.

Returning to fiscal Q1, gross margin was 38.5 percent, and international sales accounted for 64 percent of revenues. Nevertheless, the Americas remains the single-most important region, accounting for 40.8 percent of revenues, and growing 9 percent year over year. By contrast, China tumbled by 12 percent.

Wall Street responded favorably to earnings. Today, Apple shares closed at $128.75, up 6.1 percent. As I post they’re up ever so slightly in after-hours trading.