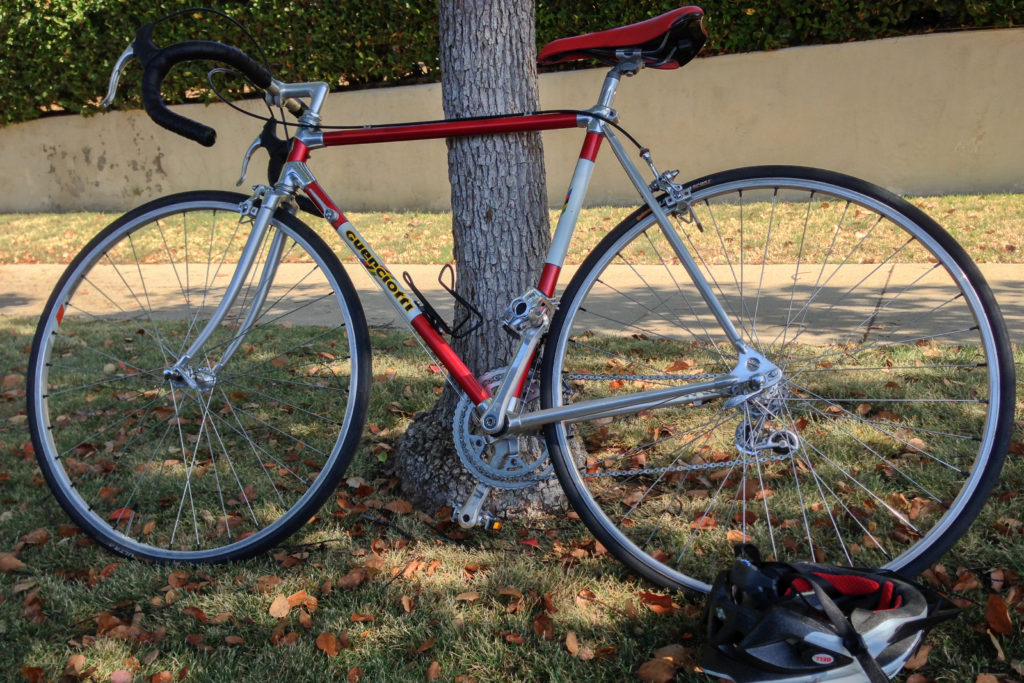 This afternoon I took my Guerciotti bicycle out for what likely was a last ride. After long deliberation, I decided to sell the vintage roadster—and two prospective buyers are tussling for ownership. The bike was a self-given birthday gift in 2013 that I sadly part with. But I tend to walk more than ride, and the 12-speed takes up valuable space (blocking access to the closet in my office). This beast demands to be ridden. Often. And it deserves an owner who will do just that.

During that last ride, while pulling up to Adams Ave. along Mississippi Street, I spotted a set of keys on the ground by a black Toyota Corolla parked behind another vehicle by the Stop sign. After assessing possible places the owner might be, I asked the restaurant right on that corner to take them, reasoning: Likely place for someone to ask if keys had been found. I later posted just-enough limited information on the NextDoor social network, encouraging: “Leave a tip. It was kind of the eatery to take the keys rather than me put them back on the street by the driver’s door, which is where I found them”.

My Guerciotti is a mid-1980s Sprint built around an Alan-made Aluminum frame (Corsa 487 tubing). She’s light—I’d guess not much more than 9 kilos (20 pounds) as rigged. Major components are Campagnolo-made, including the rims, and appear to be original-issue, too. The tubing is assembled in a lug-fashion that was innovative for the day.

Not many buyers would understand the value of a classic like this one. Only three have shown interest since my posting to Craigslist a few weeks ago. The first of them came to test-ride but, being one-inch taller, found the 53cm frame to be too small. He would have paid less to cannibalize the components—recognizing their worth—but I wouldn’t sell for any price to do that. I love this bike and want it to be ridden.

Last night, within one hour, two different prospective buyers contacted me—and strangely both are from Orange County, which is north of San Diego and closer to Los Angeles. Since I wasn’t expecting the second, I committed to the first, who said he could come for the bike on January 20; we negotiated a price on the phone. The other interested person communicated coming by today, and I decided that no buyer should be turned away. Better two prospectives than one.

Buyer Two texted this afternoon to set up a meeting—at 7:30 p.m. Say what? Test drive at night? I don’t think so. Nope. He planned to check out the bike, which will be a gift—for someone living in Boston! He plans to ship the Sprint. I questioned the sanity during winter, coyly mentioning being from Maine. He is from New Hampshire. Since he was almost certainly a sure sale and offered more than the other guy, I agreed to sell to him.

Not that I felt good about it. I try to keep commitments but—being burned so often by disingenuous Craigslist buyers—I am hardened a bit in my attitude. Out of fairness, I texted Buyer One: “Another buyer willing to pay more has appeared. He wants to look at the bike tonight. I feel that I should see how that plays out. The bike might still be available, depending on his evaluation (one person who looked at it last week really wanted it but found it to be too small; he is an inch taller than me). I don’t want to lead you on: I can let you know later tonight if the bike would still be available for you to see on Saturday”.

To my surprise, he responded by asking what Buyer Two offered to pay and if he matched would I hold the bike for him. I pushed back a little, asking if the bike was for him (yes) and how tall he is (5′ 5″); I didn’t want to pass on one only to lose both.

So I made the decision to reaffirm my original commitment to Buyer One and keep the Guerciotti in California rather than have the Sprint sprint across country. I texted Buyer Two, around 3:10 p.m.: “I contacted the person who was originally ahead of you and planning to come tomorrow. Break the bad news. He really, really wants the bike and will pay asking price. So, apologies, I must hold for him to buy tomorrow. At least you won’t have to drive here during Friday rush hour. Would have been good seeing another New Englander. Again, apologies”.

I did fib a little. Buyer One matched, which isn’t far from the posted price. Problem: Buyer Two hasn’t responded to this message, or the ones that followed, asking confirmation of receipt. I made good-faith effort to reach him hours before he might drive to San Diego. Hopefully, he received the texts but didn’t see them. Worst case: He shows up expecting to purchase, either unintentionally or deliberately (as a push-the-sale tactic).

If for some reason, neither gent takes my beauty I will keep her. Whatever happens, an updated paragraph or two will follow—hopefully with no unexpected drama.

Saturday morning: Buyer Two came, and my Guerciotti went. Looking at the space it filled in my office, I feel sad.