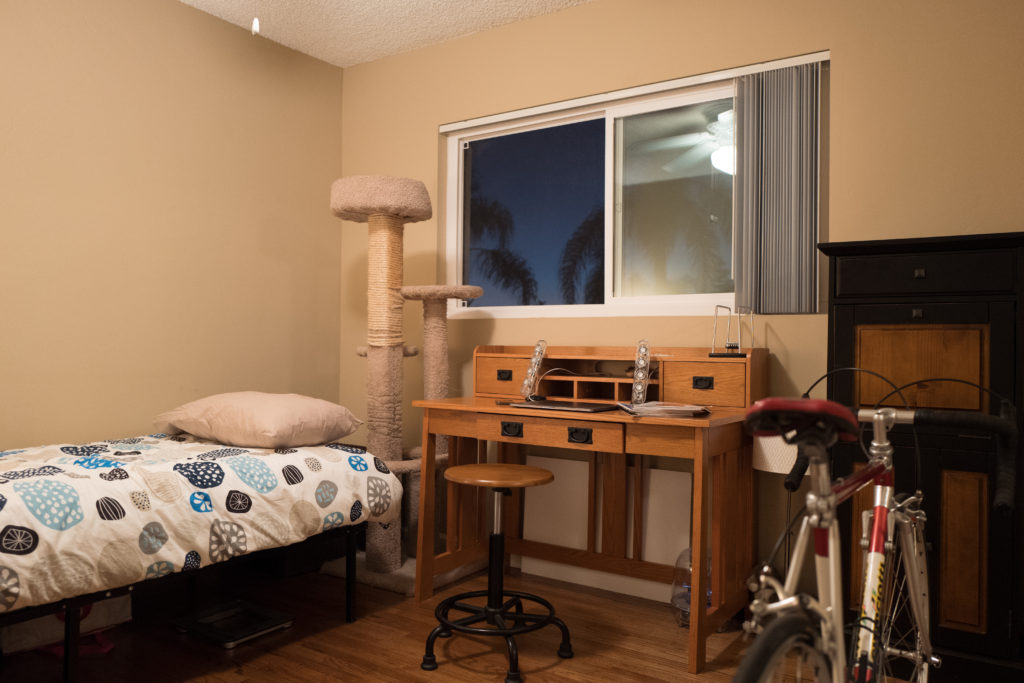 The workspace in our new apartment is something for me to be immensely grateful for this Thanksgiving. While the smaller of two bedrooms, one benefit is larger: The expansive window that looks out onto the street. Hehe, the cats and I share the view, which is on the same side of the building as our living room wrap-arounds. The dimensions offer better usable area than the larger room from our old flat.

The Featured Image, captured at 5:27 p.m. PST yesterday, using Leica Q, shows the view from the doorway. Vitals, aperture manually set: f/2.8, ISO 2000, 1/60 sec, 28mm.  My vintage Guerciotti bike, held upright by Saris “The Boss” stand, is in the foreground. Looking straight down from the roadster to the wall is the Casabelle Mail Center, which I purchased from Pier 1 Imports in late-Spring 2009 for use as my primary writing place. I now mostly use the handsome piece for storage and as pseudo-standup desk.

Beneath the window is the Belham Living Everett Mission Writing Desk with Optional Hutch that I bought from Hayneedle in May 2016 for $101.01, plus $4.99 shipping and $8.49 tax. It was helluva bargain. The hutch also makes an excellent perch for Cali and Neko, who still spend beaucoup time in their cat tree.

Upon the desk is a stack of Nature magazines (somebody is behind on his reading); Newton’s cradle; 15.4-inch MacBook Pro with (mostly useless) Touch Bar; Harman/Kardon SoundSticks Bluetooth speaker kit; and iPhone X. That’s the Studio Designs Retro Stool before the desk. 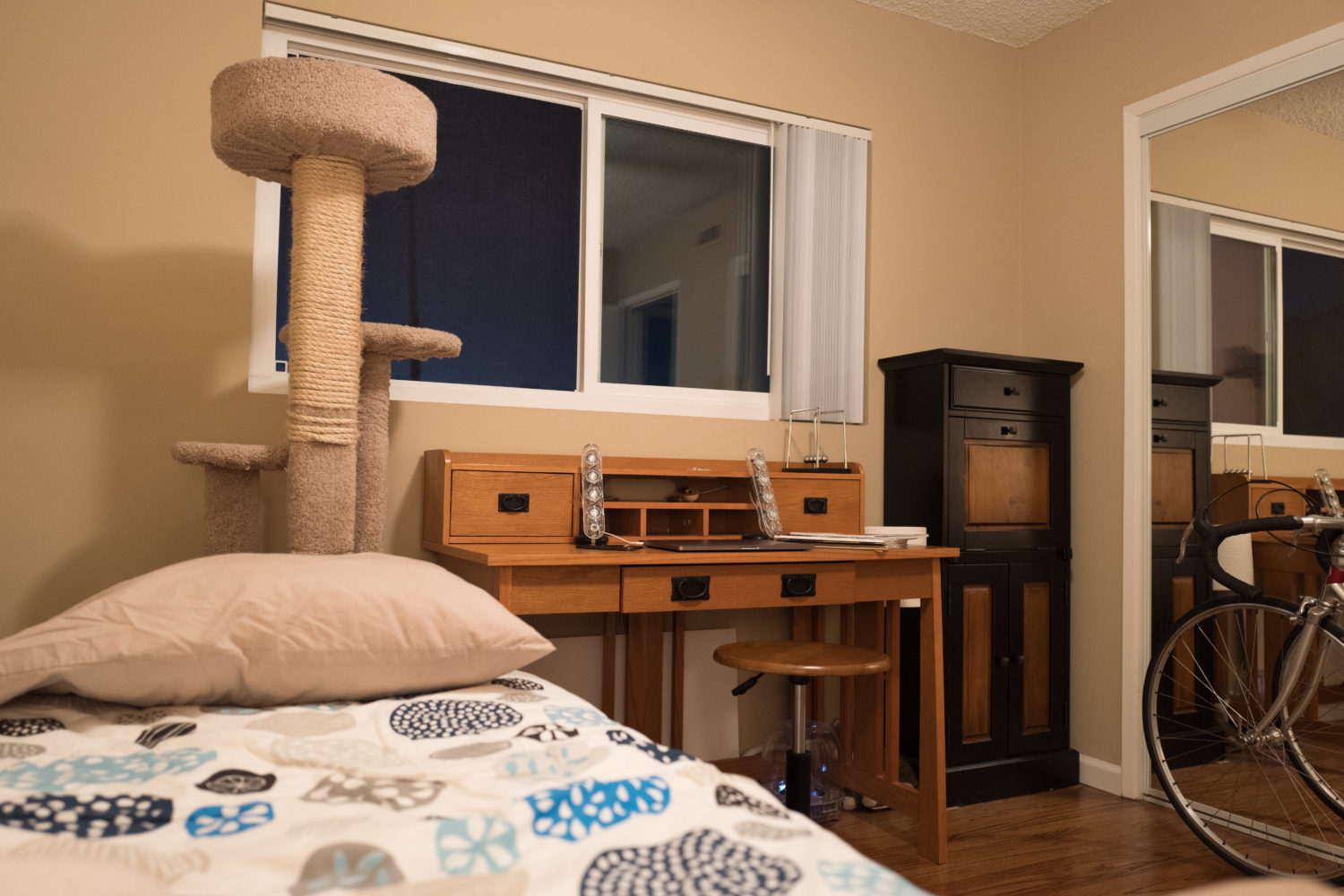 The second photo looks across the spare bed, which is outfitted with IKEA mattress, comforter, and sheets. I love that the mattress is sold rolled-up for easy transport (in our Honda Fit). Vitals are same as the Featured Image.

The bed frame is from Zinus, however—14-inch Euro SmartBase with wooden slats. My wife had the idea to switch to higher bed frames, beneath which we store stuff. The space is like having extra closets, Anne says, and she is right. 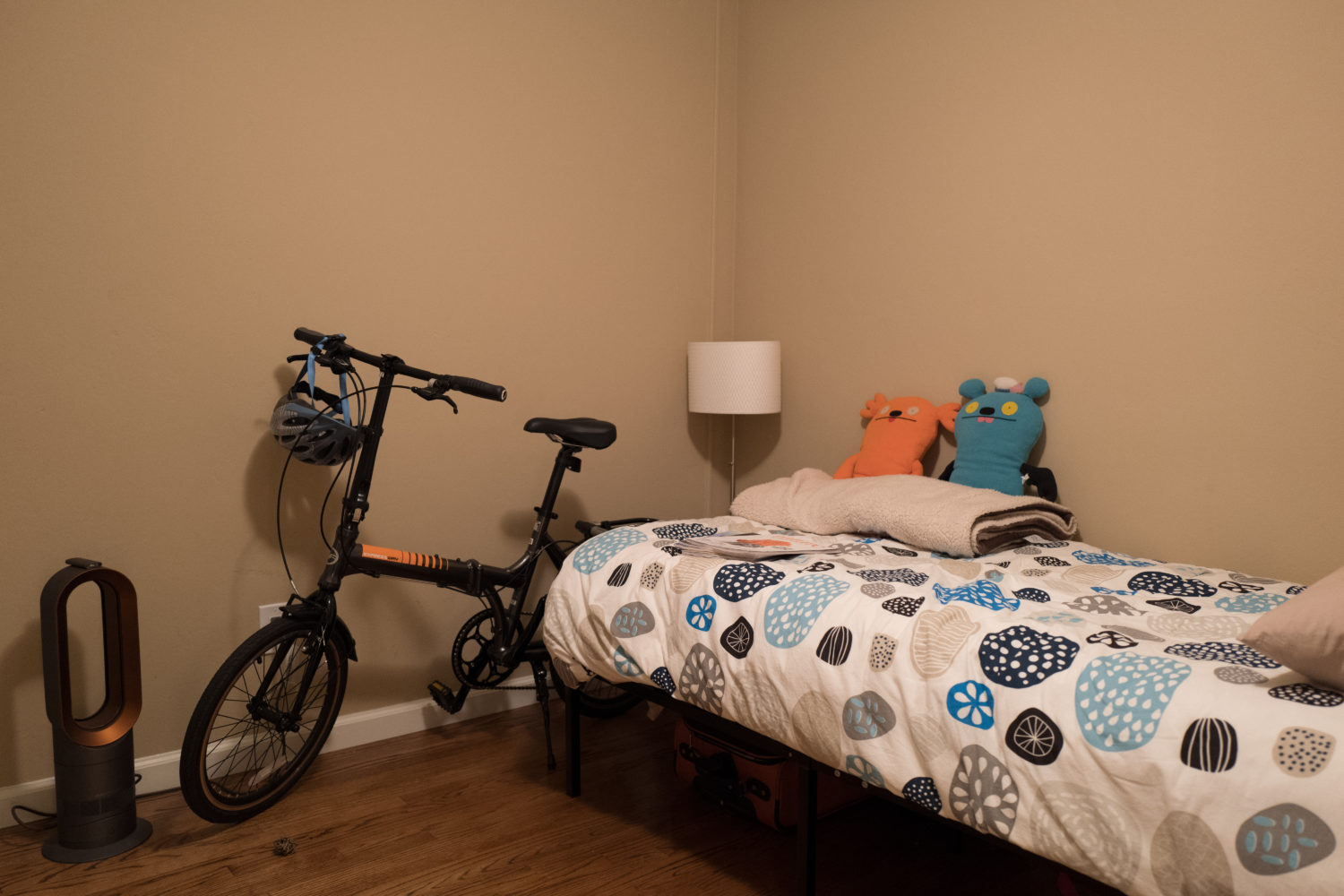 The final pic looks across the spare sleeper to the back wall where there is—whoa—a second bicycle. Anne rightly decided to give up her Giant Cypress hybrid, which lives up to its brand name for the enormous size. A friend took the behemoth, which we replaced with the Giant Expressway. Its smaller footprint fits the storage space—and as extra big benefit the thang folds up. Neat!

The Ugly Dolls on the bed belong to Anne. I bought them—First Mate Trunko (right) and Mrs. Kasoogi—during San Diego Comic-Con 2009. To the right of the bike is one of two IKEA ALÄNG desk lamps (the other is between the desks). To the left is the Dyson AM09 Fan Heater. Could I possibly have left anything out, like the contents of the closet? (Promise! W won’t go there.)

BTW, I shot the last photo later than the other two, at 5:44 p.m. Vitals are same, except for ISO 1600. All three are unedited, exported JPEGs from DNG RAW, which means the file sizes are huge.