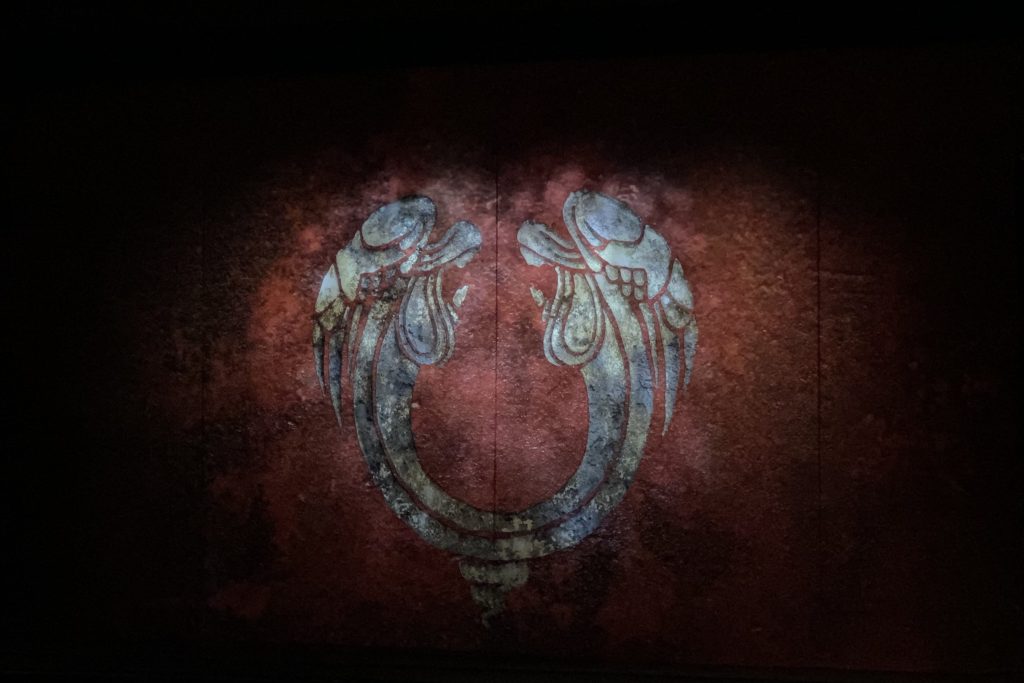 This afternoon, my wife and I attended one of two matinee showings for “Jesus Christ Superstar”, which is making a 50th-anniversary U.S. tour. The new stage play started in Syracuse, New York, on Oct. 1, 2019 and is scheduled to end in Fort Worth on Aug. 30, 2020. As I write, two local shows, at San Diego Civic Center, remain: Tomorrow at 1 p.m. and 6 p.m. PST. I enjoyed the performance enough to want to see it again, but that’s not happening.

Anne and I sat in the last row of the Orchestra section; seats 44 and 46. The location was close enough to fully see the performers and enjoy the music (the arrangement was fantabulous). Having not been to this theatre before, I chose to purchase presale tix that put us aways back but not too far. After attending, and seeing the musicians high over the back of the stage rather than in a pit before it, I might move forward. That said, because the cast performed across the stage, and above it, ORCHR3 V44 and 46 gave great vantage point. Closer seats are lower to the platform, perhaps too much so.

Truly Authentic
Among the principals, James Delisco Beeks won me with his strong vocals—and demonstrated why Judas, who opens after the Overture with “Heaven on Their Minds”, sets the tone (and not just musically) for the whole production. Beeks blew off the rafters, with intonation and timbre that conveyed authority and conviction. Tommy Sherlock, as Pilate, portrayed a very physical—in Jesus’ face—presence that matched dynamic range and Liverpool, England accent pushing through. Paul Louis Lessard delighted the audience with a campy King Herod; his costume was so good, I do wish we could have sat closer in to see it. 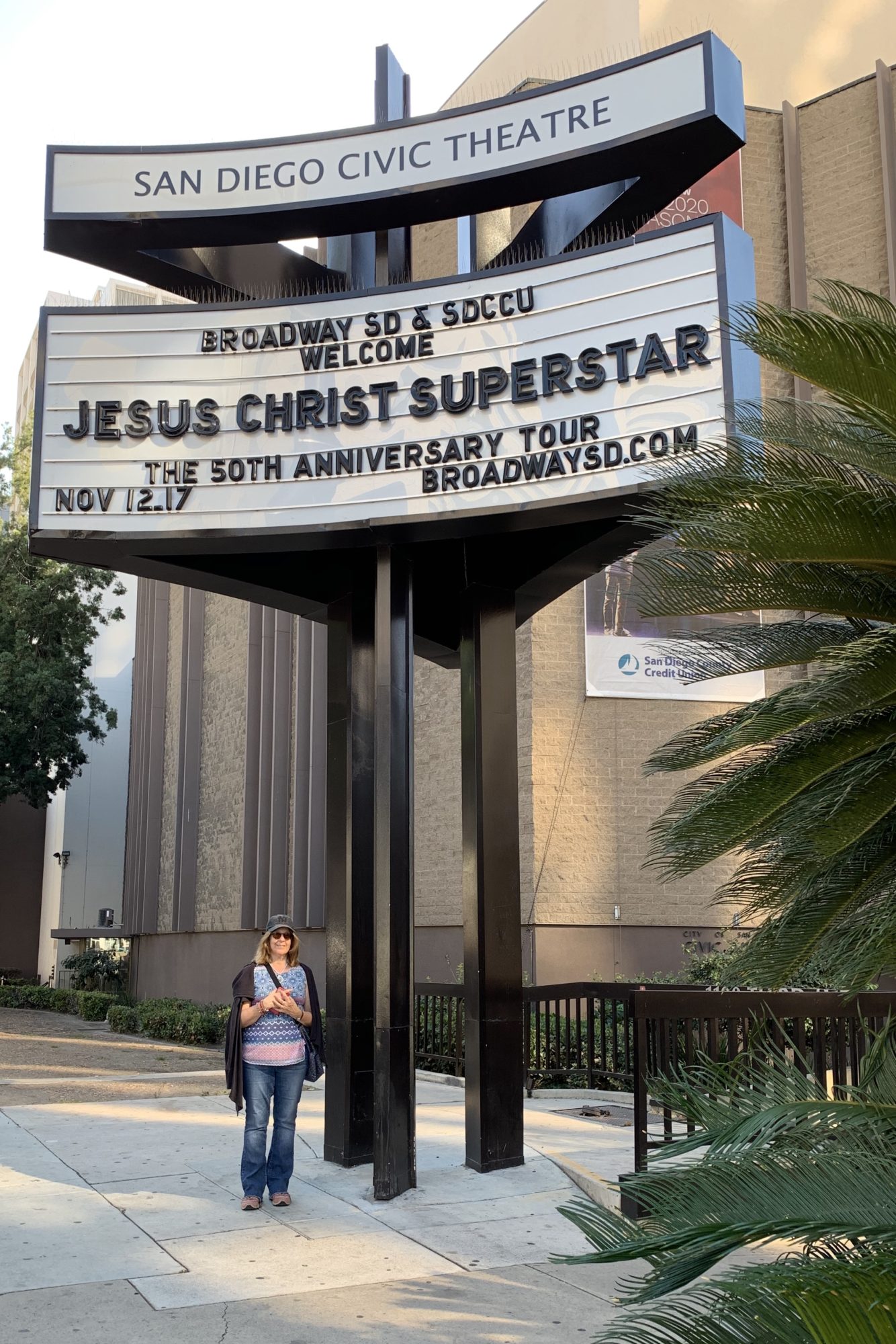 The choreography, lighting, staging, and set designs were excellent—perhaps to a fault, unless the goal is to get people like me to go for a second time (or more). Because there was so much going on in the performance, on the stage and above it, a single showing really isn’t enough to appreciate the production. If one of the company’s performances is officially filmed during the tour, and released digitally (or on Blu-ray), I’m buying. I so want to watch again. And again. And again. Of course, nothing recreates the theatre ambiance.

The cast conveyed great energy that filled the auditorium. Surprises abounded, such as glitter used to convey each of the 39 lashes (You got to see it to understand). There was also authenticity in the clever use of handheld microphones (often doubling as props), rather than obnoxious headsets; Jesus’ crucifixion on a speaker stand; and cast members playing instruments (not just the accompanying musicians). But Aaron LaVigne (Jesus) strumming acoustic guitar while signing “Gethsemane (I Only Want to Say)” diminished the emotional anguish from what is the musical’s seminal song. It is the climatic moment from which the final act rushes forward.

That said, as an entirety, JCS 50 is less musical theatre and much more rock concert, which makes LaVigne’s guitar playing—alongside the musical arrangement—truer to the original double-album concept, written by Tim Rice (lyrics) and Andrew Lloyd Webber (music) and, a half-century ago, performed by a cast of singers that included rock musicians.

The Original
I am not sure when to call the big five-oh. Various online sources, including Wikipedia, state that the original rock opera was recorded, at least partly, in October 1969 and released in September 1970. My recollection: The original album jacket stated October of that year. History.com identifies the 27th of that month,  as release date. Since the new production runs from 2019-20, does it matter which is 50th?

Jesus Christ Superstar is long-time favorite, and I still sing songs from the original double-album. My pipes aren’t great, but they’re good enough to entertain myself when, say, walking or doing chores (like washing dishes). I probably could belt out every word from memory, nearly 50 years later.

My older cousin Dan introduced me to JCS, which he loaned me in late 1971. I I begged my parents to make the record one of my Christmas presents. They did, later regretting the decision. I listened to JCS over and over and over again, much to my parent’s disconcertion. I don’t think either liked the music, which seems strange to me now as they were both 30 years-old.

The album’s appeal wasn’t so much religious, or anything much spiritual, but the presentation. The songs followed the last week of Jesus’ life, organized by days. The singers expressed such range of emotion with their voices, while I loved how orchestra and brass instruments melded with guitars and drums.

While Webber deserves great credit for the fantastic score, Rice’s lyrics matter more to me—as much today as five decades ago. My interest in writing of any kind started with Jesus Christ Superstar because of the lyrics. To this day, I still esteem Rice and Elton John collaborator Bernie Taupin as the best, storytelling rock lyricists of the past half-century.