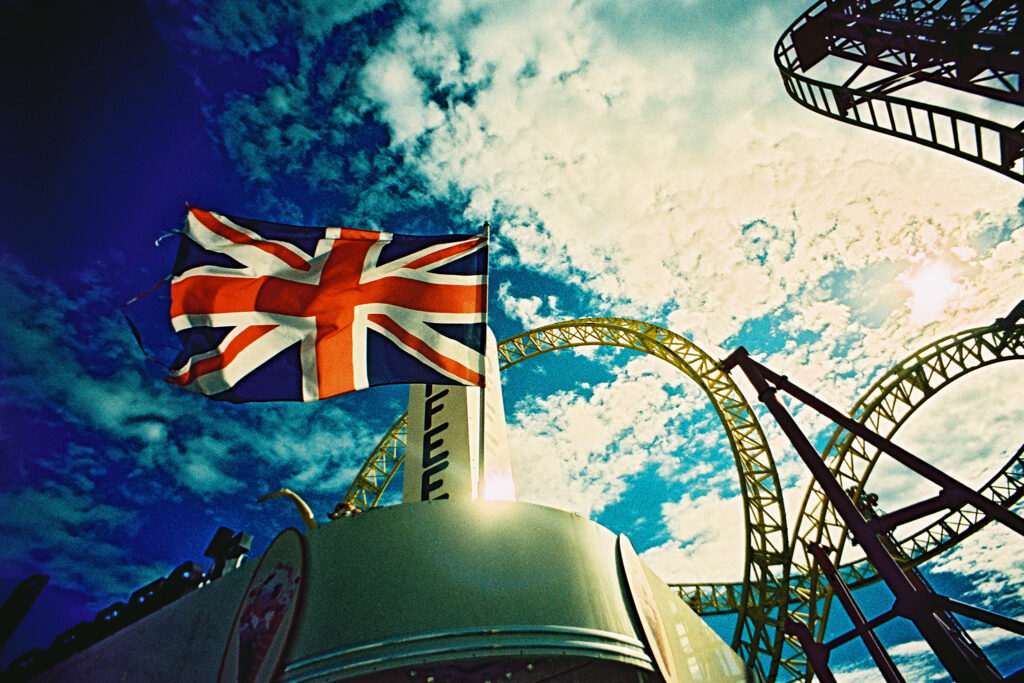 This first day of February 2020 brings Brexit to its inevitable, real beginning. At 11 p.m. GMT, yesterday, the United Kingdom officially severed its 47-year membership with the European Union. The turbulent exodus started with a June 2016 referendum and ended with a December 2019 Parliamentary election that brought to power a UK government capable of ratifying an agreement with the EU.

I mark the occasion with an additional entry this week—self-titled “Union Jack Flag and Rollercoaster” by Nick Page—that is most appropriate. Surely the nearly (estimated) 68 million peoples begin a roller-coaster ride that will last, at the least, through the eleven-month, EU separation-transition period that concludes on the last day of this year.

Our Saturday selection could be a Brexit metaphor, but perhaps only obvious to my convoluted mind and to no one else’s. “I take photographs using film cameras”, Nick explains about his shooting style. Drawing a parallel to digital photography, the European Union is seen by many hundred millions of peoples as modern. By contrast, film is considered to be archaic, which is a word some critics would use to describe a separate UK. But film also is an artistic choice that someone makes. It expresses individuality and independence—concepts espoused, in part, by the 52-percent of UK referendum voters choosing to break away from the EU. To be clear, I make no value judgement about film vs digital or Leave vs Stay but present a metaphor, appropriate to the moment.

And about the moment: “Taken at Southend on Sea with Lomo LC-W”, reveals Nick, who adds that it has been “a few years since I’ve done any cross processing. I’d heard that the newer Agfa CT Precisa 100 had moved away from the murky greens of the past and the results came out more like the vivid blues of the older version of the film”. Color made the cut over other candidates, although composition, grain, and timeliness matter, too.

A graphic designer living in Hertford, Hertfordshire, England, Nick joined Flickr in June 2008 and remains active—updating his Photostream as recently as yesterday. While the Lomography Lomo LC-W is his favorite camera, he uses the the Lomo LC-A and “also Superheadz cameras, Holga, Olympus XA2, Olympus Trip 35, and Olympus OM10. When I’m feeling a bit flush I even take a few Polaroids”. Do check out his website.