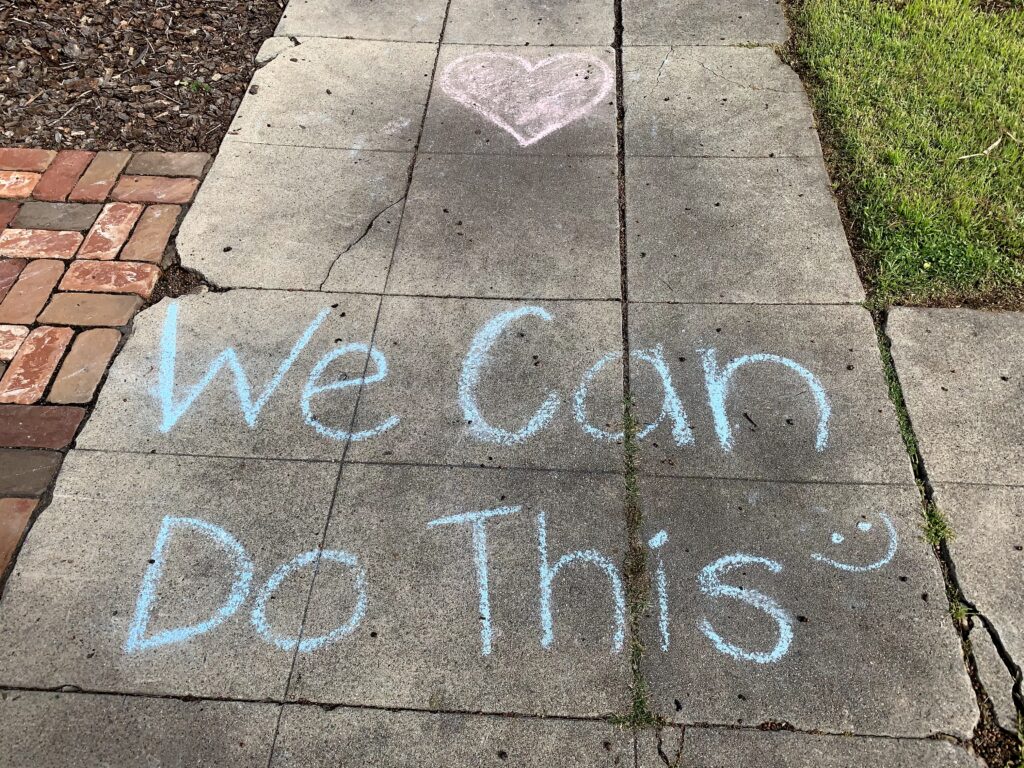 Along several sidewalks in the neighborhood, kids who have been forced home by school closings express in chalk positive sentiments about beating back or overcoming the global crisis presented by the conjoined pandemics: Viral—SARS-CoV-2 (severe acute respiratory syndrome Coronavirus 2), better known as COVID-19—and socioeconomic. One message moved me more than the others, for being affirmative against adversity.

“We Can Do This” is a proclamation of will, of determination, of taking responsibility—with the plural meaning everything. We can be two or more all the way up to collective humanity. But the importance is greater, as the sentiment explodes in context: In California, like a handful of other states, Governor Gavin Newsom has ordered all 40-million citizens to “stay at home” and practice so-called “social distancing” behavior as a strategy to slow spread of the contagion. All businesses, but a handful considered to be “essential”, are closed. We are apart physically—separated by six feet or more—but we are close in desire.

The pandemics are grim-makers. Today, the United States surged past China as the nation with the largest number of identified (and also disclosed) people infected with SARS-CoV-2: 85,635 out of 531,860 globally (175 countries). Only 122,203 have been identified as recovered worldwide, while the official death count is 24,057. Hospital emergency rooms across Spain and Italy report being overwhelmed—as are those in New York, where there are 39,125 confirmed cases.

Meanwhile commerce crumbles, and the economy with it. Closed businesses mean furloughed or laid off workers. Today, the U.S. Department of Labor released March 21 week-ending data on new unemployment benefits claims, which were up a stunning 3 million to 3.28 million from the previous 7-day period. “This marks the highest level of seasonally adjusted initial claims in the history of the seasonally adjusted series”, according to DoL. “The previous high was 695,000 in October of 1982”.

Former employees aren’t alone in desperation. Some employers are, too. For example, Cheesecake Factory and Subway are among a growing number of retailers that are unable—or unwilling, being closed—to pay April rents. The commercial carnage reaches everything from airlines to hotels to shopping malls—and more businesses between them. Tomorrow, the U.S. House of Representatives is expected to approve a whopping $2 trillion economic stimulus package that the Senate approved yesterday.

“We Can Do This” is a battle cry, as human economic and social societies wage war against Coronavirus.

Circling back, we come to the Featured Image, which I captured using iPhone XS  while walking by the house where lives Goldie, who was profiled in my “Cats of University Heights” series in  September 2017. He still resides there, as do the elementary school-age sidewalk graffiti optimists. Vitals: f/1.8, ISO 25, 1/1661 sec, 26mm (film equivalent); 10:03 a.m. PDT, March 22, 2020.