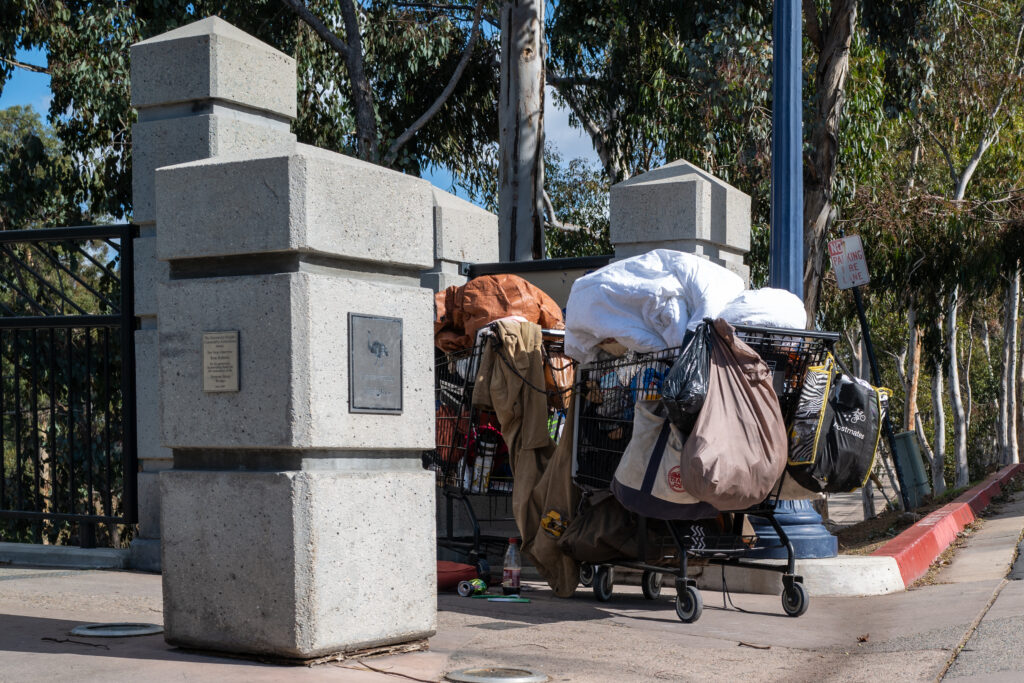 I specifically shot the Featured Image, yesterday using Leica Q2, to illustrate this essay. Vitals, aperture manually set: f/5.6, ISO 100, 1/400 sec, 28mm; 11:22 a.m. PST. The carts belonged to one of three homeless men gathered together a few meters away on the Hillcrest side of Vermont Street Bridge (University Heights is on the other). For sure, San Diego has a significant indigent population. But I write about San Francisco and something that surprises me—and perhaps will you, too.

According to the SF Chronicle (sorry, subscription required), the city is “currently sheltering more than 2,200 homeless people in about 25 hotels” and the “monthly program costs range from $15 million to $18 million”. By my math, that works out to between $6,818.18 to $8,8181.82 per person each month. If these people were paid, the equivalent annual salary would be between $82,000 and $98,000. Oh, and looks like the United States government will cover costs through the end of September 2021.

An executive order issued by President Joseph Biden on January 21 suggests that the homeless hotels qualify for emergency measures dictated by the Stafford Act that Feds and the States are applying to COVID-19, which is caused by SARS-CoV-2 (severe acute respiratory syndrome Coronavirus 2): “FEMA shall make assistance under this section available at a 100 percent Federal cost share”. Assuming 1/1 through 9/30, U.S. taxpayers would subsidize San Francisco somewhere between $135 million and $162 million.

That’s a whole lot of money, and I wonder how much value comes from it. My concern: Well-meaning government bureaucracy pissing away resources that could be better allocated for assisting the people who are supposed to benefit. Give them the means to help themselves to become independent and self-assured.

The emergency lodging is part of Project Roomkey, about which California Governor Gavin Newsom says that “one out of every five homeless individuals in CA have been served by Project Roomkey—an unprecedented 22,300 people in six months”. But what I hear is that four out of five indigent folks are still in need, if not on the streets.

Official tallies of the homeless are somewhat outdated because of the pandemic. Multiplying Newsom’s number by five puts statewide total at 111,500—but that is low compared to all other data available. Statewide guesstimate from other sources (and likely low): 135,000. An official count conducted last year in Los Angeles put the number of homeless there at 41,290—66,436 for all LA County.

San Francisco’s tally, as of 2019—and this year’s count may be cancelled because of COVID-19 concerns—is 8,011 as officially reported but 9,784 by the city’s broader measuring criteria. Again, this data is two years old.

Homeless hotels aren’t the only housing that SF provides. Based on data compiled by the National Homeless Information Project, Vox Media’s Curbed San Francisco explains: “In cities like SF, the number of at-risk people in city-provided housing is much higher than the number of homeless persons—over 9,500 in all. So rather than 8,000 or so originally estimated, SF should really be counting well over 17,000”.

Which again makes mean wonder the value of spending between $6,818.18 to $8,8181.82 per person each month on emergency homeless housing. Either amount is way more than many working American families earn—well, when they aren’t force-furloughed or fired because regional or state stay-at-home orders have shut down their employers or own businesses.

I don’t suggest that needy people shouldn’t be helped, particularly if they’re eager recipients who want to improve their lives. But my experience as a journalist tells me that government throwing huge sums of money at problems rarely is the solution.