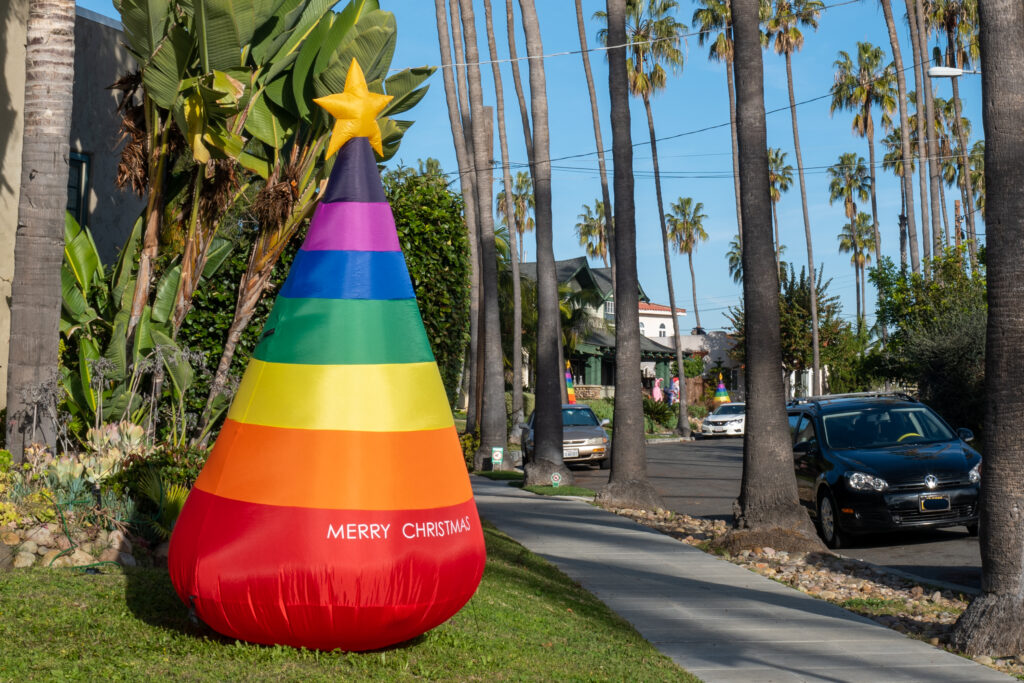 Last week, while walking along Panorama Drive, I passed by what seemed like the strangest holiday decoration: An inflatable, rainbow-colored Christmas tree. The next day, there were three. The day after, my wife and I walked over so that she could see. We found four more—not every one erect but all unmistakably identifiable even when deflated. This will be our fifteenth Christmas in this San Diego neighborhood, and I have never seen such signs like these.

As I opined on July 4th, about seeing more Pride flags than the Stars and Stripes, University Heights has undergone dramatic, observable changes since start of the SARS-CoV-2 (severe acute respiratory syndrome Coronavirus 2)/COVID-19 lockdowns in mid-March 2020. New residents, many of them Northern California escapees, are everywhere. Their emigration contributes to soaring rents and skyrocketing home sale prices. The newcomers also bring different values that are commiserate with adjacent Hillcrest, which is known as a gay enclave. But Pride holiday trees, all on the same street?

That’s the odd thing: I haven’t seen the inflatables anywhere else in the neighborhood other than the seven along Panorama. That quarter-mile horseshoe packs the biggest and highest-value homes in UH. You’re in the money if living there, and you can certainly afford fancier decorations than lawn inflatables. Or maybe I’m mistaken and the blow-ups are a status symbol for the wealthy. A quick price check reveals: $89.95 from Home Depot; $69.95 from Walmart; $55.99 from Target; and—the get it before Christmas discount of—$29.99 from Lowe’s.

My questions: What are those trees really meant to represent? Is there a culture clash between residents, with some making a statement supporting their lifestyle over others? Is it a Pride evangelism thing, where one person got a bunch of the inflatables and gifted neighbors? Maybe the things were on sale, and someone grabbed a bunch and shared? Is it one of those “Keeping up with the Jones” situations, where people imitate their neighbors—not wanting to be seen as less Prideful (and therefore progressive and inclusive) as others? Hey, they want to fit in with the group! Or was there a street meeting and decision made among some homeowners to make a bold, affirmative statement?

Because, as I stated earlier: These things are nowhere else but along Panorama. That is in University Heights. I can’t speak for nearby Hillcrest, Normal Heights, or North Park.