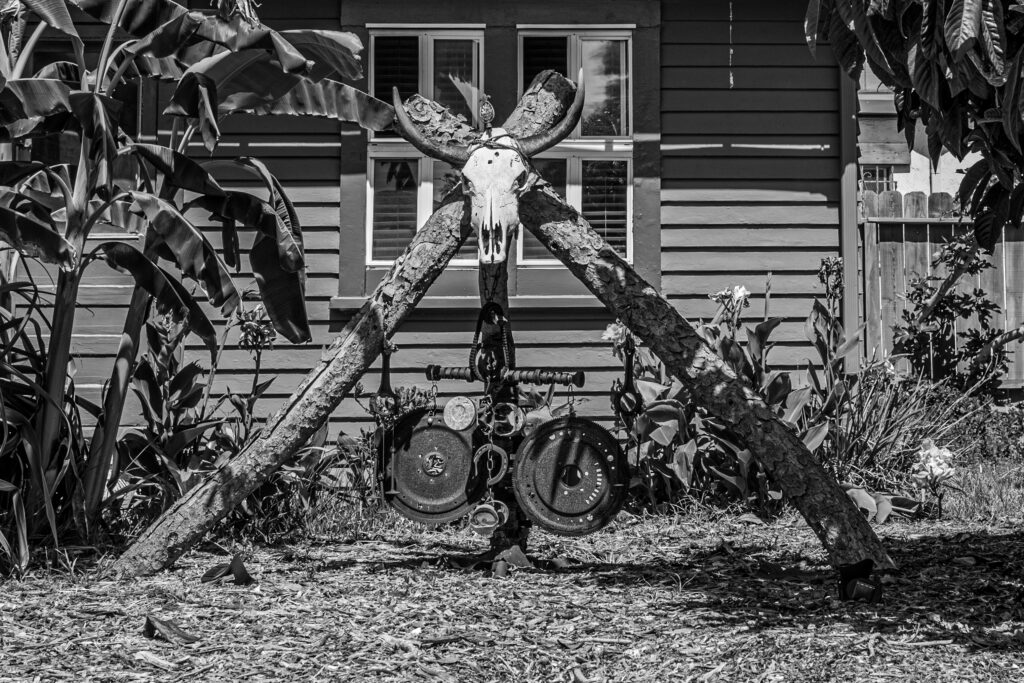 I don’t know what to make of this thing. Do you? There is something about the, ah, artwork that conjures images of animal idols worshipped by ancient cultures. As such, I am somewhat hesitant to share the Featured Image, captured today using Leica Q2 Monochrom. Vitals, aperture manually set: f/5.6, ISO 200, 1/800 sec, 28mm; 12:44 p.m. PDT. I took another at f/2.8 but prefer this shot.

My understanding is that goats are often associated with the occult or Satan worship. For sure, there is a whole lot of potential symbolic imagery to associate with this thang—and all of it beyond my knowledge to decipher. For example, what’s that emblem on the metal stake through the skull? Are those hanging cogged machine wheels supposed to represent overly large testicles? Or do I make something out of nothing—someone having merely cobbled together junk to make a personal showpiece?

Pee-Pee, who was profiled in my “Cats of University Heights” series two weeks after the series started nearly six years ago, used to live on the property. I haven’t seen her in years and so must assume that she is gone—hopefully not, uhm, sacrificed to the lawn god. Gasp, watch your kids! Birney Elementary is but a block away. Child sacrifice is a well-documented ritual among ancient goat worshippers; modern times, you don’t want to know and neither do I.