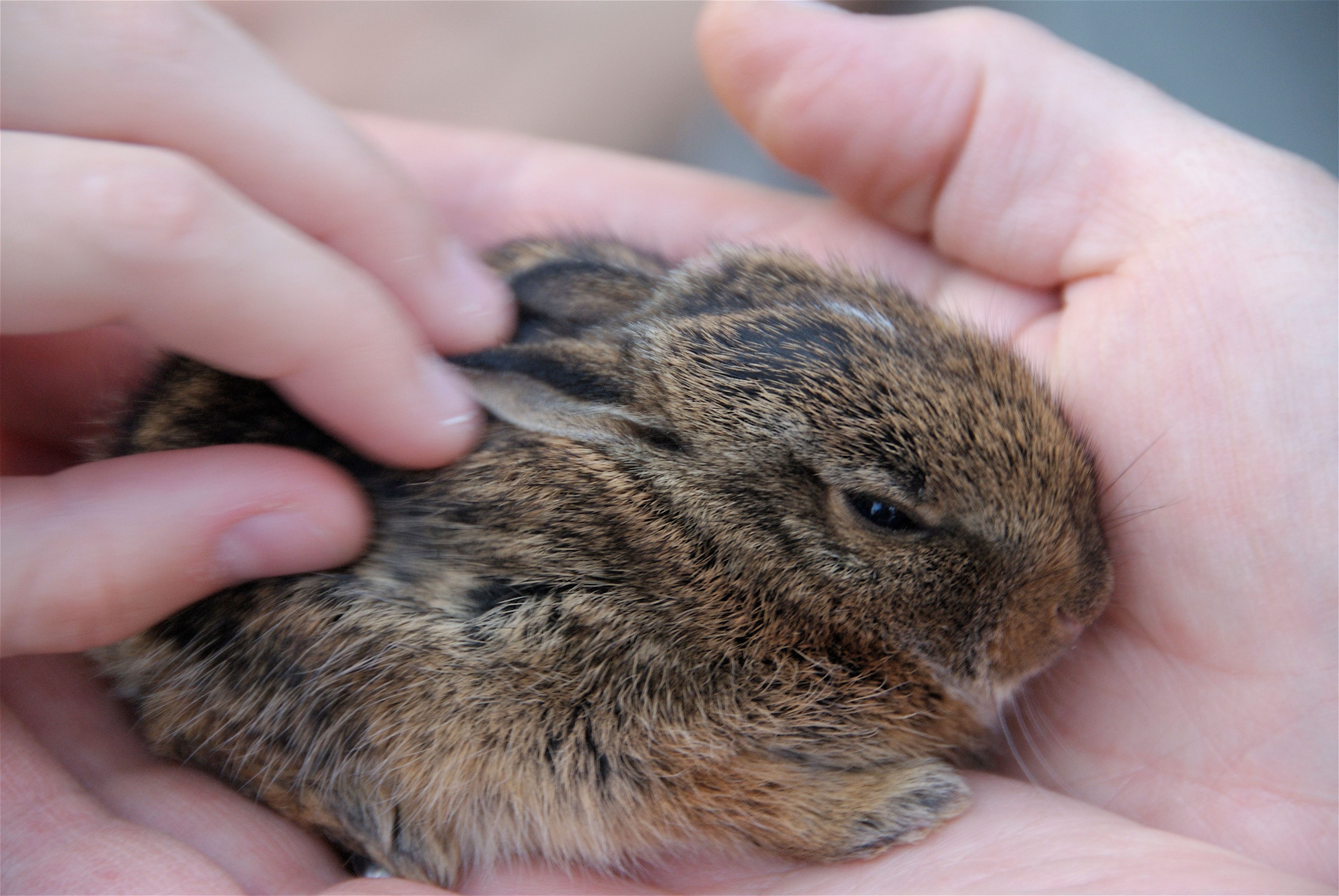 This morning I got a delightful call at 10:03. Penn Camera had received, finally, my 18-200mm f/3.5-5.6 G ED-IF AF-S VR DX Zoom-Nikkor lens. I’ve been waiting for this lens since getting the Nikon D200. This evening I carried the lens out on a bunny watch. Some evenings, my wife, daughter and I watch the furballs frolic in the neighborhood across the main street.

We bumped into two ladies (they looked like a couple) trying to find a home for an abandoned bunny. One of the ladies carried the kitten, she called Bubba, cupped in her hand. His story: Yesterday, the ladies’ cat brought home the baby bunny, apparently without injury. The women fed Bubba diluted Half `n Half by way of eye dropper. Last night, after seeing that the animal was OK, the women put the baby out in their yard. But they were uncertain of the nest’s location. Today, their neighbor found the baby on his lawn while mowing.

We took the rabbit because we have two house rabbits, which suited the women just fine. They were more hopeful of Bubba’s survival with a family owning rabbits. During the chance meeting, my daughter met another girl her age, who also owns a rabbit. For a time there was some uncertainty which girl would take home the critter.

Bubba appears to be 2-3 weeks old. The bunny ate grass when put down this evening (while we discussed with its finders about its fate). Later, at home we fed the bunny a small amount of carrot, hay, and grass. The rabbit can drink and does appear to poop on its own. We rubbed the tummy to help it pee. The bunny is still young enough to have its white spot, which means it’s too young to be on its own.

My inclination is to move Bubba along as soon as possible. We either need to find a wildlife rehabilitator or the nest. Either change will likely increase the bunny’s chances of survival. According to the House Rabbit Society, less than 10 percent of orphaned bunnies survive in captivity. The animal needs professional care, either an experienced human or its mother. I’m convinced that if the bunny had been put out tonight, the mother would have found it. She may have done so last night. Rabbits tend to build nests in fairly open places, like the middle of someone’s lawn. I wouldn’t be surprised if the neighbor who found the bunny this morning has a nest on his lawn.

Right now, Bubba is in a box in the living room. There are cosy blankets inside and another as cover to help the baby bunny stay warm. I checked on the little orphan a few minutes ago. It was chomping on fresh greens (grass and clover from the lawn) and alfalfa. Hopefully, Bubba can survive the night.

Yes, I took the picture of my daughter holding Bubba with the D200 and new 18-200mm lens. Unfortunately, the image is one of maybe two good ones of the series I shot. I simply didn’t have good light, seeing it was 8 p.m. local time under a partly overcast sky. Being in a rush, I fiddled with little more than ISO. The image above was shot at ISO 400 but only 1/80 second shutter. Nobody—my daughter, Bubba or me—held still enough for the slow shutter speed. Sigh.