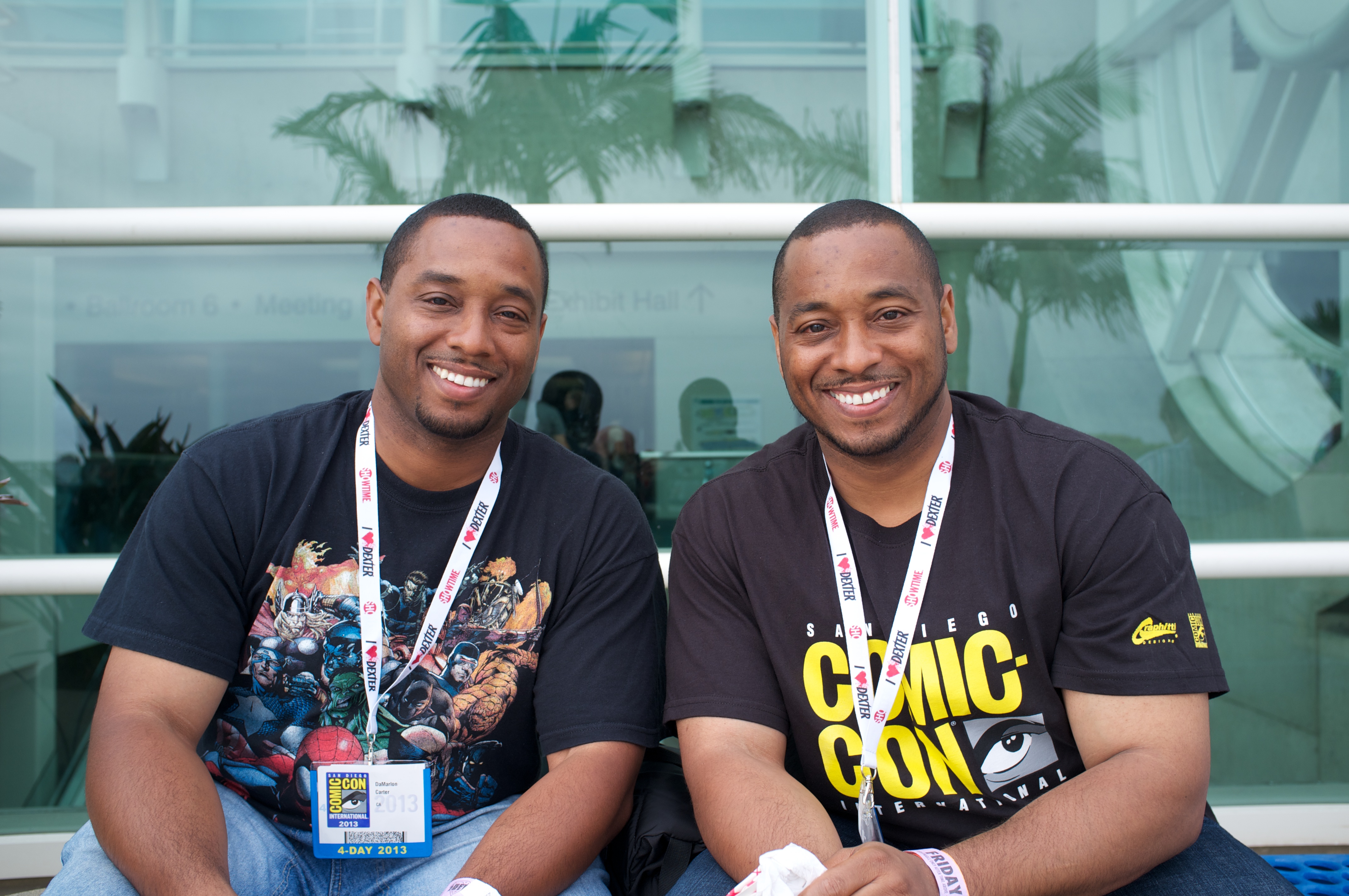 Two weeks ago, I started serializing my ebook Comic-Con Heroes: The Fans Who Make the Greatest Show on Earth. Welcome to the third of 13 installments before the book releases into the public domain, on July 8, 2015, after my current commitment for Amazon KDP Select ends. In the first segment we met The Dark Knight, and in the second a Medieval, Scandinavian fighter.

The third profile gets more to the core Con—not people who attend to dress up and be someone else for a day or few—but those who are there to collect. Comic book and toy collecting are undercurrents that keep the event vital. Hollywood productions may get more media attention, and for sure lots of people line up for television show and movie star-studded panels. But the show’s lifeforce are the artists, their fans, and people who look for rare comics or limited-edition items.

With that introduction, let’s meet The Collectors.

I climb up the stairs, going back to the upper outside terrace, where DaMarlon and LaMyron Carter sit side-by-side, quietly gabbing. The beefy men sport identical close-cropped cuts, tight moustaches, and bold, beaming smiles. While casually clothed, T-Shirts and jeans, they cast larger presence that catches my attention.

The Carter twins are seven-year Comic-Con veterans, and they have a relaxed demeanor that reveals the truth. The men, both architects, are from Detroit, where LaMyron still lives. His brother resides in Orange County, Calif. The Con is their meetup, a chance to catch up the way siblings do, but as twins the connection is deeper. It’s Day Two, and their time together is halfway spent.

I ask the long-timers how the event has changed. “There’s a lot of focus on movies and television, a lot more than when we first started coming”, LaMyron says. “Of course, the element was there, but now it’s a big draw. It’s bigger than everything else combined”.

In a July 2013 San Jose Mercury News story, reporter Karen D’Souza asks but fails to answer: “Has Comic-Con sold its soul to Hollywood?” That’s a common topic debated around the convention center. I don’t have the perspective of attending as long as LaMyron.

While the Con has changed, the Carters’ main reason for attending is the same as when they started.

“We kind of grew up with comic books, stuff like that, but it morphed more into toys—and that pretty much what has us coming now”, DaMarlon says. The twins come to buy stuff, but not just for themselves. “We’ve got a group of guys, who met online—different toy forums, things like that—about eight of us”.

LaMyron finishes his brother’s sentence and continues: “About eight of us, from Texas all the way up to North Carolina [and] to California. We all trade and help each other find stuff that’s hard to find in the stores. The two of us are coming out here, and we help them get exclusives out here. That’s what brings us out”.

The architects, 39, used to go to Motor City Comic Con in Detroit. “We went, what three or four years”, LaMyron says, looking to his brother, “before making the big plunge—let’s just go to the big one. We came out here and haven’t stopped since”.

Motor City Comic Con, started in 1989 and occurring in mid-May, is among the many smaller comic-book conventions taking place around the country—meaning nowhere near as large as the San Diego gathering. But attendance is way up, 30,000 in 2013, with more than half the number on Saturday.

“We just never expected 18,000+ people to attend that day, which was the same amount of people we had over the entire three days last year”, Michael Goldman, Motor City Comic Con founder, says. “We were literally hit with a ‘Humanity Bomb’ and were not prepared for the sheer number of people attending, even with a large increase in our staff”.

The twins travel to attend a Con with four-times the attendees.

I ask how successful is their toy hunt, which already by the middle of the second day is essentially over. The brothers and their compatriots use a spreadsheet to catalog the toys, the collectors, and the budget. I ask what software they use. “Just Excel, nothing fancy, but lots of formulas to make sure we keep all the money together”, DaMarlon answers. “We’re old pros”.

“This year there wasn’t that much we really wanted”, LaMyron says, with a tinge of sadness. “The Hasbro 6-inch Boba Fett, we got that, and the Batusi Batman Mattel was selling. Other than that, we didn’t have our eyes out for a whole lot”. The budget is “about the lowest we’ve had”, he says, “as far as our own draw”. DaMarlon interrupts saying that $1,500 is down from $2,400 in past years.

The problem isn’t the overall economy. The group of eight are hardcore comic-book toy collectors, but they are part of a small market. “The toy industry is moving towards more kid-oriented type stuff, so even here there’s not as much stuff offered this year, which is what we’ve been seeing in the stores”, LaMyron says.

The push away from collectors is a recent trend. DaMarlon interjects: “Retailers want merchandise that sells a little bit faster. They want the licensed products and the brands, but they want it at a lower price point”. LaMyron interrupts: “Which means less articulation and less collector-like items out there on the shelves”. Collectors want “hyper-articulated” toys. “That’s what they’re used to, that’s what they want to see”.

Hyper-articulation refers to the number of points for movement, so that, say, an action-figure can be posed different ways. Generally, collectibles have more than five points of articulation. The twins see increasingly-limited distribution, with fewer offerings and more made available only online. LaMyron sighs, “Even here that’s more limited in the offerings this year”.

Which is the larger market? Collectors, or kids? The obvious answer infers much about the trend the Carter twins observe.

I’m not surprised that hyper-articulated toys, and the fine attention to movement and detail—heck, sculpture—appeals to a pair of architects.

The thought reminds me to ask about their professional achievements. DaMarlon’s claim to fame: Designing banks, in Michigan and California. His brother’s masterpiece, a restaurant, is gone. “It was basically hand-picked, hand-designed and directed by the mayor of Detroit himself, because he wanted this place to be somewhere he could take his VIPs offline. But it’s no longer there”.

I ask what happened, and the laughter starts. “They decommissioned it, basically”, LaMyron answers. “It was in the convention center, much smaller than this one”. During a renovation adding an atrium space, “that restaurant had to go”.