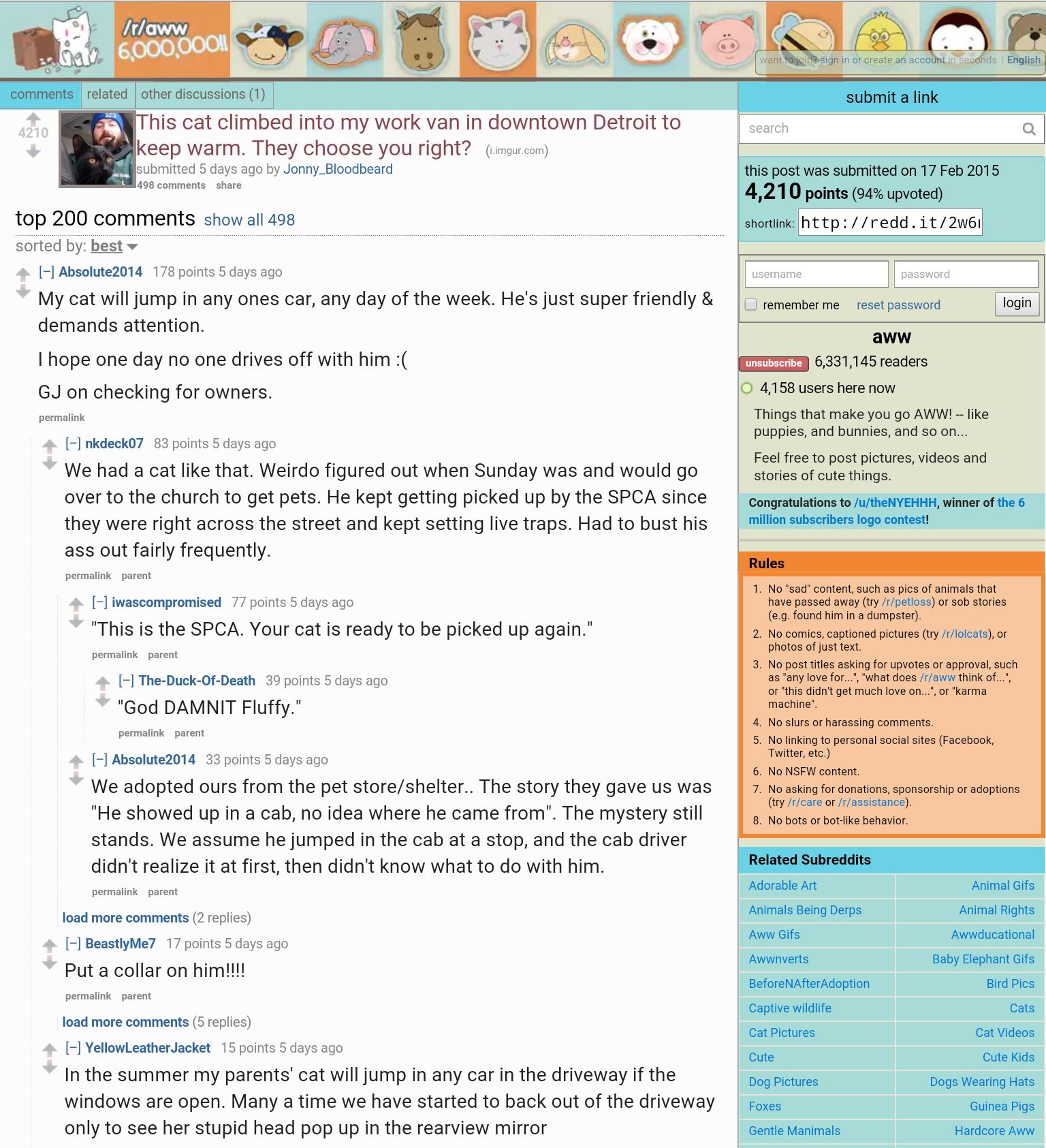 Friendly Banter
Perhaps cats in cars explain the many disappearances, based on nailisland’s experience: “I had a cat who did that. We thought she’d died until I found her at my friend’s aunt’s house over two years later. Turned out the aunt used live behind my house and my cat hitched a ride with her on moving day”.

Responder lethesbramble praises: “Good on you bloodbeard. I live just outside of Detroit and it’s too cold for anyone right now. My dog won’t even stay outside longer than it takes to pee”. A cold wave grips much of the Northern United States—five days ago when the post appeared and continuing today. Detroit forecast is -22 degrees Celsius overnight.

Miausie expresses concern: “If it’s well cared for it may have an owner looking for it”. Jonny_Bloodbeard answers: “The guy whose house I was at said it had been outside his place meowing for about two days. Also the neighborhood I was in had about 4 houses that weren’t abandoned, aaaand Vet checked for a microchip. So I think I’m in the clear. Thanks for the heads up though”.

The comment form hazmol is typical praise: “Sounds like you have been adopted. Thank you being (a) kind and accepting of your feline fate (b) responsible and bringing your feline owner to the vet (c) having an awesome beard and (d) having an appropriate and awesome Reddit handle. All hail Bloodbeard!”

Twitter FUs
The feline stories are refreshing after my experience on Flickr reading responses to San Diego Comic-Con’s tweet about tickets selling out. The first, in all caps: “@Comic_Con go for yourself”. The word appears 16 times in the full list of responses. I was lucky enough to buy pass(es) to the event and shouldn’t complain about gripers. But I must.

Let’s assume that the process for getting into the purchasing queue isn’t so random as some bitchers blame. What? They think telling the Comic-Con folks to fuck off will increase chances for another year? If I prioritized who deserved admittance more, the cussers would be blacklisted.

I would have been disappointed if shut out during yesterday’s SDCC 2015 Open Registration. But I wouldn’t think to tweet “fuck you”. From my public account? Common sense: “I’m fucking disappointed about not getting a Comic-Con ticket” is a thousand degrees cooler than “@Comic_Con fuck you”. Being civil isn’t just about politeness. Your online cred crumbles with many people. Then there is Karma.

Recruiter Matt Buckland tweeted six days ago: “Karma—the guy who pushed past me on the tube and then suggested I go F myself just arrived for his interview…with me…” I dismissed the social share as another Internet prank. The coincidence is just too good a story to be true. Except, it is.

Jim Webber asks: “for reals???”. Matt answers: “yep… I asked lots of questions about the tube until it slowly started to dawn on him…”