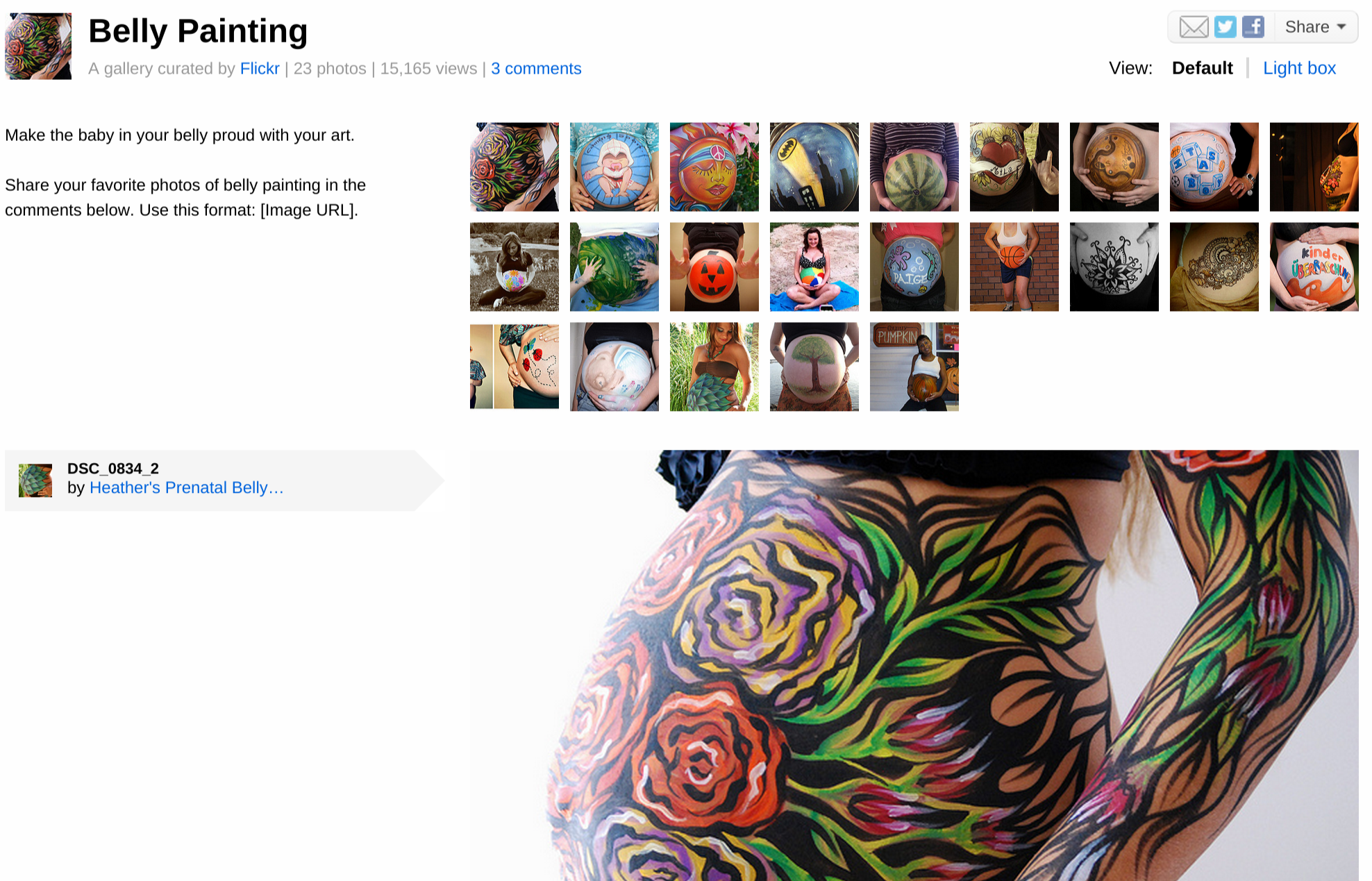 Sometimes I am shocked to find myself out of touch with popular culture—and that’s a terrible admission living in Southern California, where pronounced body art can be seen everywhere. Yet, not until yesterday’s Flickr Blog post “Belly Paining” and link to small gallery of photos had I ever seen such a thing.

Yeah, my wife and I are middle-aged parents with a daughter in college—removed from immediate contact with expectant-mother lifestyle. Nevertheless, how in the land of tattoos could I miss something so interesting, creative, and personally expressive? What a wonderful way to celebrate the joys (and hardships) of pregnancy.

Here I am clueless, wondering how. I really need to get back in touch with society and culture, which fascinates me. Because I am a people voyeur. I registered the joewilcox.com domain in December 1999, and for the next 9 years called the site “Chronicle of Technology, Culture, and Stupidity”. I’ve thought about bringing back the name and return to a more storytelling style about living and analysis of change sweeping society. Some long-ago examples:

These are randomly grabbed, and the best society and stupidity posts are a decade old. Some of the best are archived and need to be brought back online.

So we come to “Belly Painting”, while new to me is nothing new at all. Amazon sells do-it-your-self belly-painting kits, as do other retailers, including Bed, Bath, & Beyond. Get out the mirrors, ladies, or ask your significant other’s assistance. The company manufacturing the product has a Pinterest packed with painted bellies.

Writing for The Guardian in October 2012, Anna Pickard asks “Bump painting: a pregnancy trend?” Searching for “bump painting”, the more sensible term, really brings up the goodies. Two examples: From United Kingdom, Cassandra Stephens’ “Pregnancy Art” (see the Facebook, too). Carrie Preston’s Bored Panda confessional: “It May Seem Completely Mad, But I Paint Bumps!” You gotta see the “Bump Gallery” from her site.

Naturally, there would be some bump-painted celebs, such as Alanis Morissette or Hillary Duff, lurking behind the trend.

After seeing the “Belly Painting” gallery, I wanted to feature one of the photos today as part of my Flickr-a-Day series. Sadly, the pics are All Rights Reserved and my project only showcases art released under Creative Commons license. That also explains why a screenshot of the gallery icons illustrates this post.