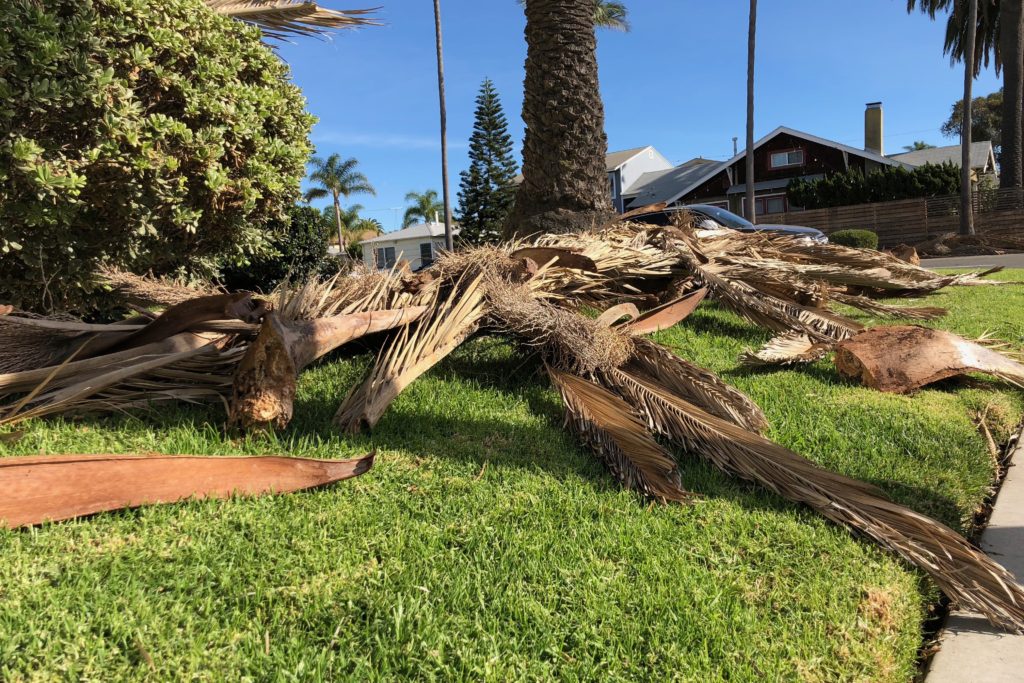 Late yesterday afternoon, I walked over to University Heights West to survey the wind damage around our old place. Palm fronds littered roads and sidewalks pretty much everywhere. Strong Santa Ana winds, unusual for this time of year, roared through San Diego County, driving raging wildfires north of the city.

At the corner of Cleveland and Monroe Avenues is a massive-trunk palm tree that dominates the intersection and much of the street. As I walked up, a young woman had just finished collecting the fallen fronds. She was being neighborly, by picking up debris that littered sidewalk and street. But taking risk. Even when winds aren’t roaring that tree drops chunks.

Turns out she is new to the area, having rented a condo in the building next door to our old apartment of 10 years. Her husband, a military musician from New Jersey, and she, a native Pennsylvanian, moved here last month. He will play for the navy, and they expect to stay for a four-year stretch, if not longer.

There was something reminisicent talking to someone from the East Coast and remembering through the interaction our first weeks in San Diego. We moved a month earlier in the year, but the overall first impressions—temperate climate, citrus growing on property lawns, Christmas out of season, and Costco’s outdoor eatery—are similar.

Today, I hauled up there again, after walking to Trader Joe’s and finding the grocery is sold out of frozen peppers (I skillet them with onions in batches to add to other meals). The Featured Image, shot with iPhone X, shows the debris below that lovely palm. Vitals: f/1.8, ISO 20, 1/1215 sec, 4mm.